The Crystal Palace continued to be closely linked to the club during the early years and prior to the commencement of the second season St. Albans held its Annual General Meeting at the public house on Monday, 11th September 1882.

Early in the season, on Tuesday, 7th November, the Crystal Palace was also the venue for the Saints first annual supper. For the AGM, Mr Masters was in the chair with the most noteworthy change to the club being the promotion of James Robert Ball to Hon. Secretary with Mr Harris keeping control of the Treasury.

During the first season there was an unsettled look to the team but for the 1882-83 campaign the approach was more organised with Fred Gentle being the recognised goalkeeper, a position he was to hold for the next five seasons. Having lost all of their six away matches during the inaugural season the Saints fared much better a year later with away wins recorded at Watford Rovers and Great Berkhampstead School. Hitchin Town were defeated at St. Albans for a second time and Watford Rovers suffered a second defeat of the season at the hands of the Saints after making the short trip across the county.

The constitution of the team itself changed little from the first season with just a handful of new faces making their way into the team. The leading goalscorer was the Rev Faning. It is known that the club played two second XI fixtures during the course of the season, both were against the Grammar School at the latter’s own ground off Holywell Hill. The School side romped to an 8-1 victory first time out with the Saints readdressing the balance in the return fixture with a 2-0 success.

Towards the end of St. Albans' second season the club played a London club by the name of Clarence for the first time. Clarence consisted of players employed by the Tottenham Court Road-based London furniture store Maple's, whose owner, John Blundell Maple, was to play a significant role in the development of the Hertfordshire club. Clarence won that first meeting, at St. Albans, 2-0. In the return match at Wormholt Farm, west London, the tables were turned with St. Albans winning 3-0 on 31st March in what proved to be the final game of the season. This game is believed to have been Fred Sargent’s first for the club and, as befitting the prolific goal scorer that he was, he netted all three goals that day.

Fred Sargent OBE scored a known 84 goals in a known 52 appearances for St Albans between 1883-95. He once scored 15 times in a single game and is second only to Sandford Moore (93 goals) in the list of goal scorers for the original St Albans Football Club. He also scored 161 goals in 152 games for Watford in that club’s various guises (Watford Rovers, West Herts, Watford). Prior to making his way in football he was a noted sprinter and won various awards in the 120 yards category. An all-round sportsman, he was also a fine opening bat and wicketkeeper for West Herts Cricket Club. He was awarded the OBE for almost 50 service with the LNWR. Fred was born to Charles and Rachel Sargent on 10th March 1858 and died on the 34th anniversary of the formation of St Albans City, 13th April 1942. 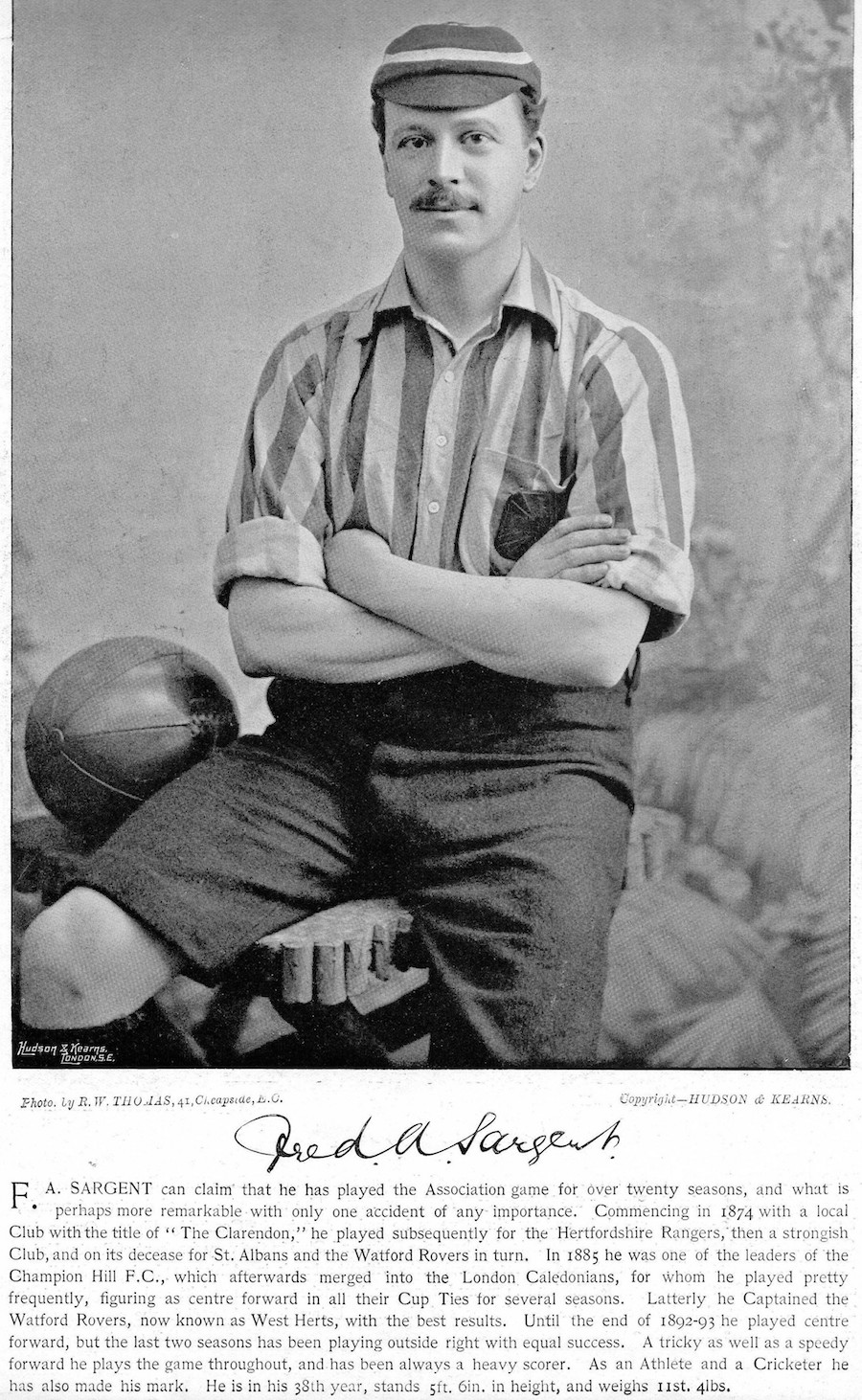 Finding the match line-ups for each game proved more difficult for this season than any other. The Herts Advertiser states that 16 matches were played (seven wins, two draws, seven defeats), but the results for just 13 games have been found.

We have 135 guests and no members online