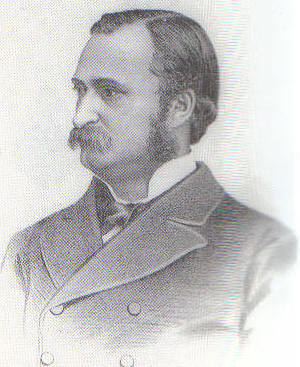 Sir John Blundell MapleThe possibility of Clarence Park being made available to the general public, rather than continue as a piece of privately owned land, first came into the public domain when Sir John Blundell Maple, whose property Clarence Park was, wrote to the St. Albans council on 19th September, 1892, to inform the corporation of his intention to present the park to the local citizens.

Sir John had obtained the park from the estate of the Earl of Spencer during 1891 at a cost £10,000, although he also had to purchase some land adjoining the park from Henry Frederick Conrad Sander, a well-known German-born flower grower and exhibitor. In his letter to the council Sir John made plain the point that he saw Clarence Park as the ideal ground upon which Hertfordshire should play their county cricket matches. He spoke of part of the park being a Recreation Ground and the remainder given over to the Cricket Club. He offered to level the two grounds that constituted Clarence Park, and make all roads, paths, a cinder track and fencing as necessary. Sir Blundell also stated that he would erect a Lodge facing the new road (Clarence Park Road, later renamed Clarence Road) that would run between Hatfield Road and Sandpit Lane.

His intention that the grounds should forever be for the benefit of the townsfolk was outlined in the sixth paragraph of his letter;

‘I do not wish to make any conditions as regards the Recreation Ground, beyond one that it shall be always held as a Recreation Ground for the benefit of the town of St. Albans and the neighbourhood.’

Although he was patron of the Football Club for the 1894-95 season, and later club president, it was evident that Sir Blundell’s main interest within Clarence Park was with the Cricket Club, which he also served as patron. He suggested that members of the St. Albans Cricket Club pay an annual subscription of one guinea - payable to the corporation - this would also guarantee the admission of a member’s good lady to the ground and pavilion. 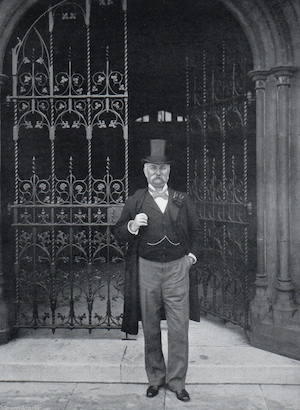 Sir John Blundell MapleBy the time Clarence Park had been officially handed over to the people of St. Albans, Sir John had already earned the affections of the St. Albans townsfolk through the £7,000 he paid for the construction of the Sister’s Hospital. Then, three years after the opening of Clarence Park, he funded the construction of convalescence homes in Harpenden. 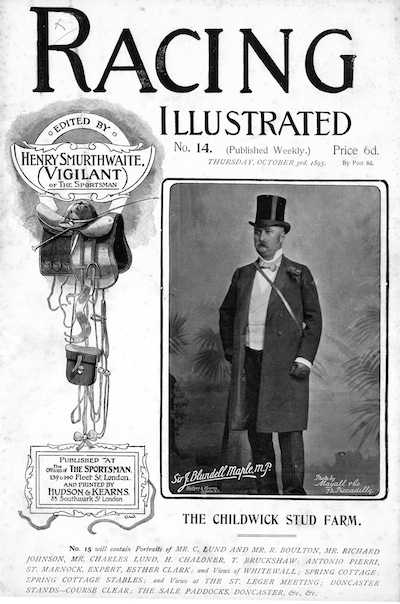 Sir John lived at Childwickbury Manor on the northern outskirts of the city, accessed via the Harpenden Road. He purchased the sumptuous mansion, stables and grounds from Henry Joseph Toulmin in 1880, who himself had taken possession of the property nine years earlier following the death of his father - Henry Hayman Toulmin J.P. - the latter owned Childwickbury for seventeen years.

Blundell Maple, as he was at the time of his move to St. Albans, was far from the first resident of Childwickbury to have connections with the House of Commons as two members of the Lomax family, who owned the land for many years, had previously represented St. Albans at Westminster. Blundell Maple, though, was the M.P. for Dulwich rather than St. Albans. In Parliament, Sir Blundell was a champion for the working classes and of those suffering hardship, his generosity and speeches featured regularly in the local press despite him never being the M.P. for the locality in which he lived.

John Blundell Maple was born at 145 Tottenham Court Road, London, the site of the famous Maples furniture store, on 1st March 1845. The family-owned Maples store, launched by his father John Maple, retained its name until the last couple of years of the 20th century when it was sold off and renamed Furniture Village. Sir John was one of the leading horse owners of his day with the ground at Childwickbury providing excellent space for training his charges. Still standing today in the grounds adjacent to Childwickbury Manor are the stables in which his horses were kept. These have since been converted into offices, it was from there and the Manor, that the filmmaker Stanley Kubrick worked until his death in 1999.

While racehorses and racing may have been his first love, Sir Blundell retained a close contact with football during the latter part of the 1890s, as he was elected a vice president of the Herts F.A. for a number of years. 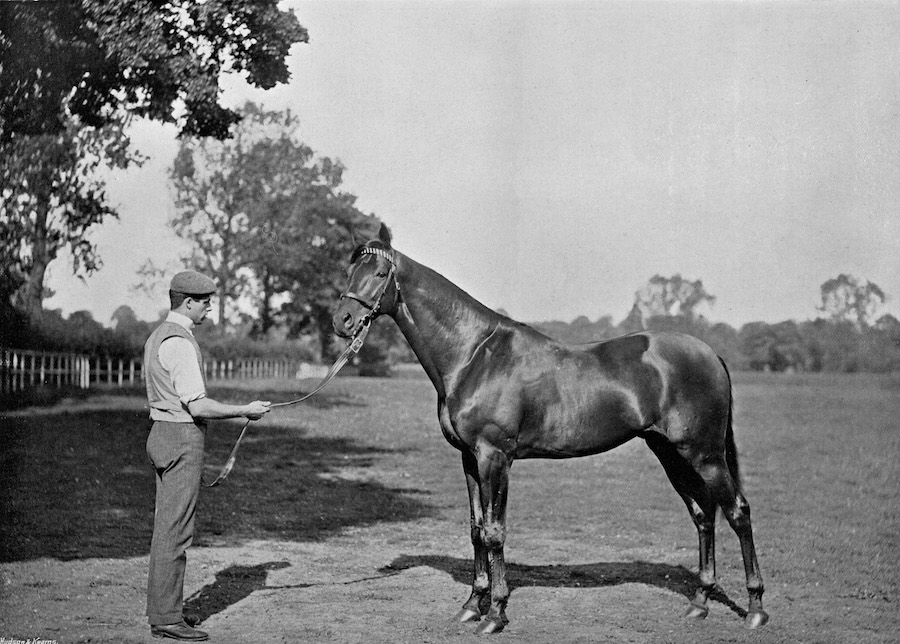 Pictured is one of Sir John’s horses, Childwick, that won the Cesarewitch at Newmarket in 1894. One of his many other horses was named Clarence.

Unfortunately, Sir Blundell, who was knighted by Queen Victoria at Windsor Castle on 2nd December 1892, did not enjoy the best of health and in the year leading up to Clarence Park being handed over he was laid low. Due to his ill-health a decision was taken to withdraw his horses from racing, as it was felt that the excitement could do further damage to his well-being and, needless to say, he also temporarily retired from the Houses of Parliament. It was feared at one stage that he would not recover from his illness but following a spell in Brighton from September through to December 1893, his well-being took a turn for the better.

Although he was healthy again by the summer of 1894, he suffered badly again in later life and died at 2.10am on 24th November 1903, at his Childwickbury Manor home after a prolonged illness. At his deathbed was his wife along with two doctors, a servant and three close friends. Four days after his passing Sir John Blundell Maple was laid to rest in the vault adjoining the Church of St. Mary at Childwickbury, Lady Maple and their three daughters have since joined him. When Sir Blundell died the Baronetcy passed with him as he had no sons to whom the title could pass.

Aside from the poor health which blighted much of his life Blundell Maple had a shock in the early spring of 1887 when the French town of Menton (near Monaco), in which he was staying, was shaken by an earthquake, fortunately neither he nor any of his entourage were injured. Given Sir Blundell's outstanding achievements as a racehorse owner it was most fitting that the next owner of Childwickbury was Jack Barnard Joel, a hugely figure successful in the racing world and a close friend of the Royal Family, members of which would occasionally dine at the Manor during his time there.

The Opening of Clarence Park and Recreation Ground 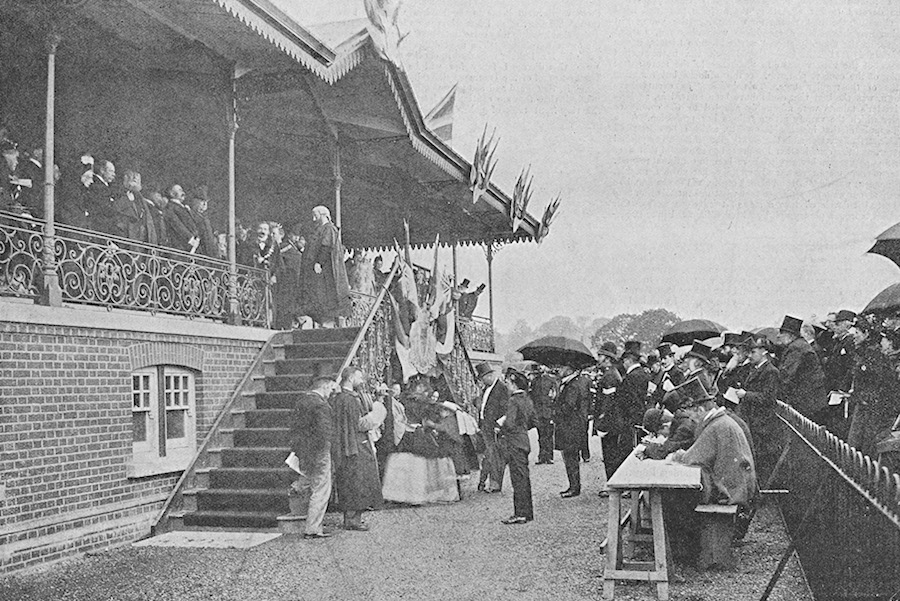 Sir John Blundell Maple (second left of the second post) and the Mayor of St. Albans (to the right of that post and wearing the chain of office) can be seen at the front of the pavilion during the opening ceremony. Photo courtesy of the Illustrated News.

The opening of Clarence Park was set for Monday, 23rd July 1894, with a glittering array of well-to-do people amongst the thousands who braved a wet day to witness the occasion. The passing over of the park was billed as ‘The Opening of Clarence Park and Recreation Ground’, making a clear distinction between the various sports grounds and the area set-aside for families to enjoy a peaceful stroll. 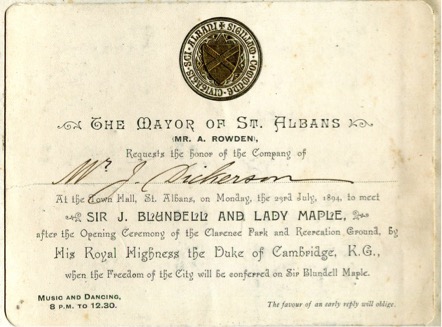 Leading the speeches was H.R.H. The Duke of Cambridge while further words were said by the Mayor of St. Albans, Cllr Albert Rowden, St. Albans’ Town Clerk Alfred Debenham and, of course, the M.P. himself, Sir John Blundell Maple. To mark the occasion, and the gift to St. Albans of the Sisters Hospital, the Mayor presented Sir John with the Freedom of the City which was contained in a casket and bore the coat of arms of both the city and the M.P. The initials ‘J.B.M.’ were inscribed on the cylinder. The casket was highly decorated and lavishly lined in velvet and bore the words, ‘This casket was presented to Sir John Blundell Maple, M.P., on the occasion of his receiving the Freedom of the City of St. Albans, 23rd July, 1894.’ Sir John was the first person to be so honoured. 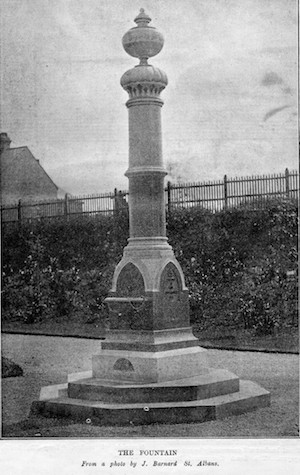 Clarence Park FountainThe dignitaries were joined in the pavilion by approximately 240 specially selected guests while those invited to look on from the enclosure in front of the stand numbered around 450 to 500. The names of all who accepted invitations were published in both the Herts Advertiser and the Hertfordshire Standard. Outside of the enclosure many thousands of local citizens thronged the park, the scene was described as, ‘a sea of heads.’

In his speech Sir John, who was accompanied by his wife Lady Maple and their surviving daughter, Grace, again stressed his desire to see Clarence Park become the centre of Hertfordshire cricket and also spoke of his wish to see the park develop into an athletics ground of some importance to the south of England. Lady Maple, too, was able to make her mark on the occasion as she was accredited with donating the water fountain that was, and remains as, one of the outstanding features of the park.

Once the speeches were concluded the spectators were able to walk around the park for the first time and as the light began to fade a dazzling firework display took place while later in the evening the mayor held a reception for his honoured guests at the Town Hall. Around 700 people had accepted an invitation be present at the Town Hall function. The entire city entered into the spirit of the occasion with numerous streets being decorated gaily as were shops and private houses.

The sheer number of Lord’s, Ladies, Mayor’s, Judges, etc, who attended the event was staggering while there was also a large military presence. Along with the 1st Life Guards Band and the St. Albans and Watford Volunteer Bands, formed a guard of honour from the lodge at the entrance to the park from Clarence Road up to the pavilion for the Duke and Sir Blundell. Included in attendance were a number of personnel connected to the football club. 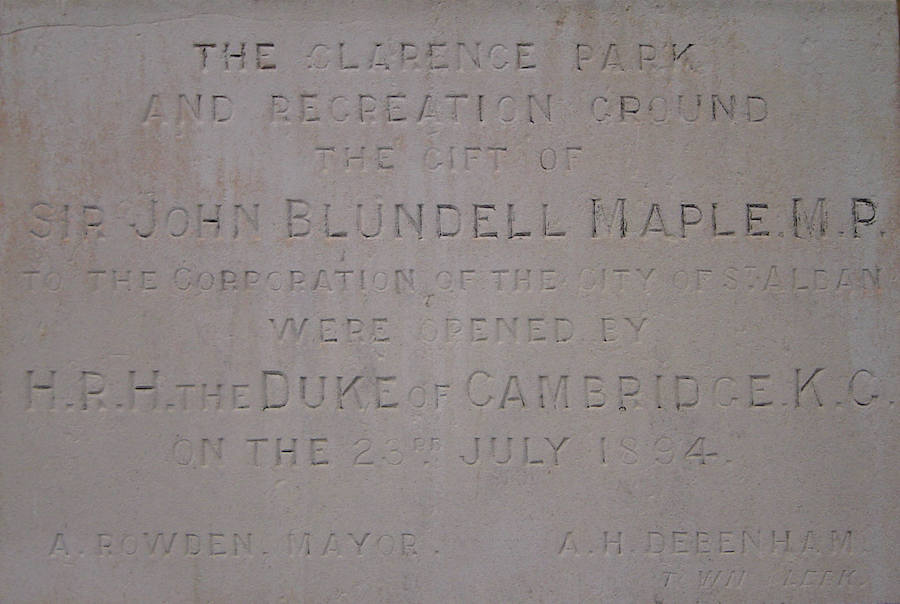 At a council meeting on 7th August, Alderman Christopher Miskin proposed that a granite tablet, bearing the names of Sir John Blundell Maple, the Mayor and the Town Clerk, be inserted in the pavilion wall facing what is now the car park side of the building. Although weathered, the stone is still legible today.

The first big sports event to be staged at the new public park was on Monday 6th August, with the Annual Cricket Club Sports taking place. Several events were to be contested purely between members of the Cricket Club and Football Club, which, consequently, enabled a number of the Saints footballers to collect some handsome rewards. John William Sharpe, for finishing second in the one-mile handicap, was presented with an inkstand which was somewhat less impressive than the prize carried home by his brother Ernest Michael Mannock Sharpe. He, after winning the 120 yards handicap race, was handed a case of champagne glasses. In the 440 yards handicap, Jack Dickerson, after receiving a 15-yard start on the favourite, finished in third place and was duly presented with a very useful pair of opera glasses. Dickerson’s invitation to the opening ceremony can be seen earlier in this article. 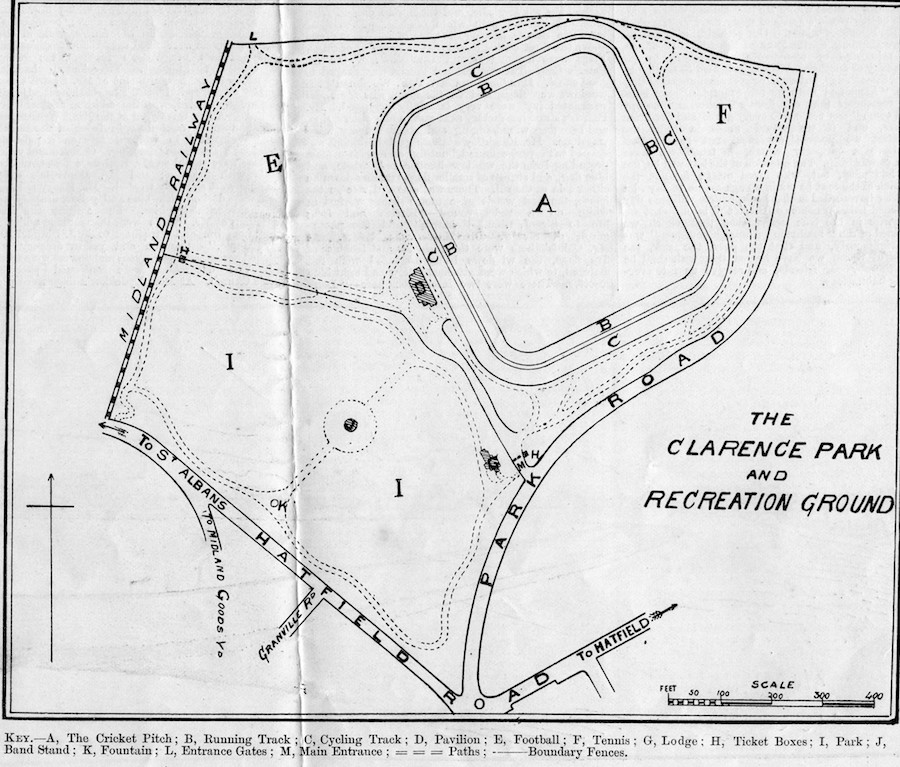 We have 91 guests and no members online