Some of these players were no strangers to Clarence Park with Alfred Seabrook, Albert Sharp and Herbert Warwick having all played for St. Albans Amateurs. Seabrook and Sharpe also played at the Park as members of the now defunct St. Albans Abbey club, as did future St. Albans City players Eddie Anderson, William Hilliard, Tommy Noel, Jack Rainsden and Cecil Sharpe.

The Old Albanians, tenants of Clarence Park following the demise of the Abbey club, also supplied a player in Leslie Hosier who was to play a significant role for the City club over the next six years. Hosier had also played for the Abbey club and whilst with them, during the 1906-07 season, he made four appearances for Hertfordshire in the first season of the Southern Counties Amateur Championship. On 16th December 1908 he became the first St. Albans City player to be selected for the county when Herts went down 2-1 to Oxfordshire in Oxford. Hosier was joined in the Herts side by fellow Saints Charlie Patrick and George Webb for a 2-1 defeat to Surrey at Godalming on 31st March. One member of the squad for whom playing football at Clarence Park may have been a new experience but playing at the Park itself was not was Hugh Day who, in addition to being a footballer with Hertford Horns during 1907-08, also played Rugby on the football pitch for Herts Wanderers. 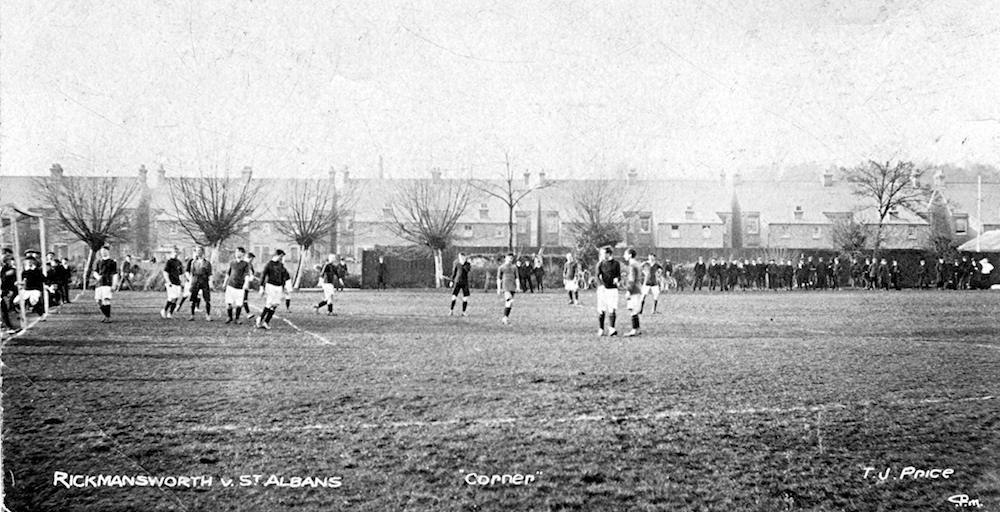 Rickmansworth v St Albans City 12th December 1908As discussed back at the time of the formation of the club, the Saints adopted the city colours of blue and gold into the kit. The shirt was predominantly blue with gold on the collar and a large gold band between the elbow and wrist. The players wore white shorts, it is believed the socks were dark blue.

The first game for the new club was on 5th September when a Reserve XI drew 1-1 with local Mid Herts League side Abbey United in front of around 200 spectators. In the Abbey United line up were George Meagher, goalkeeper Herbert ‘Micker’ Smith and Webb Richardson, all of whom were to turn out for the Saints in the weeks to come. The teams were greeted onto the pitch by members of the Beaumont Band, who were granted permission to perform at all home matches throughout the season.

The First team were seen in action at Clarence Park for the first time the following Saturday, 12th September, when two goals from Tommy Walker and a single from G.Habbijam secured a 3-0 win over Clove, this was a club consisting of Old Boys from the London Grocers Schools.

The eagerly awaited first competitive match for St. Albans City was an away Herts County League fixture at Leavesden where, remarkably, an estimated 1,000 spectators saw Hugh Day open the Saints account during a 1-1 draw. Over the course of the 1908-09 season City were to play a dozen County League matches, the Spartan League added just a further eight matches to the fixture list. Due to such a low number of games the club fitted in a further six friendly matches, the first of these, on 26th September, saw the Saints run riot with Tommy Walker scoring four times and Hugh Day three as Eton Mission were crushed 10-2.

October kicked off with City entertaining the strictly amateur Upton Park club in an FA Cup Qualifying Round tie. A crowd estimated in the region of one thousand saw Habbijam score again as the side battled out another 1-1 draw. In the replay, played on the following Thursday, 8th October, Hosier became the first City player to score twice in a match but could not save his side from going out of the competition as the London club won 3-2 in front of just 22 spectators.

The rest of the month went badly for St. Albans as they went down to their first County League defeat, 1-0 at Hemel Hempstead, out of the Herts Charity Cup, 4-2 at home to Hitchin Blue Cross, and, most emphatically, out of the Amateur Cup 8-1 at home to the powerful 1st Scots Guards. The Chelsea-based Guards had been drawn at home but agreed to switch the tie to Clarence Park. City had been due to participate in the Herts Senior Cup, they were drawn away to Apsley, but were forced to withdraw from the competition, as they were unable to field a team of players all born or living or working within five miles of Clarence Park as per Rule 3 of the tournament.

The First team played just three matches during November of which only one was a competitive fixture, but at last the club tasted victory in a meaningful encounter as Redbourn went down 2-0 at Clarence Park in the County League with Walker netting twice. The win over Redbourn signalled an upturn in the Saints fortunes, as the run of six winless matches was washed away by an 11-match unbeaten run which, away to South Weald (Warley Road) on Boxing Day, included St. Albans first success in the Spartan League.

City saw in the New Year in style going unbeaten throughout January and February as a serious bid was launched to win the Herts County League at the first attempt. Successive wins over Apsley, twice, Harpenden, Hemel Hempstead and Leavesden secured the Saints place in the pay-off finals – the club could even afford to go down 8-3 at home to Rickmansworth in its final game without damaging the league position. The home win over Apsley, 2-1, would have been more convincing but for missed penalties by both Hosier and Bennett.

Although the Herts County League programme may have been over City still had five Spartan League fixtures to fulfil during April but, after starting with a 4-3 home win over Chelmsford, the Saints were soundly beaten in the other four including an 11-2 drubbing at Luton Clarence where no First teamers featured and Luton forward Lane helped himself to seven goals, a tally which still stands as the record by an individual against St. Albans City. That result, which is also one of only three occasions when City have conceded ten or more goals in a competitive fixture, enabled Luton Clarence to win the Eastern Division on goal average but they were beaten 4-1 by Western Division champions Aylesbury United in the championship play-off. City’s interest in the destiny of the championship had long since evaporated and the docking of two points for fielding an ineligible player merely confirmed the Saints would finish bottom of the table. St. Albans tried to reclaim the points but lost an appeal that cost the club £2 2s.

In mid-April, City turned their attention back to the Herts County League where they faced Welwyn and Ware in a three-club play-off final. A goal from H.Green secured victory over Welwyn at Hillside and despite two goals from George Butcher the Saints could only draw 4-4 with Ware who took the title having defeated Welwyn 4-1. But Ware’s success was not achieved without some pain for the play-off with St. Albans was littered with fouls and the home fans took exception when Hosier was roughly treated. As the sides left the Clarence Park enclosure to head for the changing rooms situated in the cricket pavilion outside the football ground, one Ware player, North, was attacked and suffered a badly cut and bruised eye.

Winning the Western Division of the County League in their first season was a fine achievement for the club and the Reserves also went close to getting their hands on silverware when reaching the final of the Bingham Cox Cup. En route the final the Reserves won 11-0 at Flamstead, with George Butcher scoring four times and A.Sargent three. Frogmore United were defeated 6-1 in a replay and St. Michael’s 2-0 in the semi-final at the home of Dagnall Street FC. But the Reserves came unstuck in the final at Clarence Park where Hatfield United won 1-0 on Easter Monday. A regular in the Reserves was Albert Trulock who also made three appearances in the First team. Just over 80 years later the family link was maintained when the great-grandson of Albert’s brother, Steve Trulock, became hon. secretary.

Former Redbourn and St. Saviours forward Tommy Walker, with 13 goals in 20 league appearances, was the Saints leading marksman with Leslie Hosier just three goals behind. A grand total of 47 players represented the club in its 26 league and cup matches, although the side was more settled than it may appear as 30 players made four or fewer appearances.

George Butcher began the season in the City Reserves but displayed great promise and by March was, along with Leslie Hosier and Charles Patrick, called up for the Hertfordshire county team.

The season was not without its share of heartache. During the early stages of a County League match at Harpenden on 20th February Tommy Noel, ever present up to this point, suffered a broken leg. Shortly after Noel’s departure City also lost H.Green through injury and had to go through the final 70 minutes with just nine men, but thanks to Tommy Walker’s tenth goal of the season and a Leslie Hosier penalty the Saints won 2-1. The game was roundly criticised in the press as players on both sides sought to punch and kick each other. Noel’s injury not only ended his career with St. Albans but also prevented him from working for the next six months. The F.A. Benevolent Committee awarded Noel £5 compensation due to his injury.

Clarence Park played host to 14 competitive games during the season that attracted 12,536 spectators. Figures produced at the time, which do not make clear whether friendly matches are included, show that 9,922 adults and 2,614 boys saw the Saints play at home. Admission prices were 3d for adults and 1d for boys; this amassed a sum of £320 but did leave the club with a deficit of £5-16-11. There was an additional charge for a seat in the original stand that housed 400 spectators.

We have 133 guests and no members online