City lost just one player during the summer from the squad that had challenged strongly for the Spartan League title for the two previous seasons with Charlie Patrick joining league and county rivals Barnet Alston. The new arrivals included Sammy Hatton, who would line up alongside Ernest Grimsdell, the Redbourn-based Jimmy Brandham, and forward George Edmonds.

Brandham and Edmonds featured in City’s one pre-season fixture, a 3-3 draw with Plumstead at Clarence Park on 2nd September and Finsbury-born Edmonds gave notice of what was to come by scoring two of City’s three goals. He repeated the trick for the Saints opening league game away to Chesham Generals (Berkhamsted Road) the following Saturday.

After going close to their first Spartan League championship the previous season, St Albans City set a phenomenal pace at the start of the 1911-12 campaign with wins in all of the opening seven fixtures. Most importantly the run included a 2-0 win over the champions for the past two seasons, 2nd Coldstream Guards, with both goals coming from George Edmonds. Watford-born Edmonds scored nine times in those opening seven games and over the course of the next two seasons he virtually maintained that goals per game ratio prior to moving into the Southern League with Watford and then the Football League with Wolverhampton Wanderers.

The winning run ended with a draw at home to Tufnell Park but it was nothing more than a temporary blip as City bounced back with ten successive Spartan League wins which included six clean sheets. 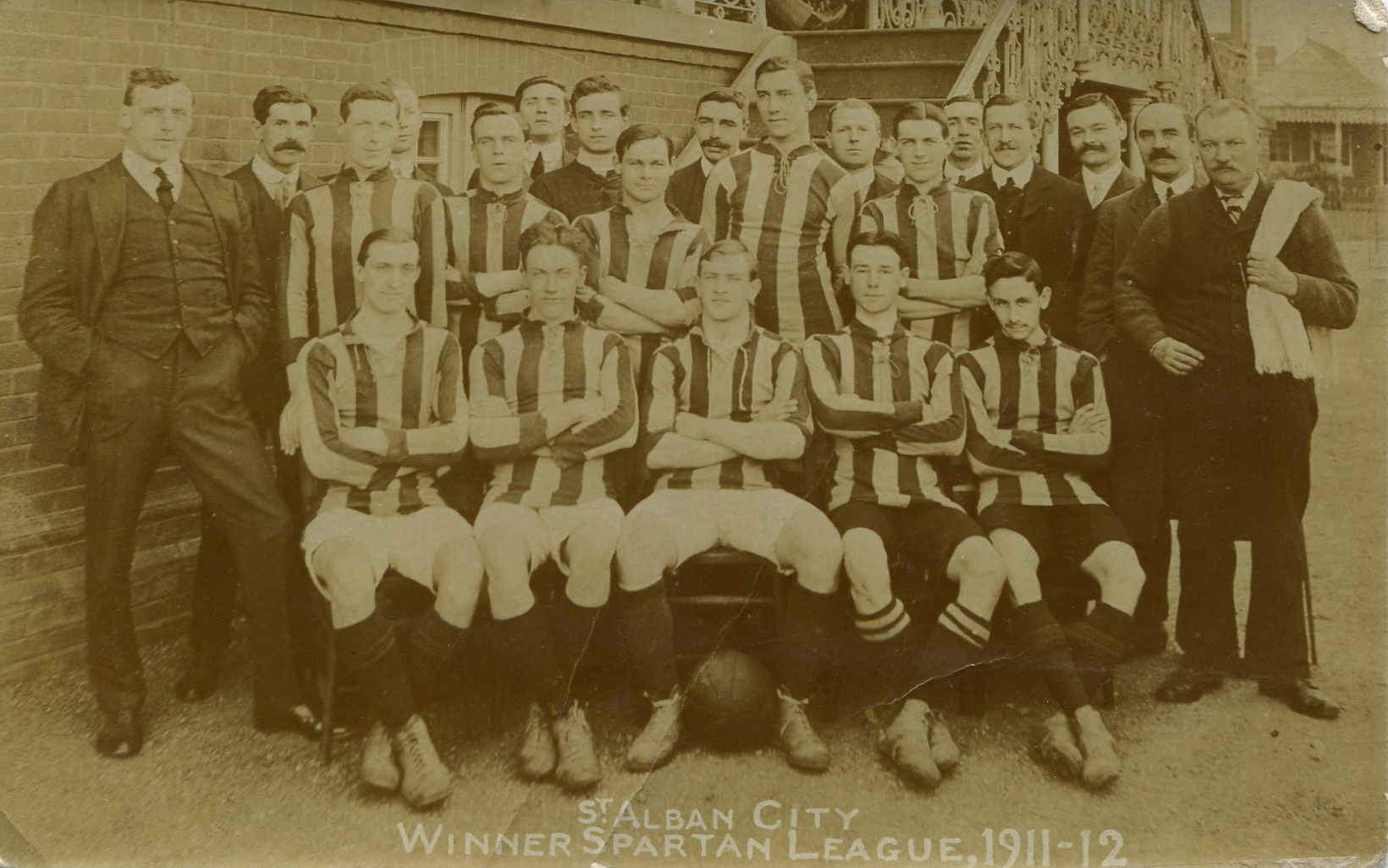 1911-12 Spartan League ChampionsWith six games to play the championship was in City’s grasp although the 2nd Coldstream Guards were again challenging hard. The gap between the two leading clubs was reduced when City went down to a 2-0 defeat to the 1st Grenadiers on 9th March, at the West Ham Memorial Grounds that was said to be virtually devoid of grass. It was ample revenge for the 1st Grenadiers who had already been seen off 4-0 at Clarence Park in a game that saw young Bertie Beech net City’s only league hat trick for the season.

City responded to that setback with a 4-0 away win over East Ham United that was played at Clarence Park before the Guards threw the title race wide open with a 2-1 victory over the Saints at Burrton’s Court, Chelsea. The destiny of the title, however, was still in City’s hands and with three more clean sheets and, significantly, three wins from the final three matches the championship, by just a single point, was indeed on its way to Clarence Park.

Such was the dominance of the two top clubs that third placed Sutton Court finished the season 16 points adrift of the runners up. The season closed with City, as champions, playing hosts to, and drawing with, The Rest of the Spartan League. The championship trophy was proudly displayed in the window of Elliotts Music Warehouse in Chequer Street, St. Albans.

The match which saw City clinch the title brought together four goalscorers for whom there were to be greatly contrasting fortunes over the coming years. In the 5-0 win over Tufnell Spartans on 20th April Edmonds scored his 26th league goal of the season from just 22 appearances and was already alerting the professionals as to his potential. Archie Michell, a carpenter and scorer of the opening goal, later emigrated to Canada. Arthur Wiggs, who scored twice, and Oliver Summers (one goal) had their short lives cruelly terminated during the Great War (details of which can be found on ‘The War Years’ section of this site).

Away from the Spartan League, City found success hard to come by with cup football not to their liking. In the FA Cup 1st Round Qualifying two goals from Ernest Grimsdell, including one from 40 yards, earned a 2-2 draw at Chesham Town before a brace from Edmonds set up a 3-0 replay win. In the next Round City again found Barnet Alston to be an insurmountable object and went down to a 2-1 home defeat. St Albans led at half time courtesy of an own goal but a brace by F.Ridley, who played one game for City on Boxing Day 1908, ended hopes of further progress.

The Saints also made a 1st Round exit in the Amateur Cup with the physically stronger 2nd Grenadiers coming to terms the better of the two sides in wet conditions at Clarence Park following heavy rain overnight and on Saturday morning. City’s cause was not aided by captain Tommy Walker suffering a knee injury that severely restricted his contribution, the Guards took full advantage to won 2-0.

100 up then Tommy Walker sidelined

The injury ended Walker’s season and it was not until November 1913 that he again appeared in the City First team. Walker picked up his injury on 6th January 1912, six weeks earlier he became the first player to complete 100 games for the club, Micker Smith was just behind him on 96 games. Earlier in the season Walker had succeeded Alfred Seabrook as captain and was, subsequently, replaced by Leslie Hosier.

St Albans entered the Herts Charity Cup at the semi-final stage but after taking two games to remove Waltham Glendale could not stop Barnet Alston from lifting the trophy with victory at the Park. In front of a crowd numbering close on 2,000 Arthur Wiggs scored for the locals while former Saint Webb Richardson grabbed one the visitors two goals.

Jimmy Brandham was City’s only ever-present player (31 games) while Micker Smith kept 14 clean sheets in his 30 appearances. Nine players were regulars in the team during the season but ten players did appear for either one or two games. Two players who made their debut during the Saints inaugural 1908-09 season, Harry Davis and George Price, made their final appearances for the club. After the departure of Davis, who opted for a new life in America, just two players remained from City’s very first game.

Honours continued to come the way of City players with George Meagher representing the Spartan League during a 4-3 defeat to the Isthmian League at Aylesbury in a game staged on 4thMay to raise money for the ‘Titanic’ disaster fund, £15 was raised from the match.

Meagher also made one appearance for Hertfordshire and was joined in the county side by fellow Saints Jimmy Brandham (2 apps), Harry Davis (1), George Edmonds (1), Ernest Grimsdell (4) and Fred Palmer (1 and 1 goal). Also in the Herts team, for two games, was Arthur Grimsdell who made his final appearances for the county before signing professional forms with Watford. Another Hertfordshire player who, despite not making his City debut until the following season, was listed as a member of St Albans City was W.B. Clark. At the start of the season, in September, he had trials with Tottenham Hotspur.

Aggregate attendances for the season at Clarence Park, where the City Prize Silver Band provided the half time entertainment, totalled 23,158 at an average of 1,007 per game.

To mark the achievement of the Club in winning the Spartan League title, the players and officials were entertained with dinner at the Town Hall on Saturday, 13th July 1912.

Presiding over events was the Mayor of St Albans, Councillor E.Dunham who confessed that he knew little about football and the first game that he’d ever seen was the during the past season on the Saturday after Christmas (30th December 1911) at Clarence Park.

Various speeches were given from a variety of club members while Ernest Grimsdell, who was given a rousing reception, and Arthur Wiggs spoke on behalf of the players. Committee member R.J. Maynard organised the event that was attended by around 70 people.

City chairman J.Roe also gave a speech in which he praised the achievements of the players and the part that they played in bringing honour to the ancient city and district.

We have 70 guests and no members online