The 1978-79 campaign was a pretty dismal period in the history of St Albans City as we went into the campaign in complete turmoil.

Manager Bob Murphy had built an improving side during the previous season and headed off on holiday satisfied to have secured a slightly improved budget for the forthcoming season. He returned to these shores three weeks later tanned and then fuming red when he learnt that the club had not only gone back on the promise of an increased budget but had slashed the original figure by fifty percent. Needless to say, Bob resigned.

City turned to former player Dennis Gibbs (148 appearances, 1 goal) to fill the void. At the time of his appointment Dennis, a one-time manager of Hemel Hempstead Town and father of long-serving Watford player Nigel, was an unpaid scout at Vicarage Road. With Murphy gone and the budget cut, virtually all of the squad departed and at his first training session Gibbs had in the region of just five players to work with. He admitted that rebuilding the side would take far more time that he could commit and, reluctantly, stood down just a week after taking on the role.

One day later and City turned to Maurice Walby (82 app, 10 gls) to become the third successive former player to be appointed as manager at Clarence Park . Maurice, a former England Amateur International, was a Youth team scout for Tottenham Hotspur and pinned his faith in young, local talent to steady the ship.

Experience in the squad was pretty limited with 36-year-old Phil Wood , ever-present goalkeeper Steve Anscombe and ex-Hitchin Town midfielder Peter Robinson providing the backbone to the side. Phil played in 53 of City’s 56 games that season and collected the Player of the Season award.

The season contained a few bright spots but, overall, it was close to being a disaster. We finished 21st in the 22-club Isthmian League Division One and were only spared relegation by the merger of Leytonstone with Ilford. After removing Hounslow from the F.A. Cup we bowed out in a replay at Wokingham Town and had midfielder Allan Gallagher sent off. The F.A. Trophy ‘run’ (one game) was terminated in the Preliminary Round at Corby Town.

Our bid for the London Senior Cup faltered at the first hurdle at home to Epsom & Ewell, and Hemel kicked us out of the League Cup in the 1st Round. In the county competitions we removed one of Maurice’s former clubs, Letchworth Garden City, in the Herts Charity Cup before succumbing at home to Ware in the semi-final. Salvation was found in the Herts Senior Cup.

City’s Senior Cup campaign kicked off with a stuttering 2-1 win over South Midlands League side Baldock Town at Bakers Close on 18th November. Baldock led at the interval when a header by Gray looped over Anscombe, hit the crossbar and then struck the City ‘keeper before crossing the line. Robinson, who was City’s stop scorer that season (15 in 44 games), equalised from the penalty spot before the lively Eric Carvill notched the winner.

On 9th December Robinson, with two, and Carvill were also on the scoresheet as City removed Spartan League side Hatfield Town in the 2nd Round with a 4-0 win at Stonecross Road (Hatfield moved from Stonecross in 1980). Paul Mayles , the scorer of our other goal, was in his fourth season with the City and was starting to mature into the player who would become a phenomenal goalscorer during the early 1980s until injury ended his career prematurely.

Hatfield produced a (sparse) programme for the match but used covers leftover from the 1975-76 season. Unfortunately, one of the advertisements was for a hotel in the town that had since burnt down with the owner behind different bars for committing arson.

In the 3rd Round we had our first home draw with another South Midlands League side, Royston Town, visiting Clarence Park on 1st March. Leading the City attack against Royston was the towering figure of Alan Easterbrook who had returned to the club in December after four-and-a-half years away. During the intervening time he had scored freely for Sporting Club in the St Albans Sunday League and also had a spell with Brentford Reserves. Alan scored twice during City’s 4-0 win over The Crows to spark a run of scoring nine goals in six games for the Saints.

Robinson scored the third goal against Royston with Jed Kerr completing the tally. Jed was one of the many players brought in by Walby and, in a better side, had the potential to make a lasting impression on the club. He was a Herts County Youth player and a Boy’s Club international. Two of the goals were teed up by right back Ian Whitehead. Ian, who had a couple of nicknames whilst at the Park – Spooner or Grumpy (the latter given to him by one-time City boss Peter Lawrence) - had made his debut back in May 1975. He left City following the turmoil in the summer of 1978 but returned in the February and the Royston game was his 176th for the club. He later secured the reputation of City’s all-time penalty king when scoring 33 times from the spot during the 1980-81 and 1981-82 seasons.

In the semi-final City looked, on paper, to be out of their depth as Bishop’s Stortford made a visit to Clarence Park on 10th March. The Bishop’s had already defeated City 5-1 and 3-0 in the league but were sent packing by two goals from Easterbrook, one of which was in extra time, and a header from Phil Wood , as St Albans triumphed 3-2. Easterbrook finished the season with a dozen goals in 23 appearances. Walby’s side could even afford the rare luxury of having a Kerr penalty saved against Stortford. After the game the supporters were able to celebrate the win at a disco held in the Clarence Park clubhouse, tickets cost 75p each.

And onto Vicarage Road

The final should have been a complete mismatch as Watford fielded four First teamers in a strong Reserve XI against a City side that had won just seven of its 42 league games and 13 in 55 games in all competitions. The record became 13 wins in 56 games by the end of the night but City gave an excellent account of themselves and led twice before the Hornets recovered to retain the cup that they had won the previous season with victory over Tring Town.

Peter Robinson gave City a first half lead and, after Keith Mercer had equalised, Jed Kerr restored City’s advantage on the hour. The match was turned on its head within the next five minutes when Keith Cassells scored twice within 60-seconds to settle an entertaining encounter in favour of our neighbours. The match was a painful one for central defender Dave Leonard who had to be substituted before half time due to suffering a broken nose.

City supporter Ray Stanton came across a collection of photographs of the match on a film strip. Unfortunately, we are unable to put a name to the photographer but we believe that they were provided for the Evening Echo newspaper. 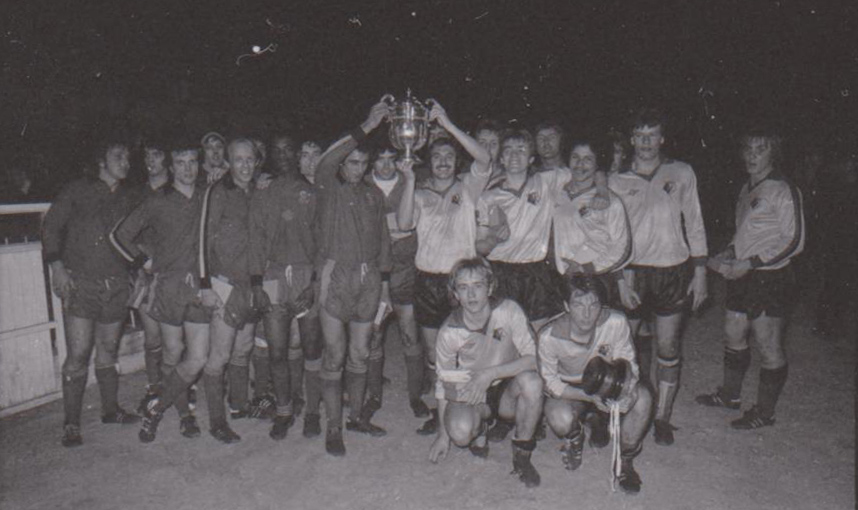 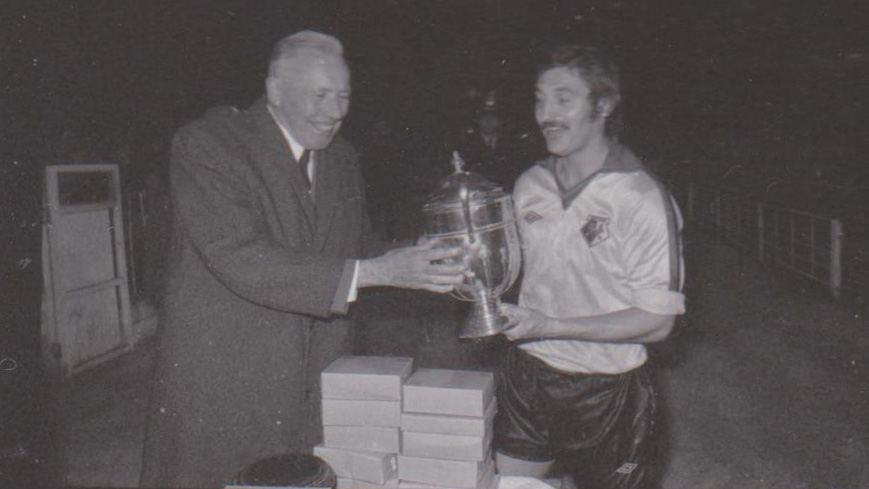 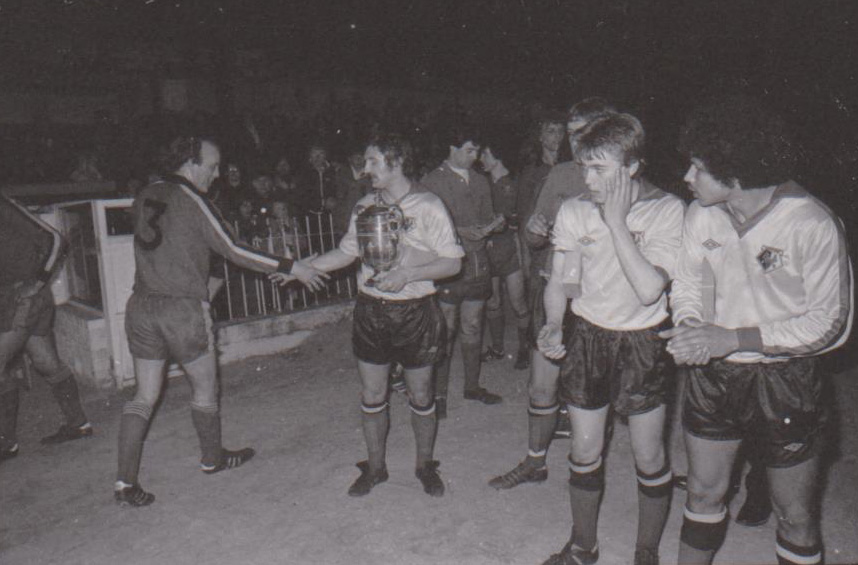 City’s Bill Green walks back after collecting his medal while, to his right, Jed Kerr (centre) looks at his medal. 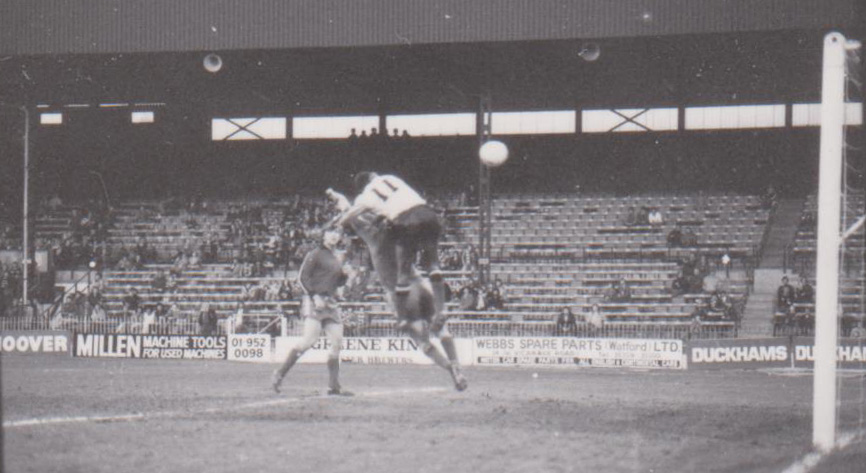 Keith Cassells heads his first of the night to pull the sides level at 2-2. 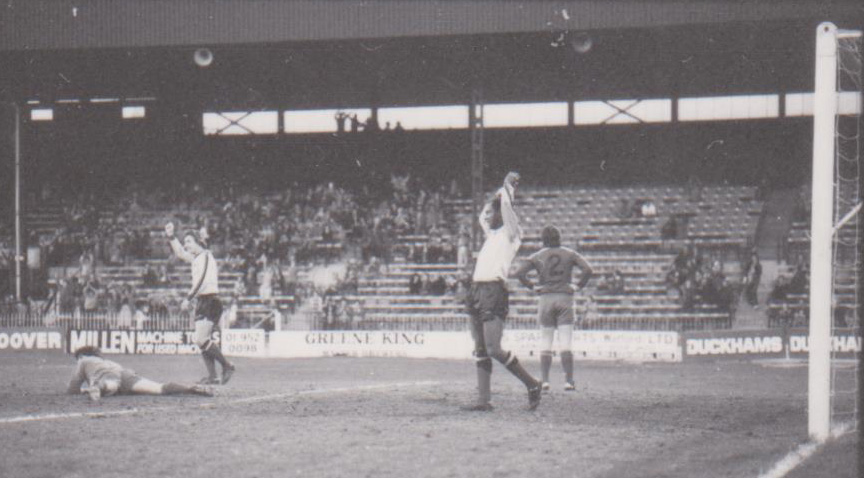 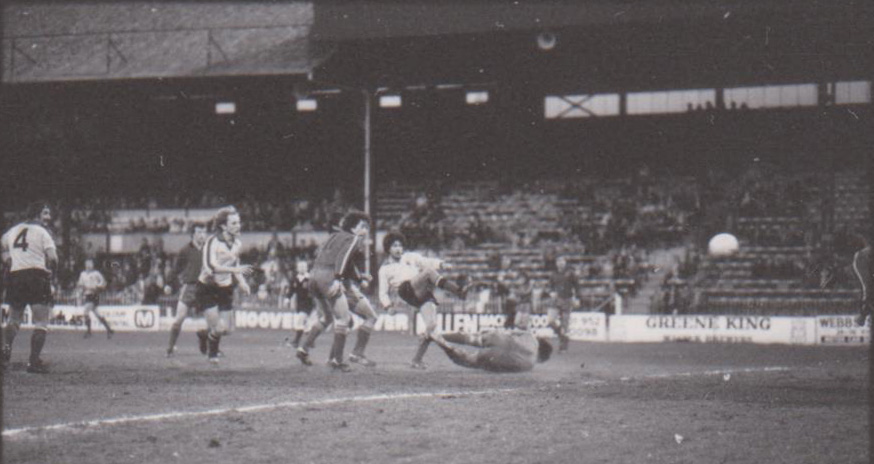 With Mick Moran close by and Steve Anscombe diving at his feet, Steve Emmanuel shoots wide.

We have 253 guests and no members online