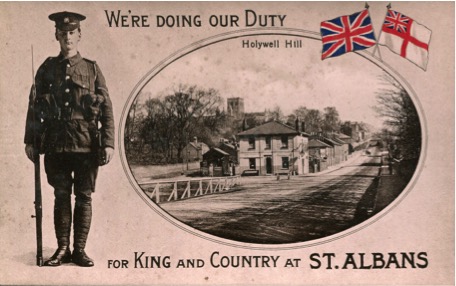 The intention of this publication was, originally, to pay tribute to the nine former players of the Club who lost their lives during the conflicts of 1914-18 and 1939-45.

It could be said that the connection between St Albans City and some of these individuals is tenuous. One appeared in just a solitary friendly, another played only for the Reserve team, one played purely in war-time fixtures, and only three played more than ten games for the Saints.

Yet each is fully deserving of a special, never to be forgotten, place in the history of the Club. They made the ultimate sacrifice for their country, and on the centenary of the commencement of the First World War St Albans City is proud to honour their memory.

The names of the fallen connected to the City club have been known for many years, but supporters will have been aware of little else regarding the Club during the two wars.

Football was suspended during the First World War and the Club was, effectively, mothballed at this time.

However, football was played during the 2ndWorld War and St Albans City competed in a competitive league during every season of it.

Almost every game played has a tale of its own to tell, as military personnel would step in to fill vacant places within the team. Teams would also lend their opposition a player or two if the situation demanded. This was amateur football at its most pure.

Reports from virtually all of these games were collected by Derek Christmas, who was to serve the Club for 50 years as Historian until he passed away in March 2009.

Derek served in South Africa during the 2ndWorld War, and would either have the reports sent to him or stored here awaiting his return.

These matches are not included in the official records of the Club. So, for the first time, a full list of matches played, along with results, line-ups and goalscorers are all brought together and made public.

Details are given of ways in which St Albans City aided the war effort through fund raising and how the facilities at Clarence Park were developed between the two wars.

Also included are accounts of football matches played at Army camps and on the frontline too. There is also a report and photographs of one game featuring a St Albans City player that was played in front of the Monarchy at Stamford Bridge.

In addition to paying tribute to the Fallen of the two wars, mention should also be given to W.J. (William) Green, who passed away 31stJuly 1943. Mr Green was an official of the Club for 28 years and Hon. Secretary from 1923-38. Without the dedication and loyalty of people such as William Green there would not be a St Albans City Football Club. 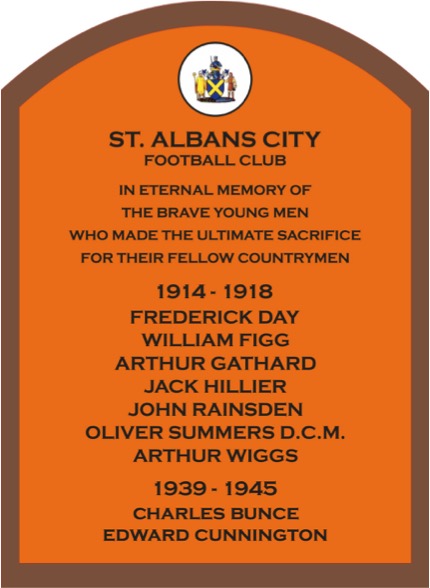 The St Albans War Memorial and memorial garden at St Peter’s Green, St Peter’s Street, was unveiled by the Earl Cavan on 22ndMay 1921.

In commemoration of the seven St Albans City footballers killed during the First World War, a wreath was laid at the St Peter’s Street War Memorial by the then City captain

We have 479 guests and no members online