In Conversation With Mark Kane

‘In Conversation With’ were articles for the matchday programme in the 1998/99 season in which Dave Tavener interviewed various members of the team. Below is the interview with midfielder Mark ‘Kipper’ Kane that appeared in the programme for the Isthmian League match against Carshalton Athletic on 7th November 1998.

A summer signing from Heybridge Swifts, Mark Kane - aka Kipper - is one name on a somewhat brief list of St. Albans City players to have turned out in America for Tampa Bay Rowdies. As we trace Mark's career, he starts off by talking about his time in England prior to attempting to find fame and fortune out in the States.

“Early days I attended the Nightingale School in South Woodford and from school I went as an apprentice to Leyton Orient under Jimmy Bloomfield who tended to rely a lot on his older players. He used to get a lot from West Ham and Tottenham which made it difficult for youngsters to break into the first team. Bloomfield was replaced by Ken Knighton but once he left Frank Clark came in and gave me another year. I was in the first team squad a few times but never played for them. I came out of the pro game - unfortunately it was not my decision to come out - and I didn't play for a while before signing for Walthamstow Avenue. It was frustrating time as I felt that had I been given a chance I could have done quite well.

After leaving Walthamstow I went to Woodford for just a couple of months and then joined Barking with George Borg who was still a player when I first went there. Bobby Arber was manager before George took over and I remember in those days he wanted to take on the world. He manages in a very similar manner to the way he played.” 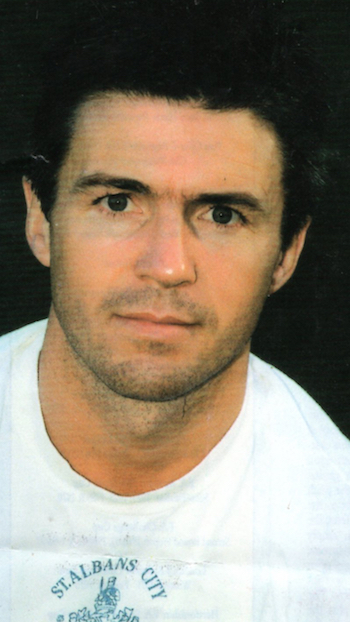 “We went from Barking to Chelmsford City and George took me out to America via a friend of his to play in the original America Soccer League. This was in 1988 and at the time the Americans were trying hard to get the World Cup, which of course they did six years later. To get the World Cup they had to have a professional league of their own, so they set up the ASL which ran all down the east coast from New Jersey, Boston, down to Miami then Florida. I played for the old Tampa Bay Rowdies club for six months, the first season of the league, when Rodney Marsh was the manager. The league didn't really take off but while I was out there the American's were actually awarded the World Cup. Our average gate for a home game was around the 6,000 mark which was in an all-seater stadium capable of holding 75,000, it made it look like we were playing in front of just a few hundred spectators. But it was a good experience, I was playing with ex-pros from different countries like Brazil, South Africa, America and some Europeans. But we never really fitted together as everyone was playing a different style of football. Some of the pitches were astro turf and the teams you played in Florida tended to be full of a lot of Puerto Ricans and Cubans.”

“We came back in the August and went to Barking but joined Chelmsford at the start of the season for the first time, again when George was manager. We had a lot of success there, we knocked Kettering Town out of one of the FA competitions when they had gone ten straight wins in the Conference and were top of the table. George went to Chesham United and I went to Enfield under Peter Taylor. I couldn't believe the number of players with Football League experience, all of them were good players. I went from playing every week at Chelmsford to being part of a squad where there was a lot of competition for places. It can be frustrating to sit on the sidelines and look on when the ball is not being passed around which is how I like to play the game, I think most people would agree they would rather watch a team that plays football rather than one which plays route one, so I do get frustrated watching that kind of football. Garry is often on my case as he feels I sometimes play around too much, he would rather we played in their half of the pitch which is understandable. I have played under Garry for a few years and I understand what he wants and he understands how I play the game.”

“Peter Taylor went to Watford as assistant to Steve Perryman and the club changed a little as Graham Pearce took over. We had a good run and finished second to Woking and played Barnet in the FA Cup, but I think had Peter stayed we would have won the league that year. Our first defeat came at Woking, who at the time had played a few games more than us and were seven or eight points ahead. Woking beat us 5-0 and then Barnet beat us 4-1 and I think from then on Graham's days were numbered and eventually Eddie McCluskey was brought back in which sparked the end of my days at Enfield.”

“Peter Taylor came back out of Watford to take over at Hendon so I moved there and again we started well. Unfortunately, it was still quite early in the season when he got an offer to go to Southend United, which he accepted and the side broke up. Bob Dowie took over and we held our own in midtable and won one of the smaller cups. I had a knee injury which finished me at Hendon but the injury, with the help of Jude Monteath, cleared and I went back to Chelmsford for three years. We were actually relegated whilst I was there and from Chelmsford I moved to Heybridge Swifts with Garry at the start of last season. The pitch at Heybridge suited me as I could pass the ball comfortably on it. We did well in the league in finishing sixth and played Bournemouth in the FA Cup.”

“I have never really been a goalscorer as I have always played in a holding position, although in one season with Chelmsford I got ten goals when playing just behind the front two.”

“Certainly, the standard of the pitches has improved an awful lot. The game has got a lot quicker since I started playing. You look at the Premiership and the standard of football is very good, especially with all the foreign players in there. This has meant a lot of ex-pro's dropping into our level which has to be good for the non-league game. I think that maybe players control of the ball is not as good as it was, say, ten years ago and there are not as many skilful players around as the emphasis tends to be more on the physical side, especially in non-league football. I think most managers are looking more at the result than the football aspect. I found as soon as I dropped out of the professional game that the midfield tends to get bypassed and you have to adapt. I have seen a lot of good players drop out of the game because they couldn't make the change from the pro game into non-league.”

“Peter Taylor, without a doubt. I first came across him as a player at Leyton Orient, he was sidelined with an injury and spent a long time coaching the Reserves playing the kind of game I prefer. For motivation Garry (Hill) is as good as any I've come across but Peter could also go mad at half-time, but even then he would organise things and sort them out for the second half.”

A career in refereeing

“I wouldn't like to be a referee even in non-league football, you are in a position where you cannot win. It seems to be the popular thing for players to all surround the referee at the same time and try to force his hand. I think eventually you will get professional referee's coming in, particularly in the Premier League. I was going to say I accept the referees’ decision but as I've been sent off a few times for dissent perhaps I'd better not!”

Mark Kane left St Albans City at the end of the 1998-99 season after scoring twice in 31 games. The following season saw him team up once more with Garry Hill , this time at Dagenham & Redbridge. Kipper made just five Isthmian League appearances from the bench during his time at Victoria Road and went back to another of his former clubs, Heybridge Swifts, for the 2000-01 season were he scored once in 32 league games.

We have 734 guests and no members online