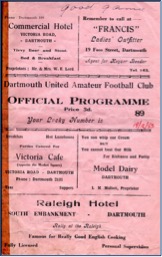 Prior to becoming inaugural members of the Conference South in 2004 the chances of St Albans City visiting far flung places around the country were restricted to good runs in either the FA Cup, the FA Trophy (from 1974-75 when we first entered the competition), or the FA Amateur Cup until the demise of that competition in 1974.

Trips to Devon prior to a move into a national league were particularly rare. The first league match played by the City in that county was in 2006 when we faced Exeter City at St James Park in the Conference National. Twenty-six years earlier we had a fractious FA Cup 2ndRound replay with Torquay United at Plainmoor. But before those two games we had just one other match in Devon, that was on 19thDecember 1953, some 45 years after St Albans City was formed.

The match was an FA Amateur Cup 1stRound tie with Dartmouth United who were members of the Premier Division of the Plymouth & District League. Dartmouth were second in the table at the time of our visit while we sat in seventh place in the Isthmian League.

The travel arrangements were far from ideal and would be considered arduous by today’s standards. The players coach for Dartmouth left St Albans at noon on the Friday, it was followed an hour later by two cars carrying club officials. The players spent Friday night in the Torcross Hotel, completing the seven miles to Dartmouth after lunch on the Saturday. A second night was spent at Torcross before the party returned home the day after the game.

When St Albans City played Southern League games at Bideford during the early part of the 21stcentury, the players stopped for a meal en route. No such expense was considered for the 456-mile round trip in 1953. The following entry was recorded in the St Albans City Minute Book following a meeting at the Conservative Club on 7th December 1953; ‘Meals en route were discussed and it was agreed that sandwiches and a tea urn to be taken on the journey.’ Two days after the game the following was recorded in the Minute Book; ‘It was agreed that a letter of thanks be sent to Mrs Sheppard for the amount of work she had done to provide sandwiches for the Dartmouth trip, which were greatly appreciated by all.’

As for supporters travelling on the Supporters Club coach (organised by Len Sawyer) there was to be no overnight stay in Devon either before or after the game. Quite remarkably, the coach left Clarence Park at midnight on the Friday and returned home immediately after the game. Those supporters not making the trip were encouraged to support the St Albans City FC Christmas Dance at the Town Hall on the Saturday night. Tickets were priced at 2s 6d for club members and 3s for non-members.

As for the game, which kicked off at 2.15pm, St Albans took an early lead through Alan Tompkins and when he added a second goal ten minutes into the second half the result appeared to have been settled. But City had to endure a few anxious moments during the closing stages after the home side pulled a goal back through an Alf Law own goal.

The match attracted a record attendance for Dartmouth of 1,104. The gate receipts were £74 19s, but this meant that St Albans did actually suffer a financial loss on the day. In an attempt to avoid making a loss St Albans, after the draw had been made, did ask Dartmouth if they would forego home advantage but, quite understandably, the request was rejected.

We have 63 guests and no members online