Three-thousand at Clarence Park for WWI visit by Spurs

Tottenham Hotspur have seen some tremendous attendances at their rented home in Wembley during the 2017-18 season and this From the Vault feature travels back to a time when a wartime visit by the Spurs attracted a gate of 3,000 to Clarence Park , and the opposition was not St Albans City.

The game was played during the final weeks of the First World War, on 31st August 1918, with Tottenham facing an XI selected by Corpl. Haydn Price of the Royal Army Medical Corp. The R.A.M.C. were based at Shafford on the Childwickbury Estate, formerly owned by the late Sir John Blundell Maple who had donated Clarence Park to the city in July 1894. Thirty-five-year-old Price had a background in football prior to the calling of the war effort and created history by being called up by Wales whilst a member of the Aston Villa third team. He went on to represent his county five times.

Price’s team was not lacking in football experience with Andy Ducat being his prized asset. In addition to playing for Aston Villa and Fulham, Ducat played 175 times for Woolwich Arsenal and is in an elite band of sportsmen to have represented England at both football and cricket. Lining up alongside Ducat was fellow Midlander William Henry ‘Bullet’ Jones who played 183 times for Birmingham City, having joined the club when they were still known as Small Heath. The team also included two members from Napsbury Hospital, Lieut. Burden and Corpl. Bradbury.

The match was held in benefit of the Napsbury Military and Bricket House (St Albans) V.A.D. (Voluntary Aid Detachment) Hospitals. The large attendance ensured that the day was a great success as a fundraiser.

Tottenham had continued playing throughout the war as members of the London Combination League and seven of the team that played at Clarence Park went on to play for Spurs during the 1918-19 season. One of the four remaining players, Jimmy Brandham, was familiar to the Park having played 91 times for the City prior to the war and a further one game in September 1919. Had Jimmy not come back for that one last game, a 4-3 defeat at home to Wycombe Wanderers in the Spartan League, he would have signed off on the back of ten straight wins with just two goals conceded.

A resident of Markyate, where he was a wheelwright and blacksmith, Brandham also made four appearances for Luton Town during the 1913-14 season and continued to play for the Bedfordshire club during the war. In 1914-15 he featured in 14 London Combination Supplementary Tournament matches and the following season in 36 London Combination fixtures. After the war he played three more games for Luton in the Southern League. Throughout his time with Luton Town and St Albans City Jimmy played as an outfield player, but his guest appearance for Tottenham saw him don the goalkeeper’s jersey. He had faced Tottenham on seven previous occasions during the war. The first away game was played at White Hart Lane but once the military occupied Tottenham’s ground he faced the Spurs at their temporary homes at Highbury and Homerton.

Before the kick-off, which was taken by the Mayor of St Albans, Cllr Arthur Faulkner, the players lined-up for team photographs. The match finished with honours even at 1-1. Tottenham opened the scoring through Corpl. Lindsay but the local medical XI drew level during the second half through Haydn Price, much to the delight of the large crowd. After the game the players were entertained at Bobbies, sadly we have not been able to establish exactly where Bobbies bar was. 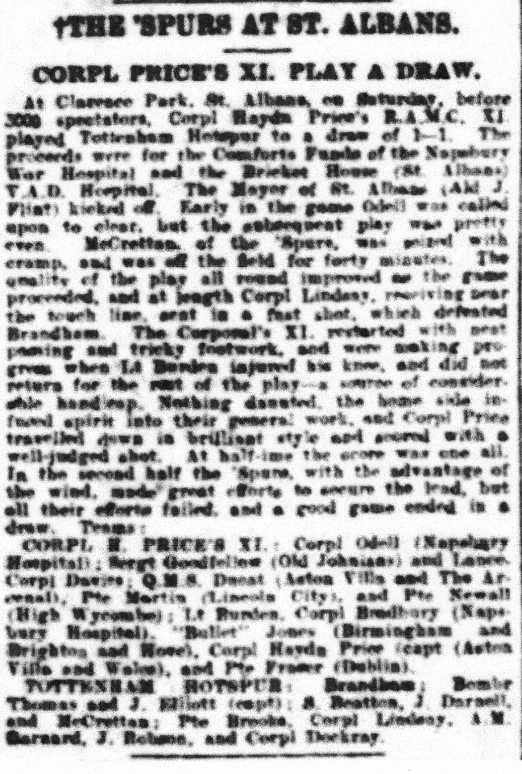 David Gower’s career as an international cricketer with England ended shortly after a Tiger Moth, in which he was a passenger, flew low over the ground during an England match against Queensland in January 1991. But he was far from the first to make his presence felt from above at a sporting event, a plane carried out a similar stunt during the fundraising match at Clarence Park some 72 years earlier. On this occasion the crowd cheered as the pilot dipped a wing in salute to those below.

Although the game was played at Clarence Park it is unlikely that it was staged inside the football ground. Throughout the war the ground had been occupied by the military and the pitch suffered badly. It was not until the start of 1920-21 season that the Football Club could again use the section of the Park set aside for football. For the 1919-20 season our home pitch was a section of the cricket pitch in front of the grand pavilion and this is probably where the Tottenham match was played.

We have 84 guests and no members online