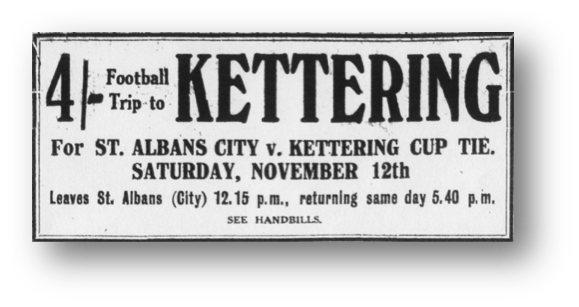 The 1920’s saw St Albans City enjoy a period of unmatched sustained success but it also included City’s heaviest defeat in the FA Cup.There were mitigating circumstances for the heavy defeat and this is the story of 12thNovember 1927 when the Saints visited Rockingham Road to play the Poppies of Kettering Town in the Fourth Round Qualifying of the F.A. Cup.

Below is the report, that appeared in the Kettering-based evening newspaper ‘The Football Telegraph,’who dealt with our demise most sympathetically,

‘Kettering Town, who were excused until the present round, met St Albans City, the champions of the Isthmian League, in the English Cup at Kettering this afternoon. The ground was well filled with spectators early on. The Fuller Mission Band contributed well-rendered selections. After a slight fall of sleet about 2 o’clock, the sun shone out brightly when the game commenced.

The Poppies had their full side in the field, but St Albans included J.Colman at right-half for H.Figg, who was suffering from a damaged knee, G.Wren in goal for A.Ward and P.Pierce for P.Winter on the right-wing.

About 250 spectators made the journey from St Albans by the special excursion. In addition to these there were several charabanc parties from the Cathedral City. The “gate” numbered 4,380 and the takings amounted to £247 18s.

The Poppies won well, all the players displaying fine team spirit. St Albans played throughout with wonderful pluck, despite the heavily growing score against them. There were numerous injuries, but nevertheless there was no spleen or bad feeling.

TOO GOOD FOR THEM

After the game, a well-known St Albans enthusiast expressed his opinion upon the game. “St Albans”, he said, “ran up against a side too good for them in every department, but because of the bad luck caused by injuries they did not put up such a good fight as they had hoped to do. It was hard luck to have to take the field without Ward, Figg and Winter. Their misfortune did not end there for Colman was absent for the first nine minutes’ play and in consequence St Albans were very weak at half-back. Notwithstanding, Minter made many plucky endeavours to get his line going”.

Interviewed after the game Collier, the Poppies captain, said: “St Albans played a plucky and sporting game. They’re a nice lot of fellows and it was downright hard luck that two of the team should be injured early in the game, otherwise such a big score could hardly have been run up.”

Wilfred Minter, the St Albans City captain, said: “St Albans congratulate the Poppies on their success and appreciate it as a good, clean game. They hope the Poppies will have the good fortune to be drawn at home in the next round and then make further progress in the competition. St Albans’ last wish is ‘Good luck to Kettering.’

When the St Albans party returned to Hertfordshire two of the injured players, John Colman and W.Leach, were treated by the Club’s Hon. Surgeon Dr J.W. Cleveland, who inserted stitches to the wounds that both players suffered.

Despite the calamitous day at Kettering, the 1927-28 campaign was a good one for the Saints but it did mark the end of our golden era. The Isthmian League championship was retained, but it was to be our third and final success in that league. The Club had also won the Athenian League on two occasions at the start of the decade. Kettering also had a successful season and, like St Albans, won their league, the Southern League. The Poppies F.A. Cup venture ended in the 2ndRound when Charlton Athletic won a replay at Rockingham Road following a draw at The Valley. 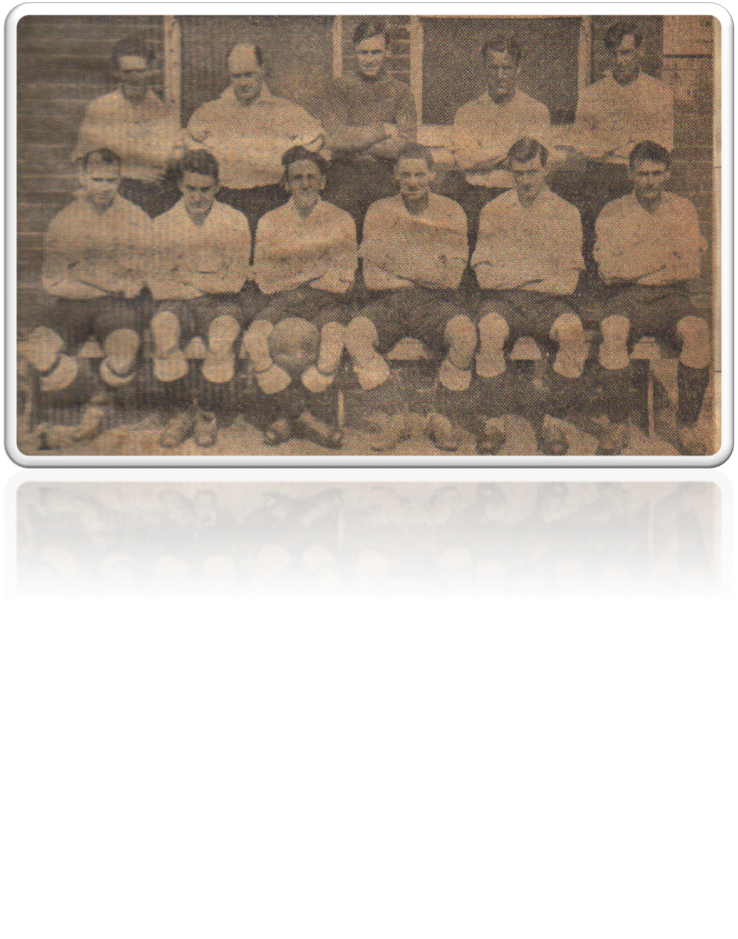 We have 251 guests and no members online