In conversation with Mark Keen 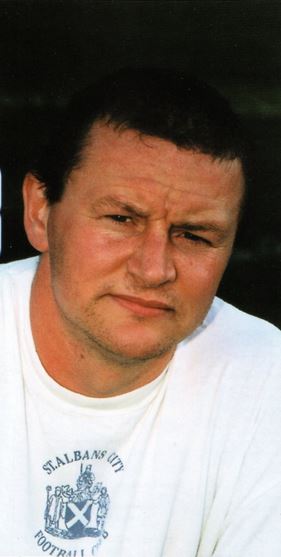 "In Converstation With" were articles for the matchday programme in the 1998/99 season in which Dave Tavener interviewed various members of the team. Below is the interview with Mark Keen

Going up in the world

"I was playing pub football, Saturday and Sunday's, until I was 18 with all my mates. The manager of our Sunday League side went to Witham Town and asked me to join him there. At the time Witham were only an Essex Senior League side so I did not find the step up in standard that big or difficult. I started off in the Reserves but got into the first team towards the end of the season and just stayed in there. At the time I was always playing at the back but halfway through the next season we were short of a forward so I went up front and ended the season as the second top scorer in the league. I prefer playing at the back but you don't always get the recognition you do playing up front. You can play well at the back and it gets noticed but you don't have to play well up front and you can still be the hero if you get the last minute winner. I enjoy playing in attack but I couldn't do a full 90 minutes anymore."

"When I was leaving Witham I was due to sign for Billericay Town but I got a phone call to meet Peter Taylor and Terry Harris who were at Dartford. They had never seen me play but went on what they had been told and I was looking forward to playing under Peter. I signed there and then and we had four good seasons. I'm sure Terry will tell you now that when I first went to Dartford I did notice the step up as even the goalkeepers were fitter than me. Peter really encouraged everyone to play football and even the training was geared up to playing football. When I first met him, Peter looked at me as I was dressed in a T-shirt and loud shorts, I'm sure they wondered what on earth is this. But once they saw me play, they were comfortable and knew that I could play their kind of football. I like to play football although it can be difficult to play your way out of trouble when you are under pressure. I remember when I played in the pub side I would get the ball at the back and sides would just let you run at them and I still enjoy doing it now."

"After Dartford, Peter joined Enfield and rang me to join him there which I did. I stayed at Southbury Road for three years, we were runners-up at the end of the first season. There was a possibility of me joining Watford at one stage when Graham Roberts was the Enfield manager. Enfield at first wanted £30,000 for me then it went to £60,000 after I played a couple of Reserve team games at Watford, but six months later Enfield ended up selling me to Chelmsford City for £4,000. The deal was pretty much sorted out between Watford and myself but once Enfield doubled the asking price that was just about the end of it. I was 28 at the time so I needed to make sure the terms were right for me but once Enfield asked for £60,000 Watford couldn't give me the security I needed. I was looking forward to it at the time and I was disappointed when the move didn't come off but a year down the line I'd forgotten all about it and was just getting on with my career."

"After Enfield I was due to join Hendon, again when Peter Taylor was there, but instead I signed for Chelmsford as it was a bit more local. Ever since I nearly signed I have always appeared in player profiles as having played for Hendon which I never did. It was starting to go wrong at Chelmsford at that time although manager Joe Sullivan got some good players together. We were looking to do well but for some reason it never really happened, we would do well for a few games but then have a bad run. For the first season we finished midtable but the next two years were relegation battles, it was the first time I had ever experienced a struggle. It was desperate at times but that is where I first met Matt Jones and Davey Morrison. At the time Dave looked a good prospect and Peterborough United came in for him. Looking back, it didn't go as well as I'd hoped but as I said it was more local and at the time the kids were growing up and I wanted to spend more time with the family."

"The trip to St. Albans is obviously much further to come but the crew of us who travel up always have a good laugh and really you just want to keep going round the M25 because it is such a laugh. The journey always goes quickly. Garry Hill is very good at pulling together a group of players who, if you look at it from a distance, they probably don't make for a good side, but Garry knows the kind of players he wants and he wants them to play a certain way. He did put together a very good side at Heybridge Swifts who worked so hard for each other and enjoyed being together, and that is why we got the success we did."

"At Dartford I had two FA Trophy semi-finals but reaching the quarter final at Heybridge at that stage of my career was wonderful. We should have beaten Woking, they had one shot at goal and scored from it and even though we got as far as we did, the players were still disappointed we lost that actual game. The first time I got to the last four was my first year at Dartford and it didn't really sink in. I felt that because I was at that level there will be another chance someday and maybe you don't realise how much luck you need depending on who you draw, if luck is not on your side then you will not make it. We lost the first leg at Burton Albion after leading and Peter's final words before the second leg were to keep it tight for 10-15 minutes but within 20 minutes we were 2-0 down and they sat back and defended quite happily. The next semi-final two years later was against Macclesfield Town. The 1st Leg at our place was drawn 0-0 but in the second game we took the lead before going down 4-1. That was the day of the Hillsborough disaster and as soon as I heard that it made you think that there is more to life than football. It puts everything in perspective really."

"I would say that the high points of my career probably came during my days at Dartford. We won a few trophies but it was just so enjoyable playing in such a good side with a good atmosphere, people enjoyed going there playing and training. A lot of that has to go down to Peter Taylor and also to Terry Harris who made the training so good."

Scoring for the Saints

(Against Kingstonian). "It was more pleasing that it got the club a result than for myself personally, I would rather the team won and I didn't play well than the team lose and I play well, it is nice when you get both at the same time but often it doesn't work that way. It was pleasing to score but we did go out in the replay, I would have been much happier with my goal had we gone on to get another and win the game."

Scoring against the Saints

(For Heybridge Swifts). "We were 2-0 down against a strong wind when Garry (Hill) decided to change it and put me up front. We got two goals back quickly and it looked like it might end as a draw then with five minutes to go Mark Kane put a cross over to my head just five yards out and I don't normally miss from there. I think Muddy should have been marking me and a couple of the boys do like to remind him of that!

"I am not sure about going into management. My work at the bank takes up a lot of my time, there is a lot of pressure in it with targets to hit, that is getting harder every year. I would possibly like to try management but whether I am suited for it or not I am not too sure but I certainly have never taken any coaching courses."

The great and the good

"I would not say that there has been one player who has always got the upper hand against me but Steve Clark was always a handful. When he was a bit younger he used to chase you from corner flag to corner flag and you had to be on your toes. He was very dangerous and still is as he keeps proving this season. I have been lucky to play with a lot of very good players like Ashley Vickers whose sheer enthusiasm is magnificent. Ash is improving his disciplinary record; he is learning that you cannot win every ball and sometimes you just have to stand up and not dive in. In my career I have certainly been booked no more than ten times, probably less, so I can honestly say that the rule changes down the years have not really affected my game. As long as you don't go in making silly tackles or diving in then the changes will not affect you."

We have 492 guests and no members online