In conversation with Jimmy Carstairs

‘In Conversation With’ were articles for the matchday programme in the 1998/99 season in which Dave Tavener interviewed various members of the team. Below is the interview with left-back James ‘Jimmy’ Wood Carstairs that appeared in the programme for the FA Trophy quarter-final tie against Boston United on 27th March 1999. 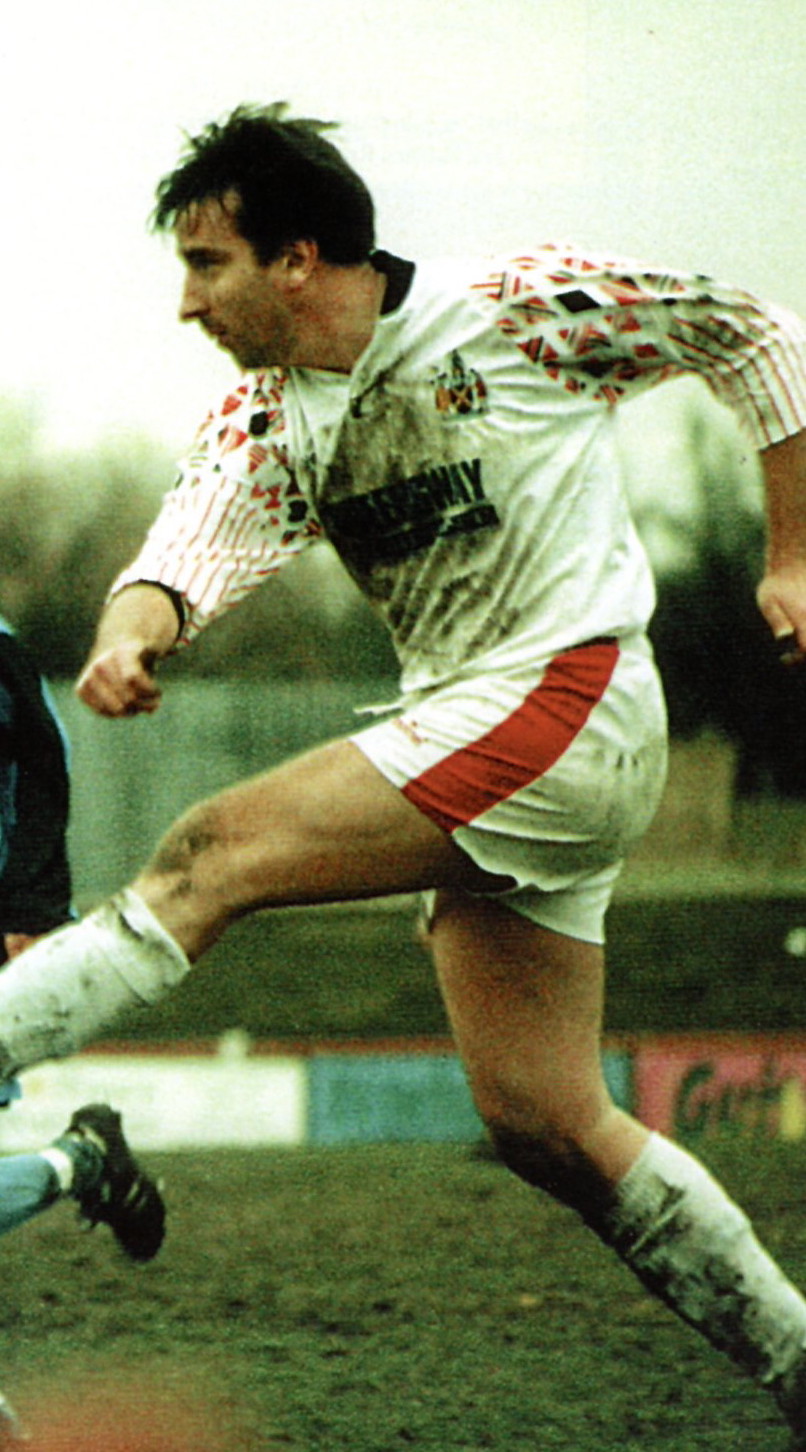 "As a schoolboy I played for West Ham United having been spotted by one of their scouts when I was playing for my Sunday team. I didn't sign anything at this point and when I changed Sunday sides an Arsenal scout saw me and asked whether I would like to go there. I was with them as a schoolboy for a year when they offered me an apprenticeship as a 16 year old. I left school at 16 and did a two year YTS and then signed as a professional for two years which I really enjoyed. We won the FA Youth Cup in 1988 when we had the likes of Andy Cole and Kevin Campbell in our side, I've still got my medal at home. We played Doncaster Rovers in the final, they had beaten Tottenham in the semi final and obviously that would have made for a better game. We won the 1st Leg 5-0 at their place and drew 1-1 at Highbury so won 6-1 on aggregate. Nowadays the final is shown live on Sky whereas in those days it was just highlights on the news and the crowd was something like 4,000 for both games."

"I never really had a chance to break into the first team as they had then the same back four as they have now! I was released by Arsenal when I was 20 and signed for Cambridge United. Financially I was better off at Cambridge than I was at Arsenal but I hated the football. He (John Beck) just wanted you to boot it up the pitch and because of that I nearly gave up the game. From there I went on loan to Stockport County and being there was like a holiday camp compared with Cambridge. I really enjoyed it at Stockport so I signed for them and was at Edgeley Park for three seasons. In my last season there Stockport decided not to renew my contract. So, not being from the north I didn't want to stay up there and it was really difficult getting sorted out with a pro club so I came back home. At that time a friend of mine who had been at Arsenal with me was playing for Enfield so I asked him about what my chances would be with them and that is how I got into non-league football."

"It was very disappointing but I sort of knew it was coming because in the three years I was there we got to Wembley four times and I never played once. One year I was injured and obviously said something which upset the manager, the Uruguayan Danny Bergara. He was very fiery tempered, if he was wrong he was right and obviously what I said to him he didn't like and consequently in that last season I played once and was sub once so I knew that my contract was not going to be renewed. It became a long drawn out process."

"Cambridge had a good FA Cup run just before I joined when they lost to Arsenal. At Stockport we got to the Autoglass final twice and the play-off final. I was involved in all the games up to Wembley but I just never played. I have been in a situation like today's before when I played in the quarter final of the FA Trophy with Enfield. We played Rushden and Diamonds and with eight minutes to go we were 3-1 up but they got level and won in extra time. I guess we did think that maybe we were through to but in football you can never rest on your laurels until the referee blows the final whistle. Today's game is good for the club and is a good experience for the players."

"It was an exceptional side (Enfield's Championship winning side) and it was in the wrong league really. To win it by something like 13 points and not go up was very disappointing and after that the team broke up, if you look around the league now you will find that a majority clubs have two of three players who have been with Enfield at some time. When I stopped playing professionally I didn't do anything for a year during the day work-wise but when I was 25 I went back to college to study for two years, I took a 'B-Tech' in leisure which was the equivalent to two 'A' levels. This worked out quite well for me as I could go to college full-time during the day and then at night-time I could play part-time semi-professional football."

"The season that Enfield won the league we also reached the 3rd Round of the FA Cup, we lost 2-0 at Leicester City who were then, as they are now, in the Premiership. As a professional I had never got to the 3rd Round so it was a good day. You are always going to get nervous especially with all the publicity there is in the papers before the game, it was not like a normal league game, it was a special occasion, so you can get overawed. It happens all so quickly on the day that you don't get to think about it then, it is only later after the game that you can sit around and really think about it. George Borg was our manager at that time, I know a lot of people have got bad experiences with George but I think I was the first player he signed as manager and I never had any problems with him, he was always fair enough with me. I know there are some players at St. Albans now who had bad experiences with him but as I said I never had any problems with him, everyone is different.

"There was a lot of rivalry with any team we played as Enfield were the team to beat and even if we only drew some teams saw it as their result for the season. We had some good games with St. Albans over the years I was there but I wouldn't say that the rivalry between the two clubs was any greater than it was with any other side."

"I left Enfield at the end of last season, I think the chairman cut back on expenses and wanted to bring in a lot of youngsters. They couldn't afford the money I was on and I was getting really busy at work, I'd just started a full-time job as a Sports Development Officer which I'd only been in a few months, and was getting to grips with that so I thought I'd concentrate on that rather than playing football. Then on New Year's Eve Terry Harris phoned me up as St. Albans had a few injury problems and asked me to help out. Obviously I haven't played too regularly but if called upon I will always look to do my best. While I was out of the game I missed the fitness and the banter amongst the lads but I didn't miss the hassle of doing a days work then having to rush to some horrible place on a Tuesday night. In my position now it is a case of biding my time as I have spent a lot of time on the substitutes bench, I would love to be playing every week but it doesn't happen like that. I didn't come to the club expecting to jump straight in, everyone has got to earn their place and if the opportunity comes then I will go in there and try to do my best."

"Personally I would say that winning the league would be the most satisfying. I can't speak for anyone else but obviously a lot of players will never get to play at Wembley in their career so they would pick playing at Wembley. But if you are looking at progression for the club then winning the league is the big thing as it can then get into the Conference."

Fielding a settled side

"I think it is very important, I think you can tinker about with the front line and the midfield but you

have got to have the same settled defence whatever formation or system you wish to play to, injuries and suspensions permitting. During my career I have obviously played within a five man defence but I prefer playing within a four, that is how I have mostly played but obviously the game is changing and it is a case of adapting."

"Ruel Fox when he was at Norwich City with his pace and ability."

"At Arsenal the Youth team manager was Pat Rice and the Reserve team manager was Stewart Houston, all the drills we did under them were designed for the passing game, we were always encouraged to pass the ball about. Going from Arsenal to Cambridge meant going in completely the opposite direction but to be fair to them it worked well for them while they had Dion Dublin, but for me personally I couldn't see any rhyme or reason to it."

"I think times have changed, there is a lot more money in football now as to when I was at Arsenal and obviously transfer fees have escalated, I think even the richer clubs are still looking to bring through the Youth so that they are not having to pay out millions more on new players. I think a lot more players are getting promoted from the Youth ranks than they were, say, ten years ago when obviously the transfer fees weren't as high as they are today. It was possible then to go out and buy a reasonable player for £500,000 as cover if someone got injured. The way I look at players wages now is that if they are offered £20,000 a week then I don't care who it is but no one is going to turn it down, so good luck to them. I think the skillful ones who bring in the crowds can ask for it but now we are finding that some players who are only mediocre are becoming millionaires so how can you motivate them."

A career in management?

"Within my job there are certain aspects of coaching I already do but I don't think I will be looking to go into management. I don't mind coaching juniors but I wouldn't fancy anything more than that."

"My dad, who is Scottish, got a job working in London while my mum was pregnant with me and he didn't want me to be born in England so she had to go back to Scotland and we stayed there until I was eight weeks old. We came down to Chigwell and have lived in the same house ever since."

Jimmy made 11 appearances for St Albans City and left Clarence Park at the end of the 1998-99 season.

We have 937 guests and no members online