In Conversation With Ashley Vickers

"In Converstation With" were articles for the matchday programme in the 1998/99 season in which Dave Tavener interviewed various members of the team. Below is the interview with Ahley Vickers. 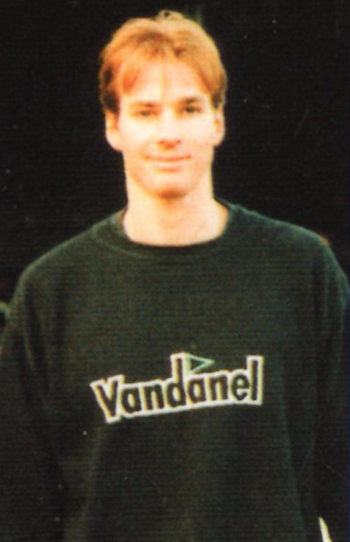 “I come from Sheffield and was with United as a schoolboy, when they turned me down I went to Wednesday. At 17 I waited for the list of retained players, it included Jon Newsome, but I wasn't on it. I was actually quite small at the time and for a while I lost sight of my football until going to University at Worcester and then started playing again, at 20, for Worcester City. They signed me after seeing me play for the University side. At the time my studies were more important than football but once I left Worcester I joined Heybridge Swifts.”

“It was a real blow at the time to find out that I had not been retained by Sheffield Wednesday, it does destroy you. This is where professional football is wrong in that some players throw all their eggs in one basket. I had my teaching to fall back on and went off to University and even though I was given a second chance by Peterborough United I still had something to fall back on. Clubs take on players at 14 then release them at 17, that can't be right as people do not stop developing mentally and physically until they are 21. I do think too many players are missed by clubs releasing them early and not giving them every opportunity to develop.”

“I think the main difference between professional football and the semi-professional game, and it is a very slight one, is fitness. But I would even question that as the semi-pro game is right up there now. Also, the professionals tend to be more incisive and do things a little bit quicker as they have been playing every day since they were 16. When I came to St. Albans last season on loan from Peterborough I loved getting back into the non-league game as it is more physical than the pro game. I love the physical aspect of the game and I think the pro game lacks a little bit of that because it is so quick. This is what I would call proper football.”

“Yes, my disciplinary record isn't the best but by the same token I am 100 per cent committed to the game. I would love to change but my desire to win the ball is so strong that you don't get one without the other. I have to learn to stand up and maybe jockey more but I want to win that ball and the game so much. The two have to go hand-in-hand to a certain extent. I don't want to be suspended as much as I have been previously, as it just kills me to be on the side-lines. I need to be playing and when I'm not I am like a bear with a sore head. It is something that I want to address but I don't want to take the physical aspect and my will to win out of my game.

“At Peterborough we had something like 40 professionals, so not only do some of them not play for the First team but they also miss out on the Reserves. The Reserves train separately so the motivation is not quite there. I think some players do have trouble motivating themselves in such circumstances but it is all about passion. If you are passionate about football as an individual it doesn't matter whether there are 50 or 5,000 people in the ground, if they have paid to watch you, you have to go out there and perform as at the end of the day they are paying your wages.”

Changes to the game

“I love to go in for a tackle but the physical side is being taken out of the game. The art of tackling a player is just as skilful as taking on and beating a player. I think defenders are making a conscious effort not to dive in as before but I do think referees are over-reacting to nondescript challenges. Players will always get caught in challenges for the ball, it is a part of the game, and I cannot abide the thought that the physical aspect is being taken out.”

“During my career I have had one or two seasons when I have scored goals but also there have been others in which I haven't scored. Because I have a little bit of pace I tend to hang back at corners to stop the other side from breaking. That was the situation against Sutton earlier in the week, whenever we had a corner, Sutton would leave Andy Salako up front so I stayed back to cover him because he is quick.”

“I am not saying this just because he is the manager of St. Albans but it has to be Garry Hill , he has such a great desire to win. Garry is a great motivator of players and I'm sure all the lads will tell you the same. You can take good bits from each manager. I think players of a certain standard know when they've messed up but they need telling as long as it is done in a constructive manner. If you give a player constructive criticism that can only improve him but if you come in and destroy a player that can finish him in the game. I have seen people destroy 18 and 19-year-old's and that to me is unforgivable, you have got to build people.”

“We had a tremendous run in the FA Trophy (quarter-final) while I was at Heybridge and it was really the great team spirit that got us through. That was a wonderful occasion so was our FA Cup run when we got through to the 1st Round to play Bournemouth. There is no reason why we cannot do the same here. It is a difficult one, choosing a place in the 3rd Round of the FA Cup or winning the league. There is obviously a lot of glory to be had from the FA Cup but the league is your bread and butter, you have to do well in the league. Really you are paid to do well in the league and as nice as it is to get on Match of the Day the league has to be your biggest goal.”

In awe of City?

“I go along with the line of thought some of the players who have joined the club recently are in awe of it. St. Albans is a much bigger club than Heybridge, for a start it is a cathedral city where as Heybridge is just a small village on the outskirts of Chelmsford. There is a great deal of interest on what goes on down here and if we do well then we will get more people through the gates. All the players here want to do well and that is all there is to it, everyone wants to win.”

“To be honest there is no one, there have been players who have got the better of me in a game but I feel that I've always got even or the better of them the next time I've played them. I used to play against Jimmy Quinn at Peterborough in training and he was a real handful, his finishing was spot on. He would always drift to the far post, jump with his hands up and be a handful, he gives as good as he gets and doesn't mind getting it back.”

Ashley played in both Legs of City’s FA Trophy semi-final tie with Forest Green Rovers in April 1999 and spent most of the 1999-00 season at Clarence Park before teaming up with former City manager Garry Hill at Dagenham & Redbridge in March 2000. His goal against Canvey Island on 20thMarch was his only goal of the season and came in his 91stand final game for the Saints. He scored three goals whilst at Clarence Park and was booked 24 times in addition to being dismissed on three occasions.

He spent six years with the Daggers before following Hill to Weymouth. He later had spells with Eastleigh, Newport County, and Dorchester Town where he was also assistant, caretaker and then permanent manager. In March 2011 he was quite ludicrously sent off when bringing down a streaker after security staff had failed miserably in their attempts to catch the pitch invader.

He left Dorchester the following January and was appointed manager of Blackfield & Langley whom he led to the Wessex League championship. In 2016 he had a brief spell with Andover Town.

We have 700 guests and no members online