In Conversation With Paul Newell

‘In Conversation With’ were articles for the matchday programme during the 1998/99 season in which Dave Tavener interviewed various members of the team. Below is the interview with goalkeeper Paul Newell that appeared in the programme for the Isthmian League match against Hendon on 26th September 1998.

Occupation: Electrician, also training to be a Driving Instructor.

Starting the season as the Saints new man between the sticks is 29-year-old Paul Newell who had a short loan spell with the club back in January. ‘Tubbsy,’ as he is affectionately known, is under no illusion of the size of the task facing him this afternoon as we look to end Hendon sequence of successive victories at our expense. Although not in goal for City during Hendon's recent 4-1 win at Clarence Park , there were a few players in the Dons line-up who caught his eye that night.

“I try not to think about who scores against me, if someone scores then he scores. But from what I have seen so far I like the looks of Hendon's Paul Whitmarsh, he is quite lively and looked good when we last met. Apart from him our defence has done well so far this season - last week-end excepted - and not too many players have caused us problems. Maybe after just eight games though it is a bit early for me to make a judgement.” 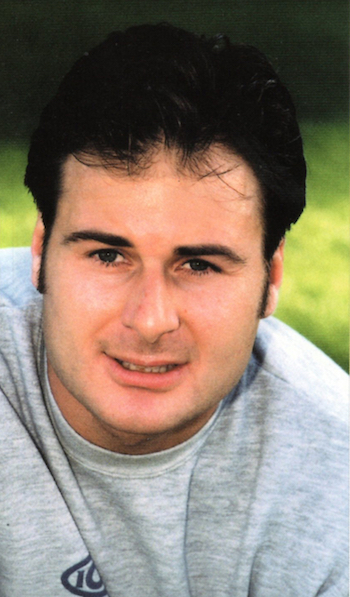 How it all started

“I was at Tottenham as a kid before signing as an apprentice at Southend United when Bobby Moore was manager, I stayed there for about four years making my debut at 18. It was actually Paul Clark who gave me my chance at Southend, though I also played under Dave Webb. In all I played about 20 games for Southend before joining Leyton Orient where I did well and played around 70 games. From there I went to Barnet but it did not really work out at Underhill. I played about 28 games but was mostly in the Reserves and then got a phone call asking whether I wanted to go on loan to Darlington. I thought, ‘where on earth is that?’, but it was First team football. We had a good side that season and could have won automatic promotion had we not only drawn on the last day of the season, that meant going into the play-offs. We were beaten 1-0 in the final by Plymouth Argyle in front of more than 43,000 fans. You dream of playing at Wembley as a kid and when I joined Darlington I thought I had no chance of playing there. Fortunately, we did have a good side and I remember a few mates went to Wembley and we had a good day, it was just a shame about the result. It is something you don't forget. I stayed with Darlington for another year but my wife was still down here and it just was not working so I sort of jacked it in and decided to play part-time.”

“Looking back I don't really think Ray Clemence (Barnet manager and former England goalkeeper) was as much help as he could have been, he took us for training every now and then but I think someone like that should have taken us more. It was the same when I went to Darlington and played under Jim Platt, the former Northern Ireland goalkeeper. Everyone has their own methods but I felt they both could have done more to help their 'keepers. At Orient I worked with Chris Turner who, as far as I am concerned with regard to training, was the best. We had a goalkeeping coach at Orient, Alex Welsh who used to be at Arsenal, and he was good. I think you do need a specialist goalkeeping coach at a club. I played a couple of games for Sittingbourne last season then got a call to go to Colchester United. Also, of course, had a few games at St. Albans but ended last season with three months at Northampton Town. I want to enjoy my football and if you are not in the First team then you don't enjoy it, you don't feel a part of it. In Reserve team football there is no pressure, you can have five bad games on the trot but if that club only has two 'keepers then you know that you are not going to get left out. It is nice to come to St. Albans and although it is relaxed there is a bit more pressure, it is more competitive and I enjoy it. I am now looking forward to a good couple of seasons here.”

“Can't remember the last time I saved a penalty. I have tried to work them out over the years, tried to guess where they are going but I usually go the wrong way. Now I try to stand up as long as possible, if you go down too early then the kicker can just put it in the opposite corner. The kicker is always favourite to score but if the 'keeper saves it he is the hero. I think the fact that we can now move along our line only confuses it, a lot of 'keepers still prefer to stand still and look as big as possible. I still don't think we punch the ball as much as continental 'keeper's, English goalkeepers don't tend to be as eccentric as the overseas ones. We are coached to catch the ball but obviously there are times when you are under pressure and have to punch it away. Continentals even seem to punch out shots but I still believe that we are the best.”

“When I was at Darlington I remember we drew with Leeds United at Elland Road. You look around stadiums like that and think you could handle playing here every week. You want to give it your best shot at a place like that and as I said we did have a good side that season and managed to get a draw. The non-league game is getting better every year and I do not think there is a great difference between the Third Division and this league. Obviously, their fitness may be better, as they train full-time, but the FA Cup has proven that clubs at our level can beat Nationwide League sides. One of the reasons why the non-league game is getting better is that the influx of overseas players means more youngsters drop out of the pro game and join non-league clubs.”

Wrap them up in cotton wool?

“Too much protection for goalkeepers? Of course not. It only takes a slight knock to put you off balance, I am all in favour for as much protection as possible (wimp - ed). I have seen 'keeper's push other players and if it happens in the area then it has to be a penalty but referees don't seem to give them for little pushes from corners. When you go for the ball you are concentrating on getting the ball and don't always notice when someone comes in to give you a clout. It is hard for a 'keeper to get to the ball when there are a lot of bodies in the area. Corners and other set-pieces are so vital to teams now as we saw last week with all three Chesham goals coming from set-pieces. Bruce Grobbelaar was probably the best I've seen at coming out to get the ball, ok he dropped a few but he did also catch a lot. With the way the game has progressed goalkeepers do now need to be bit of an outfield player. The game has speeded up and you have to try to kick with both feet. It always takes a couple of games to settle every time there is a law change but you do get used to it.”

“There have been too many good saves to remember (said with a sardonic smile). Bloopers, I've had a few of them. The one other week against Basingstoke doesn't count as the ball hit a bobble. Probably the worst one happened when I was playing in a Reserve game at Southend. I went to throw the ball out, stopped halfway through, the ball slipped out of my hand so I went out charging after it and then got chipped from about 35 yards. I think part of being a goalkeeper is to have the character to bounce back, I've seen 'keeper's go to pot once the crowd have got onto them but you have to accept that you've made a mistake, put it to the back of your mind and just get on with the game.”

Paul Newell left St Albans City at the end of the 1998-99 season having kept 13 clean sheets in 47 appearances. He had the misfortune to be the first City player to be dismissed three times during the same season. After leaving the Park he went with Garry Hill to Dagenham & Redbridge where he played in 41 of the Daggers Isthmian League Premier Division games on their way to winning the title by a country mile. The 2000-01 season saw Tubsy on the road as he had spells with Billericay Town, Sutton United, Hendon and Grays Athletic. He later had spells with Canvey Islands, where he was also goalkeeper coach, and Aveley and Ford United.

We have 195 guests and no members online