In Conversation With John Pollard

‘In Conversation With’ were articles for the matchday programme during the 1998/99 season in which Dave Tavener interviewed various members of the team. Below is the interview with a man for all positions, John Pollard, that appeared in the programme for the Isthmian League match against Aylesbury United on 5thDecember 1998.

Home Life: Married to Rachel, they have a son named Joshua who will be one month old on Wednesday.

This coming Wednesday, John Pollard takes a break, of sorts, from Isthmian League action as he lines up in the League’s Representative squad for the annual fixture against a Football Association XI. We wish Polly well for that match while today we trace the path that his career has taken thus far.

"I was on Colchester United's books from the age of about 12 and later became an apprentice, then at the age of 18 I turned pro. I made my debut for them in the Football League but two years later we were relegated to the Conference. I was released when I was about 21, I knew it was on the cards, as I had a history of back trouble and maybe had a loss of form at the time.

It is a blow for any full time footballer because you don't realise what it is like until you have to come out to work and it is bit of an eye opener. But it is a blow which we knew was going to happen as obviously things weren't too good at Colchester, we were down in the Conference and there was a lack of money so they had to cut back. I would say that at the time the Conference and Division Three were of a very similar standard, there was not much difference at all. While I was there I went out on loan to Fisher Athletic mainly to gain experience and later had a spell on loan to Bury Town before making the move permanent. Probably the biggest difference between the professionals and non-league football is that the pros do full time training, so are that bit sharper.” 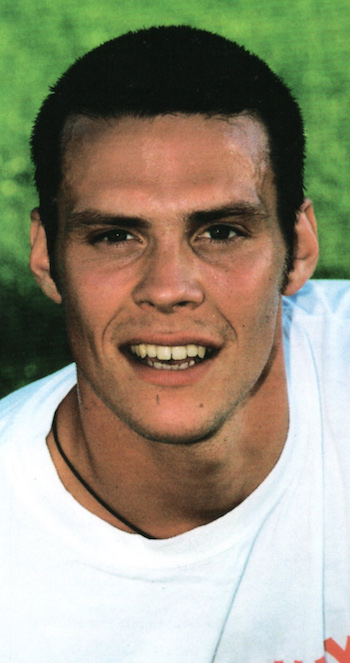 The road to St. Albans City

“Things were not working out at Bury, I found it a long way to travel and I got in at Heybridge Swifts through a friend I had there but within a month the manager had been sacked. Garry Hill took over and I spent the next six seasons playing under him and enjoying a lot of success. We won promotion, got through to the 1st Round of the FA Cup, had good runs in the FA Trophy and other competitions like the East Anglian Cup. There was not really a lot of ambition at Heybridge until Garry went there, I think that the manager who was there before him was just content to stay in Division One. Following Garry to St. Albans was not as easy a decision as one may think. My wife was due to have our first baby and it is a fair way from Tiptree, where we live, to St. Albans. I had a few clubs who asked me to join them once Garry left Heybridge, but I wouldn't have gone anywhere else and once I heard that some of the other players were coming here then it made it easier for me to say yes.”

“I don't really score that many goals, as you'll find out in time, so it was lovely to score our first home goal of this season. I've scored once more since then and both have come from my head, you will not see me score many with my lower anatomy, but most of my goals will probably come from set-pieces. I would say that the goal I scored for Colchester on my debut was probably the second best thing to happen in my life after the birth of our son. It was fantastic, it was the season before we went down and again it was a relegation battle. There were only about five games to go and we needed to win. We were two-up but Exeter City were coming back strongly. I came on for maybe the last 15 minutes and with virtually my first touch I banged it into the bottom corner from about 25 yards, which I can assure you is a very unusual experience for me. The crowd was about six thousand, the biggest I had played in front of and it was certainly a moment to savour.

I scored against St. Albans last season and I think the 'keeper had bit of a nightmare. We were already two up when a cross came in, the `keeper had bit of a fumble then the ball bounced off my chest, thigh and knee before bouncing in off my foot. It wasn't one of my best goals but it counts all the same.”

"I suppose I am what they call a versatile player. Even in the Football League I played at right of midfield, centre midfield and centre half, and under Garry Hill I have also played in various different positions. At the end of the day you just want to play and are quite happy as long as you are pulling on a shirt. I wouldn't say I've got a favourite position, it all depends on how I am playing at the time, if I'm playing well then I'll say that position! But I suppose if I think about it then I would say centre half as you only have to look one way" - (laughs mischievously as if expecting a going over from Messrs Keen and co.).

I found it quite a change last Saturday at Dagenham & Redbridge when I switched to midfield after playing the previous four or five games at centre half. I found that it was not so much a case of adapting my tackling but more of getting my engine right. It was a tough game and you have to get your breathing right for going up and down the pitch. It will be easier if I go back to centre half again for, as I said before, there you only have to look one way but in midfield you have to have good vision and that is where people like Matt Jones, Paul Turner and Lenny Piper make it look easy.”

“I am a player who thrives on adrenalin and being up for each game, so I have never really been affected too much by the crowd. When I was at Heybridge we were playing in front of crowds around the 200 mark and on some days it could down to around 100, so now to be at a club to have such good support as we do at St. Albans is absolutely fabulous. It is a pleasure to play with such excellent support behind us.”

“I have always been told that you will never dominate for a whole game and there will be parts of matches when you are not on top. There have been games where we have let in bad goals, like against Slough Town and Chesham United who are not great sides but we made individual errors. Last Saturday, though, we were playing against a good side with good financial backing. Yes, it was disappointing to concede two goals once we had got ourselves into a winning position but Dagenham & Redbridge are a good side. I think it is a very strong league this season with five or six particularly good sides.”

“I am not very good at remembering the names of players I have played against but I remember that Sutton had one guy in the middle of the park who caused us problems. I remember teams more rather than individuals but Matt Jones is certainly one with whom it is very difficult to play!”

“Although I have played in a few relatively minor cup finals I would say that playing in the 1st Round of the FA Cup has been my greatest honour within the game. I missed out on playing in the Quarter Final of the FA Trophy with Heybridge because of a bad calf injury but I did play in the 3-0 win over Kidderminster Harriers. To miss out on the quarter final was very disappointing especially as the lads played so well on the day and could have won. My ambitions in football are to win the league title and then get to Wembley in the FA Trophy. I believe you always have to think of playing at the highest possible level, so I would love to get back to playing in the Conference.”

“My disciplinary record has got better down the years, going into today's game I've only had one booking this season. My record was pretty grim to start with as I did get sent off a lot, but I have been a lot tamer over the past three years or so. As you grow older and gain more experience, you do learn to stay on your feet and not dive in. Also, you learn from the older guys who have been around the non-league game for a while.”

John Pollard spent two seasons at Clarence Park before leaving at the end of the 1999-00 season, by which time he had scored four goals in 93 games. During his time at the Park he played in the FA Trophy semi final against Forest Green Rovers and was in the side that defeated Baldock Town in the final of the Herts Senior Cup. After leaving us Polly returned to Heybridge Swifts where, with 543 appearances, he became the all-time leading appearance maker at Scraley Road.

We have 702 guests and no members online