In Conversation With Terry Harris

‘In Conversation With’ were articles for the matchday programme during the 1998/99 season in which Dave Tavener interviewed various members of the team. Below is the interview with the City Assistant Manager Terry Harris that appeared in the programme for the Isthmian League game against Harrow Borough on 19th December 1998.

Today's feature takes us into the Clarence Park boot room to catch up with Terry Harris who has experienced most of the high points a non-league player can enjoy. From Isthmian League championships to scoring at Wembley (FA Trophy final 1977) and travelling to the Far East with the Middlesex Wanderers, the Saints assistant manager has achieved the lot and this after-noon he talks us through his very successful and fascinating career. 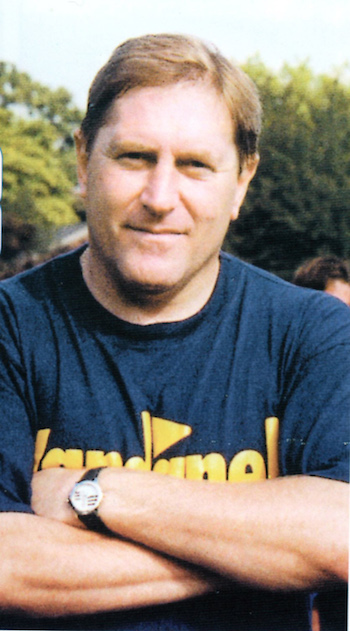 A ‘Korea’ in Football

“I started at Dagenham playing for the Reserves at 16 and moved up to the First team when I was 19. Some of the quality players they had then were the likes of Kenny Gray, an England Amateur International, Neville Fox and Dennis Moore. After leaving Dagenham I played at Sutton United under the infamous Barry Williams who was actually the number two there with Keith Blunt the manager. I was fortunate enough to play in the Anglo-Italian Cup Final while I was at Sutton. We beat Cremenese 2-1 out in Italy in front of something like ten to twelve thousand people. It was very intimidating not only from the crowd but also from the players as well. They start them off early out there in learning blocking manoeuvres, pulling shirts and that, but it was great fun. I played up front with the great John Butterfield who is obviously well known at St. Albans. We played matches home and away on our way to the final, it was a tremendous eye-opener and it is a shame that the competition can't be brought back today.

I was also fortunate enough to be selected for the Middlesex Wanderers on a tour of Malaysia and Singapore and I also played in what they called the Presidents World Cup out in Korea. It was like a mini World Cup for the up and coming nations and although we didn't progress beyond the Group stage it was very enjoyable, as we played in front of gates of over 40,000. When you are selected for the Wanderers you are like an ambassador, that is what they are all about, it is to represent your country abroad and promote the good name of football.”

“1 didn't have a particularly good goalscoring record compared to some of the great players who were around at the time. Sometimes you need somebody who can make the goals and I was the one who did all the work for the likes of Neville Fox, of Dagenham, to score all the goals.”

Time to back down

“I actually got a back problem and finished playing when I was only 28, maybe if we had got in those days the kind of physiotherapists we've got around nowadays it may have prolonged my career. But before I finished I moved around a bit and played for a while at Enfield under Ted Hardy. We won the Isthmian League by drawing on the last day of the season, 3-3 with Walthamstow Avenue but I went downhill after that due to the problems with my back. I joined Chelmsford City but then decided it was time to pack up and go into coaching.”

“My manager at Dagenham was Laurie Wilkinson, he was experienced and successful. After leaving Sutton, Keith Blunt went to Malmo to work under Bobby Houghton and, as I said, at Enfield the manager was Ted Hardy. After taking my coaching badge I had a spell at Tilbury. Working there on a cold December night is a real eye-opener. I learnt a lot of good things along the way but you look to pick up bits from each of the managers you work with. My good friend is Peter Taylor and when he got the Dartford job I joined him as his number two, I stayed with him for nine years. I enjoy the coaching side and don't want to become a manager but when Peter went back into the pro game I was left without a number one. He got me to do some scouting for the England Under-21 squad but after that I went back to Enfield under George Borg for three years and again we were successful.

When I left there, Bob Makin invited me along to do some coaching at Boreham Wood but it was a pretty casual association. I didn't really enjoy doing the scouting as I do not like just going to watch certain players, I missed the day to day contact with the players and the banter whether it be on the pitch or the training ground. There was no real buzz in getting up on a Saturday morning and thinking that today I'll go and watch so and so playing for Ipswich or whoever. I came to St. Albans when Jimmy Neighbour was manager and was looking for a number two.”

“Winning is a habit, a very good habit, which creates a good atmosphere within the dressing room. I must say that that has been the case here at St. Albans near enough since day one when Garry arrived because the guys he has brought in are excellent both on and off the pitch. If you have that good atmosphere amongst the players then it really does auger well for the future. Some of the successful sides I've played for and against in the past have been able to shut up shop at one-nil up and I can see some of those qualities here, especially on Saturday at Basingstoke Town where we had to battle back to win in difficult conditions from a goal down. Sides that win championships go away from home and come back 1-0 or 2-1 winners, that is the sign of a good side.”

“From a personal viewpoint, as much satisfaction as you get from winning the league a Wembley cup final appearance gives you your greatest day. We (Dagenham) were fortunate to some extent in the semi-final of the FA Trophy as the other sides were Altrincham, Scarborough and Slough Town. We drew Slough and beat them 3-0 at home in the 1st Leg and that second week was the longest week of my life with everybody saying you are at Wembley. Then in the 2nd Leg we were two down in 14 minutes and suddenly it's 3-2 on aggregate, but we got one back before half time and went on to win 6-2 over the two games. It was not complacency which allowed Slough to get back at us it was simply that they had nothing to lose and bombarded us.”

As for the final we were 1-0 up with two minutes to go against Scarborough but lost 2-1. Yes, I scored the goal that put us ahead. It was 12 minutes past three on the 14 May 1977, you don't forget these things and I can tell you everything about it starting with what I had for breakfast. There was a guy called Frankie Saul (played for Tottenham in the 1967 FA Cup Final win over Chelsea), he played the ball out wide to Mal Harkins who just knocked it past the full back and whipped a cross in. I don't know whether I fell over my shoe laces but I dived pretty much like Keith Houchen did when he scored that goal for Coventry City in the Cup Final against Spurs. I was probably off the ground a little bit longer than he was before I headed it home and I've still got photos of it and a big picture of the moment. But to lose the game to two goals in the final minutes was a killer, we thought we had it won. Scarborough were a top side at the time and full credit to them. The game seemed to turn their way when Barmby, Nick's dad, came on as substitute.

I remember we were fortunate in the round we came in, the 3rd Qualifying Round at Leatherhead. We were a goal down with 92 minutes on the clock when we scored an equaliser and then beat them at Dagenham in the replay. At that time Leatherhead had John Swannell in goal and the `Leatherhead Lip' Chris Kelly up front. In the Quarter Final I was brought down for the penalty which put us through to the semis.”

“We have done a lot of work on set-pieces and the shape of the team at St. Albans and I think it is beginning to come to fruition now Sometimes the throw-in and free kick routines you work on come off and it looks good but there are times of course when they don't come off and look dreadful. It is frustrating when they things don't come off but once the players cross that white line we have got no control. Probably the best footballing side I have been involved with was Dartford, Peter Taylor was playing at the time and they played some great football.”

“As far as I am concerned, playing is the only thing in football and coaching is not a perfect substitute for it. I am a frustrated player; I did not have the goalscoring prowess of Steve Clark - my main forte was that I could hold the ball up - and I get frustrated now when we give the ball away cheaply. It is quite simple but if we have the ball then the other team cannot score. One thing I haven't done in my career is be involved in the Conference and that is my one aim. I would like to coach in the Conference, preferably with Garry to be honest, because I think he has done an excellent job since coming here.”

Best advice received and given

“Keep playing at the highest standard possible as you can for as long as you can and look after yourself and your body.”

The immensely likeable Terry Harris followed Garry Hill to Dagenham & Redbridge at the end of the season and went on to enjoy a highly successful career as a coach. The duo led Dagenham into the Conference and Football League and, as No.2 to John Still, he also guided Luton Town back into the Football League. Terry has also had a spell of working with Boreham Wood but as of 2020 was back at Dagenham & Redbridge as joint-assistant manager at Victoria Road.

We have 731 guests and no members online