This From the Vault feature takes a look at different sports that have been played on the football pitch at Clarence Park since it opened in July 1894.

When the Park opened sections of it were dedicated to five sports; football, cricket, tennis, running and a cycling track. Sir John Blundell Maple, who donated the park to the citizens, was a successful horse breeder and race owner but also had a passion for cricket and intended that the Park would become the county cricket ground. For once in his life Sir John did not back a winner but cricket does continue to be played here, albeit at a lower level than he had desired. The cycling and running tracks ran around the outside of the cricket ground with the tennis beyond there and furthest from the pavilion.

The football ground, then home to the original St Albans Football Club, was where it still is today but was not home purely to football. Back in 1890s the close season was a lot longer than it is today and rather than have a large area of the park not contributing income the council hired it out for the use of tennis. Whether this was the case from the first summer that the Park was open is not known but pretty soon the council had a dozen courts dotted all over the football pitch.

This situation continued until the Football Club complained about the damage being done to the playing surface in March 1921. At a meeting of the council’s Clarence Park Sub-Committee on 20thApril it was agreed to reduce the number of courts to eight, as this ‘will leave a large portion of the centre of the ground free for rest.’ Exactly when tennis ceased to be played on the football pitch has not been established but it is thought to have died out by the end of the 1920s. 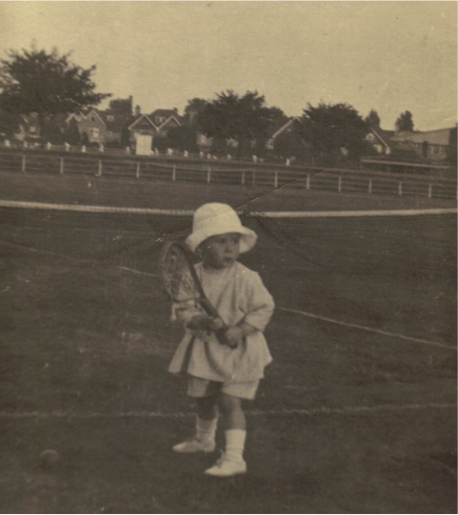 Above: Lifelong City supporter Peter Hollingsworth is kitted out for a game of tennis on the football pitch in the mid-1920s.

St Albans City Football Club was formed in April 1908 but during the season prior to our birth, 1907-08, a rugby club, Herts Wanderers played a known four games on the football pitch. Attendances were said to have been between 200-400 at each game and it is questionable as to whether any matches should have gone ahead at all, as the football ground was not long enough to stage rugby matches.

Rugby returned to the football ground in March 1935 when a match between Durham County and an International XV attracted a gate of close on 3,000, which was fewer than had been anticipated with receipts in the region of £250. The match was staged in aid of the Durham Miners Appeal Fund.

Four years later World War II was declared. Football continued to be played at the Park throughout the war but on 21stSeptember 1940 a boxing ring was erected in the centre of the pitch and bouts were held between The Army and R.A.F. Henlow in aid of the Spitfire Fund.

On 29thJuly 1944 another boxing tournament was staged for the benefit of the St Albans and Mid Herts Hospital. Unfortunately, the main bout between Billy Hawkins and Johnny MacDonald did not take place but around £50 was raised for the hospital fund. 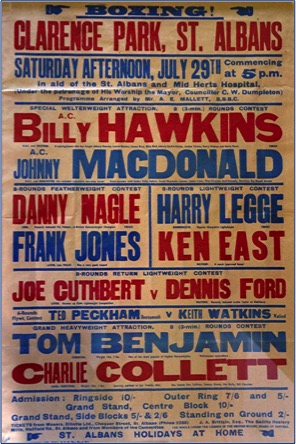 Poster publicising the 1944 boxing tournament on the football pitch.

We have 89 guests and no members online