During the BBC’s live coverage of our FA Cup tie on 14th October 2017 those behind the microphone made a big deal of something that has not been inside the football ground at Clarence Park for over 19 years; an oak tree. 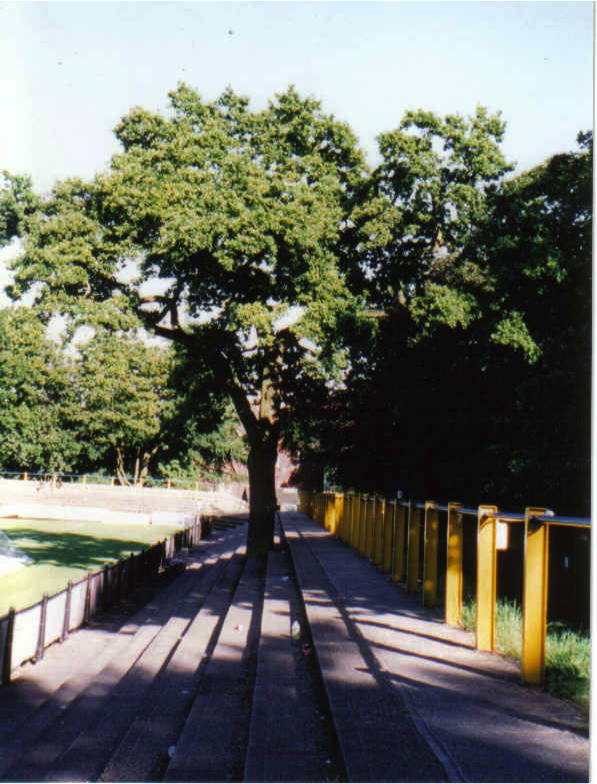 The fact that Conor McNamara and co. made such an issue of a tree that was felled in August 1998 irritated City supporters from St Albans to Sydney and many places in between. But now that a few twigs have been ruffled we’ll take a look at one of the most famous lumps of wood in British sport.

Clarence Park was given to the citizens of St Albans by Sir John Blundell Maple and opened on a wet 23rd July 1894. Why the ground for the football pitch was not levelled and a tree behind the goal at the southern end of the pitch not removed is not known, but they were to become two landmarks for which the football club was to become very well known. With the City club not formed until 1908 the first team to rent the playing area from the council was the original St Albans Football Club (1881-1904), and the tree, believed to be around 40 years old at this time, was mentioned in the match report for the very first game played at the Park.

St Albans faced London side Clarence in that match, a friendly played on 22nd September 1894, and during the game it was reported that ‘Hargroves (Clarence) put into the centre of the tree.’ The match finished 1-1 and the tree, save for Hargroves’ shot, survived relatively unscathed.

At the time of the park opening the football ground did not have any terracing or a main stand. A small stand, stretching for 104 feet, was soon erected as concern grew for the ladies having to stand in the rain in early autumn. The terracing, then in the form of railway sleepers, did not arrive until 1921, and again the tree avoided being felled with the sleepers placed in front, to the back and the sides of it.

By this time the tree was already becoming a feared weapon in the armoury of the football club, as young boys found the urge to throw acorns at opposition players, particularly goalkeepers, too strong to resist. Down the years a number of visiting players complained about being bombarded from the terraces and those on the receiving end were not just goalkeepers whose antics would have been better served as a member of a travelling circus.

On 24th September 1949 Leytonstone, on the path to their fifth Isthmian League title, went down 3-2 with the England Amateur international goalkeeper Doug Jarvis informing referee A.S. Holmes of Pinner that he had been pelted by acorns. Mr Holmes reported the incident to the Football Association and the club was ordered to place warning notices around the ground. A succession of home games during the 1966-67 season saw acorns and toilet rolls thrown into the Hatfield Road penalty area before the club clamped down on the mischief.

The incident against Leytonstone received the attention of the national press, as did a similar occurrence on 3rd October 1987 when Bromley goalkeeper Nicky Sullivan came under fire during the Kent club’s 2-0 FA Trophy win here. City supporters had something of a love-hate relationship with Sullivan but the throwing of acorns was as close as it came to becoming unsavoury. On this occasion the referee did not report the club but The Guardian picked up on the story and ran with a piece that opened with the words; ‘Trouble at normally sleepy, leafy Clarence Park.’ 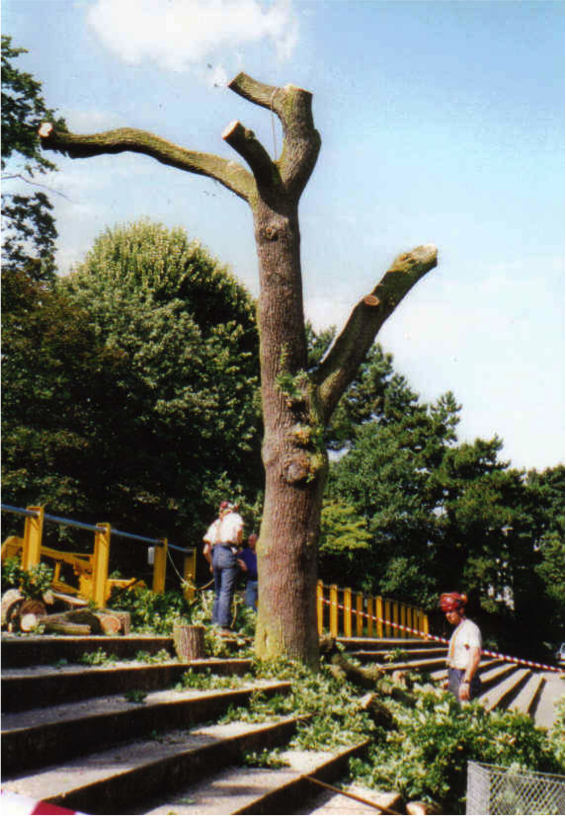 The tree was blamed for us not gaining promotion to the Football Conference from the Isthmian League at the end of the 1992-93 season. We finished the campaign second to Chesham United who declined the invitation to join the Conference. We were keen to accept in Chesham’s place but the Conference ruled against the club, stating that it was dangerous to have a ground with a tree in the middle of a terrace.

A Tree Preservation Order was put in place after the failed promotion bid, which meant that the club could not have the tree removed even if it wanted to. But when it was discovered that it was diseased (with ‘brown rot’) the club moved quickly to have it felled. The tree was cut down on 25th August 1998. A number of supporters walked off with souvenirs while the trunk was sculptured and can be seen to this day lying flat in the recreational area of Clarence Park.

We have 140 guests and no members online