The Road to Hollywood

Unsurprisingly, a lot of fuss has been made regarding our F.A. Cup match againt Boreham Wood on Saturday October 14th 2017 being shown live on the ol’ goggle-box. Whilst it may be the first time that a City match has been screened in its entirety live on television, it is close on 100 years since we first appeared on screens even larger than the average home-theatre.

Our halcyon days of the 1920s have been well-documented for the impact that Wilfred Minter, Harold Figg and the rest of them made on the various football grounds upon which they enjoyed tremendous success. But, it appears, that the great City side from back then were also stars on the silver screen.

St Albans City was founded in 1908, coincidentally the same year that St Albans also had its first cinema, the Alpha Palace Theatre that later became The Odeon and, today, The Odyssey. But it was another cinema, The Grand Palace in Stanhope Road, that took the football club to the big screen. During the 1920s two attendances of over 9,700 and several of over 7,000 were seen at Clarence Park, as we won five league titles and reached the semi-final of Amateur Cup on three occasions. The thirst of the locals for the football club was insatiable and The Grand Palace, which opened in 1922, wasted no time in looking to attract the regulars from a stone’s throw away in Clarence Park to the 1,500-seater cinema.

City’s first appearance in the last four of the Amateur Cup was on 17thMarch 1923 when they faced Holloway-based club London Caledonians at Luton Town’s Kenilworth Road. The Calies, a club mainly for Scottish players, had been founder members of the Isthmian League and won it at the first attempt in 1905-06 and five times by the start of the Great War. The 1922-23 season was the Calies first taste of genuine success in the Amateur Cup. Top amateur clubs, and the Amateur Cup in particular, attracted huge gates at this time and 13,920 made their way to Kenilworth Road to see City, then in the Athenian League and, in effect, one division below the Caledonians, stumble to a 2-0 defeat.

In spite of the outcome of the match the Grand Palace Theatre, from Monday 19thMarch, showed the game, presumably in full, for the whole week. Sadly, no record can be found of how many people attended each showing but one would imagine that the Saints defeat will have had a detrimental effect on those attending. However, the prospect of seeing the local side on the big screen, there being no television at this time, will also have pulled in a good number of City supporters and curious onlookers. 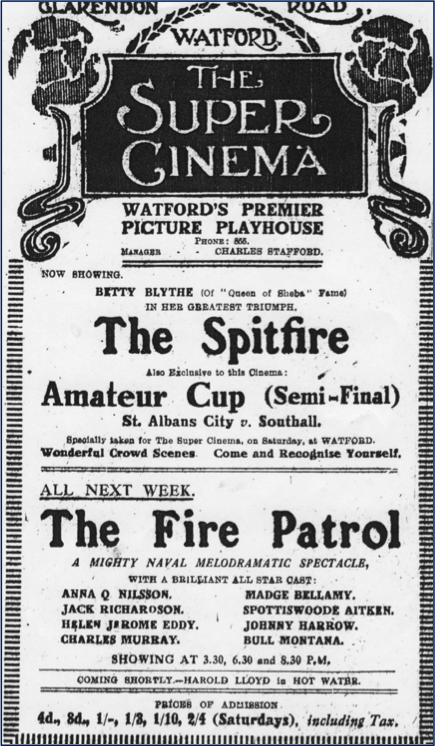 Two years after the London Caledonians match and City were back in the semi-final to face Southall at Vicarage Road, Watford. The match, played on 14thMarch 1925, attracted a gate of 18,797 and the game was filmed especially for The Super Cinema that resided in Clarendon Road, Watford. The poster for the cinema does not make clear whether or not the whole match was shown on the big screen but tried to entice punters by stating; ‘Wonderful Crowd Scenes, Come and Recognise Yourself.’ Strangely this match was not shown at the cinemas in St Albans with The Super Cinema boasting that it was filmed exclusively for them. The large attendance was the second highest seen at Watford’s home at this time.

The meeting with Southall ended as a 1-1 draw with Redvers Miller scoring for the City. For the replay at Brentford’s Griffin Park the following Saturday over 2,000 supporters travelled from St Albans but their journey home was not so cheerful as Southall prevailed, 1-0. As far as is known this match was not filmed.

We have 212 guests and no members online