City Take to the Road

This From the Vault feature is all about City on the Road, Awaydays, whatever you want to call them. Away matches have a feel all of their own, totally different to home games, even more so when you go to the game as either one of a handful of followers or as part of a marauding mass of ever optimistic supporters. The further away that it is the more magical that it becomes. 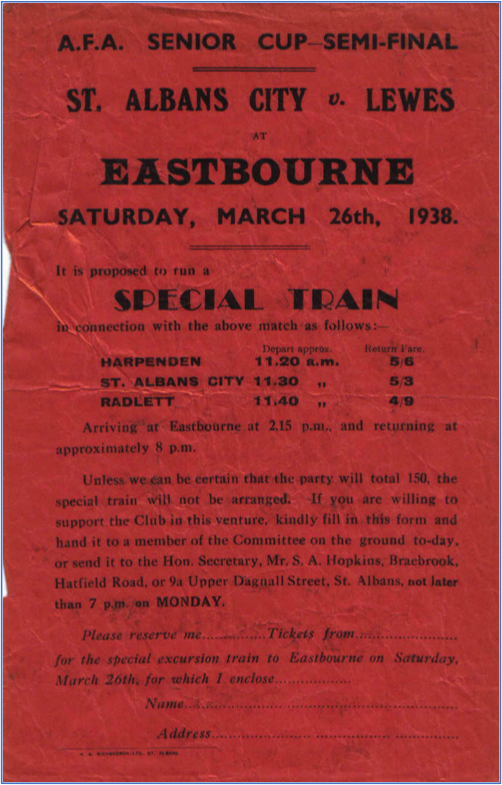 The flyer for our A.F.A. Senior Cup semi-final tie with Sussex County League side Lewes on 26th March 1938 is a wonderful slice of City history. The match was played at The Saffrons, the home of Eastbourne Town (then simply known as Eastbourne). The flyer states that 150 names were required for the booking of a special train to be made. Despite it being a pretty lousy season for the Club, with us finishing bottom of the Isthmian League, the required number of bookings were secured.

The supporters were entertained most royally on the journey by Bert Crownshaw’s gramophone, Wally Cohen on his ukulele and the ‘Glee Party.’ The programme notes for our next home match said that they kept supporters ‘merry and bright.’ The most interesting thing about this is that Crownshaw and Cohen were City players at the time and both played in the match that finished goalless. Another flyer calling for 150 bookings was also produced for the replay with Lewes at Sutton United’s Gander Green Lane home two weeks later. The thought of the players providing entertainment en route to a match brings to mind our FA Amateur Cup tie at Harwich & Parkeston in January 1972 when John Mitchell took a ventriloquist dummy with him on the train and played with it on the way back from Dovercourt Bay railway station. Even more unlikely than that were the occasions when Bob Dowie would recite poetry on the coach.

Somewhat more than 150 supporters made the trip Loakes Park for another cup tie on 25thFebruary 1950, as City faced Wycombe Wanderers in the 4th Round (quarter final) of the Amateur Cup. The attendance was given on the day as 14,926 but since then Wycombe’s club records have listed it as 15,820. Whichever figure one goes for it is an astonishing gate and amongst it were 46 coach-loads of St Albans City supporters. The number of City followers at the game was given as 2,700. Our cup run ended that day with a 4-1 defeat but referee A.H. Blythe is said to have been under the impression that St. Albans had won. His match card was simply headed with ‘blue’ and ‘gold’ rather than the names of the two teams.

Back on 13th March 1920 the travelling City support did succeed in outnumbering the fans of the home team when we made the journey to Castle Bar Park, West Ealing, to face the Great Western Railway for a Spartan League fixture. An Alf Furness goal secured the points for the Saints but it is the attendance that catches the eye, as The Hertfordshire News match report states that the game took place; ‘before half-a-dozen spectators, the majority of whom were City supporters.’

City supporters turned out in force again when we reached the semi-final of the Amateur Cup in 1970; in the quarter-final was a revenge-fuelled success at Wycombe in front of a crowd of 10,200. The supporters club took 20 official coaches filled with City supporters and it is believed that another 20 were booked through other organisations as City had around 2,000 spectators in a crowd of 6,048 against Dagenham at The Den, Millwall.

For obvious reasons cup ties always attract good away support (one hopes that efforts by the F.A. and Football League clubs to diminish the value of the F.A. Cup do not adversely affect our support for the competition) and it is interesting to see these high figures compared against the numbers quoted during our one season in the Conference National, 2006-07. Our lowest away recorded support was 45 at three games while the highest number of travelling City supporters were found at Oxford United and Rushden & Diamonds, where gates of 6,190 and 2,488 respectively, included 214 from our corner of the planet.

We have 214 guests and no members online