In The Footsteps Of The Conqueror

Back in 1909 a group of dignitaries from Caen was welcomed to St Albans for a visit that was reciprocated a year later with St Albans despatching a large number of councillors to the French town. Also included in the party of 36 that went to Caen were artist and illustrator Frank Salisbury, and reporters from the Herts Advertiser (H.B. Carrington) and St Albans Post (S.L. Giraud). 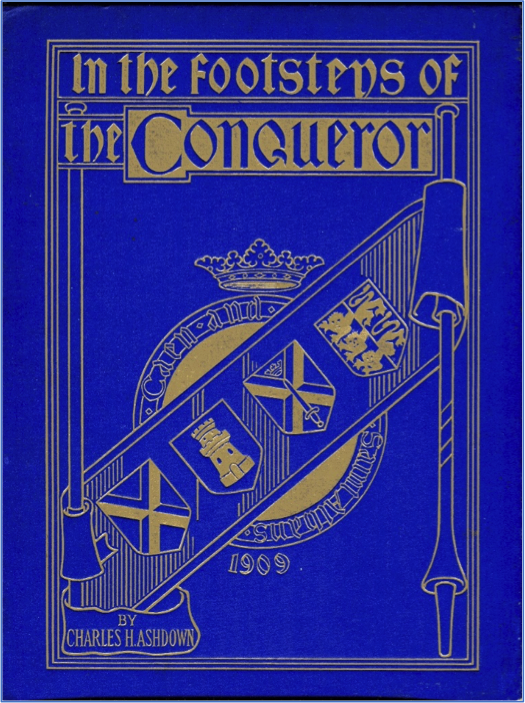 A copy of a book, written by Charles H. Ashdown and published in 1910, that goes into great detail about the exchange visits has recently come to light and provides a fascinating insight into a multitude of sightseeing trips that the large parties embarked upon.

Clarence Park opened just 15 years before the French came to England and provided the backdrop for a couple of significant events during the visit by the Mayor of Caen, Pierre Charles Rene Perrotte, and his colleagues. Arriving at Victoria train station in London on Monday 5th July the French party stayed at St Ermin’s Hotel in the capital on the Monday night before visiting the Houses of Parliament on the Tuesday and the National Gallery, Westminster Abbey and Hatfield House on the Wednesday. Once in St Albans they stayed as guests in 20 houses across the city and were greeted handsomely by the locals with streets and buildings bedecked in the Union Jack and Tricolours.

Places of interest that they visited in St Albans included Roman Verulamium, St Michael’s and the Abbey. They were also entertained with a huge gathering at the old Drill Hall. On Thursday 8th July a pageant, featuring children from various schools from the city, was put on in their honour at Clarence Park . There then followed several displays of sports with the Clerk of the Course being Jack Dickerson. ‘Dicky’ was a master at the Hatfield Road School but was previously a noted goalkeeper and was captain of the original St Albans Football Club when they lifted the Herts Senior Cup for the first time in 1893. He later turned his hand to refereeing and in 1911 became the first referee to dismiss a player in the final of the Amateur Cup.

The day after visiting Clarence Park the French took in Windsor Castle and sailed on the Empress of India up the Thames to Marlow. The return trip from Victoria to Newhaven was made on the Saturday with the party then making the passage back to Dieppe.

But the French had not seen St Albans for the last time and in December 1909 a team representing Caen, but consisting of players from six different clubs, faced the St Albans Crusaders at Clarence Park after undertaking a familiar trip via Dieppe, Newhaven, Victoria and St Pancras to the Midland Station at St Albans.

Sadly, the match did not provide a spectacle that would go down in football history as the Crusaders cantered to an eight-goal lead by the interval and eventually ran out winners by an emphatic 12-2 margin. 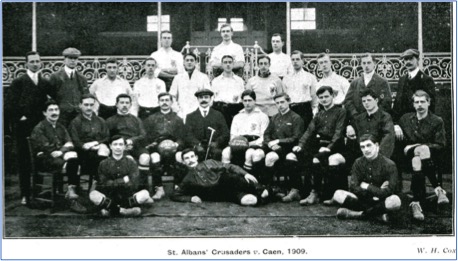 The Crusaders team (lining up in the familiar 2-3-5 formation of the day) was: H.B.Mole; R.Gabel & G.D.Thomas; H.Dunham, A.E.Faulkner & C.S.Webdale; E.J.Dodd, R.R.Scott, H.G.Tabernacle, T.Holyoak & W.B.Clark. Of that Crusaders team just one, Billy Clark, played for St Albans City. Billy made 34 appearances for the City between September 1912 and September 1920 scoring 12 goals. He scored twice in the Boxing Day match at Clarence Park against Caen.

The footballers from Normandy, one suspects, enjoyed the hospitality offered by St Albans rather more than they did their day at the Park and took tea, along with appropriate speeches, in the splendour of St Albans School.

The following Easter saw St Albans Crusaders head for France for a return fixture. The party went via Newhaven and after spending Friday sight-seeing in Dieppe headed for Caen. As with the earlier visit to St Albans, the guests were afforded a great deal of attention and close on 2,000 attended the match on Easter Saturday, 26th March. Once again the Crusaders went on a goal spree with Caen defeated 9-1. The Crusaders played one more game, on Easter Monday, before heading for home when they beat Dieppe 2-1 with Clark setting up the first goal and scoring the second. The Crusaders had expected to be presented with a cup at a luncheon after the game but the Dieppe team were determined not to part with it and reinstated a goal that had been disallowed for offside during the game; thus, recording a 2-2 draw!

We have 255 guests and no members online