The Day City Cornered The Germans

What had been a good day for St Albans City with the appearance of 90-year-old former Saint Norman Griffiths at Clarence Park for the meeting with Lowestoft Town (6thOctober 2012) was soured by going out of the FA Cup. But the mood was lightened after the final whistle by the sight of Herbie Smith walking around the ground.

Players were not called legends back in Herbie’s days but since hanging up his boots the tireless pocket dynamo has taken on legendary status at Clarence Park. Herbie scored 73 goals in 282 games for the City between September 1959 and April 1967.

What made the chance encounter with Herbie particularly special was that he had with him four photographs, three of which we had seen before. The previously unseen one (below) has turned out to be an absolute gem, as it is possibly the earliest colour photo of a City team. Unfortunately, the quality of the image here is not great as it is a photo of a photo. 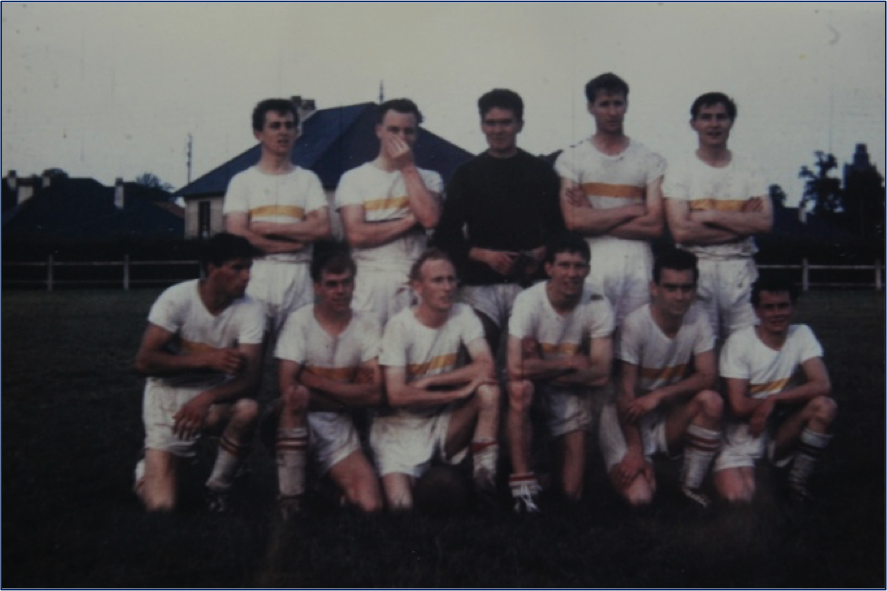 The picture was taken on 6thJune 1960 in the French town of Verneuil-Sur-Avre, which is in the Eure district of Normandy. City were in France to compete for the Victor Linart-Ilford Trophy, having replaced Clapton when the east London club were unable to accept their invitation to take part and defend the trophy that they had won the previous year.

St Albans’ 1st Round (effectively semi-final) opponents were Stade Vernolien, and with goals from Ron Woods, Don Falconer, Danny Desmond, Alan Carter and John Stevenson, the Saints hardly endeared themselves to the approximately 2,000 locals in the stadium by winning 5-0.

Welper booked their place in the final by beating Le Harve’s Reserve side 4-3.

Herbie got a run out in the final when Stevenson picked up an injury after 15 minutes but it was the unusual substitution of Dave Darby in the second half that played a significant part in City winning the trophy. Darby was not injured but had to get on an early flight back to England due to taking examinations the following day. He made way for Keith Rand who fired City ahead in the first half of extra time. Five minutes from time the Germans salvaged a draw and where as nowadays we would all sit back and watch the Germans win on penalties things were different back then.

Penalty shoot-outs had yet to be conceived and instead the trophy was awarded to St Albans City by virtue of having won five corners to the Germans one. Justice.

City travelled to France from Newhaven on the Saturday going by steamer to Dieppe and coach to Verneuil-Sur-Avre. The party, which numbered 24, was greeted by an official reception with Saints hon-secretary Harry Stacey presenting the local mayor with a water-colour painting of the Abbey. Pennants were exchanged between the two teams prior to the final, which attracted a crowd of 2,500.

Herbie is to the far right of the front row of the team photo.

We have 105 guests and no members online