The thrilling draw played out at Clarence Park the previous Saturday, coupled with news of the large crowd, clearly whetted the appetite of football supporters from St Albans to south east London as an unprecedented number of people attempted to cram into Champion Hill for the Amateur Cup replay between the two clubs.
The gate of 7,440 for the first meeting was not only surpassed for the replay but possibly doubled, as a vast number of travelling Albanians helped swell the unofficial attendance to over 14,000.
St Albans City were strongly represented amongst the unprecedented attendance. The Supporters Club worked in conjunction with Messrs T.Cook and Sons to run trains to the game at a return fare of 3s 3d. Tickets could be purchased in advance of the day from the City’s Supporters Club.
Such was the demand to see the game that Dulwich were forced to close the gates fifteen minutes before the scheduled 3pm kick off. Inside the stadium there were already over 10,000 people, the attendance was officially given as 10,800, comfortably above the regular 7,000 gates that Dulwich attracted.
The locking of the gates caused considerable problems for the train loads of City supporters travelling to the game, as they only reached East Dulwich Station thirty minutes before kick off. Faced with either returning home without seeing a ball kicked, waiting close to the ground for news of events going on inside, or taking decisive action to get into the ground, the frustrated large crowd took to storming the gates.

It was not just City supporters that piled through the turnstiles and pushed against the fences surrounding the ground, they were joined by Hamlet followers equally determined to see these two great sides in action. Whatever police presence there was at the ground clearly was not sufficient to repel the rebels and it is believed that in excess of 3,000 spectators forced their way into the ground without paying.
The risks taken by many to see the game were terrifying. Hundreds are said to have scaled the roof of the stand and watched the game from up high. The large St Albans following included a group of female spectators who were clearly a formidable unit and joined those peering down on the game from their precarious perch on top of the main stand. It was said that they received a ‘leg-up’ from a local constable who realised that he could not win the battle to stop the ladies from reaching their lofty, and dangerous, vantage point.
Thankfully, the roof held firm; the consequences for those inside and on top of it had it not done so are unthinkable.
Others copied a tactic used at St Albans the previous week and climbed trees to see the game, while another group of hardy spectators took to the roof of an adjoining building. As uncomfortable as these spectators may have been they were, possibly, better and safer conditions than those endured by spectators inside the stadium.
With the stands and terraces packed many people watched the game from inside the perimeter fence and just outside of the playing area. Twice the referee was forced to halt proceedings during the first half as spectators walked, stumbled and fell onto the pitch. One report talks of people being tangled in the goal net, as too many fans crowded onto the terraces behind the goal. Also, while the match was in progress, a section of the wooden perimeter fence collapsed under the pressure of the huge crowd.

Not only did the attendance at each of the two games set new records for both clubs but the takings were also the highest for the competition prior to the semi-finals since its inception in 1893. The receipts from the turnstiles for the replay totalled £354 and would have been higher had those who got into the ground by alternative methods also paid.
It was a breathtaking backdrop to the showdown between the two champions of the top amateur leagues in the south of the country.
St Albans were unchanged from the first meeting with Percy Bird and Harold Figg declared fit to carry on from where they left off the previous week. Bird had the stitches (inserted during the first meeting with Dulwich) removed in the days leading up to the replay. Dulwich also fielded the same XI from the drawn game.
For the first meeting Dulwich were forced to wear a change from their normal colours due to the possibility of a clash between their blue and pink shirts and City’s blue and gold striped kit. Dulwich wore white shirts at Clarence Park and for the replay City turned out in a white shirts and blue socks.

Pierce gets City off to perfect start

City captain George Meagher joined his Dulwich counterpart, goalkeeper Ernest Coleman, for the toss-up and, having called incorrectly, was given the prospect of attacking down the Champion Hill slope for the first half and up it after the interval as conditions became heavier.

St Albans could hardly have started the game better, attacking with pace and precision they breached the Dulwich defence to open the scoring on five minutes. Both sides had chances inside the opening minutes but when Coleman failed to punch clear a Redvers Miller corner Peter Pierce was on hand to prod City into the lead from close range. 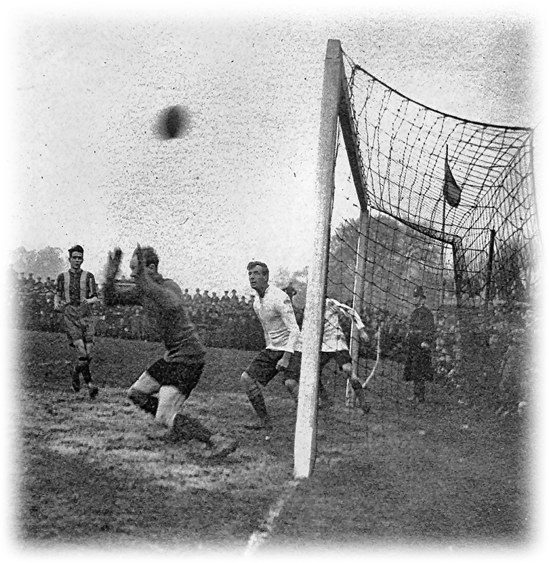 Five minutes later and the game had to be stopped for the first time when the crowd between the St Albans goal and the corner flag were forced to take refuge on the pitch after part of the perimeter fencing gave way. Play resumed for just a short while before there were more problems behind Tennent’s goal that included the goal-net supports being brought down. Southampton-based referee Mr Tolfree, with the assistance of the police, soon restored order and play continued.

St Albans had opportunities to increase their lead but just after the half-hour the Isthmian League champions pulled level with a well-worked goal. Gooch started the move before passing to Edgar Kail. The England Amateur international exchanged passes with Bill Davis before taking the return in his stride and stroking it past Tennent in the City goal (below right). 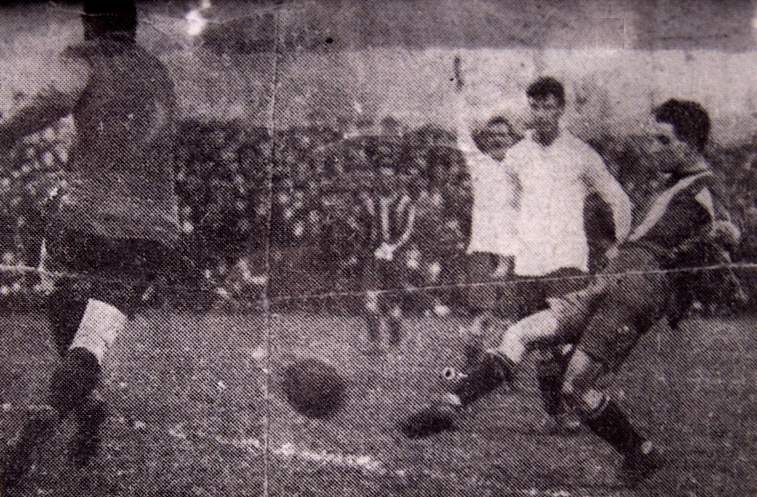 The sides being level at the interval was deemed fair overall but St Albans were to rue not adding a second goal before Dulwich got fully into their stride. While the pitch was still fairly firm the nippiness of the smaller City players caused Hamlet problems, but, as the surface became heavier, the physically stronger players in the home team came to the fore.
Five minutes into the second half St Albans fell behind when Tennent punched away a cross by Gooch only for the ball to be immediately returned into the penalty area. Following a scramble the ball broke loose to Davis whose low shot from the edge of the box beat the Saints custodian and entered into the net inside one post after the striking the one on the opposite side of the goal.
St Albans rallied positively, they were in no rush to see their unbeaten record against fellow amateur sides, which stretched back to New Year’s Day 1921, come to an end. Chances went begging and Wilfred Minter had to have treatment after taking a hefty knock as the game drifted away from the Saints.
But 17 minutes from time the battle was all but over when Hamlet added a third goal courtesy of some wizardry by the legendary Kail. Using his pace, Kail got away from Meagher and weaved his way past Tommy Field and closed in on goal before slipping the ball to Sid Nicol who hammered in the third and final Dulwich goal. 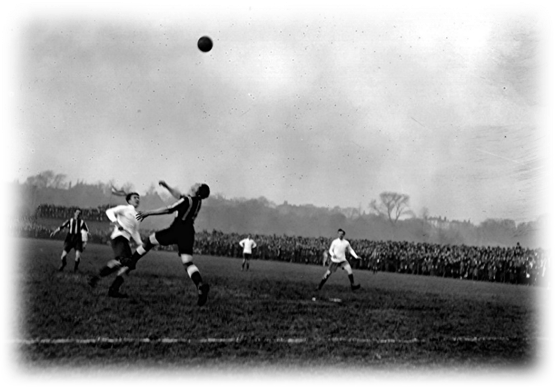 We have 165 guests and no members online