Records tumble in battle of the champions

A match played at great pace between two of the biggest clubs in the south of England could fill several pages on its own but is almost overshadowed by events off the pitch that gave an indication of the progress St Albans City were making in the world of amateur football during the 1920s.
City had enjoyed little success in the Amateur Cup up to this point, save for a run to the quarter-finals in 1912-13. The Citizens had a taste of the big time during that run when coming back from two-down to defeat holders Stockton 3-2 at Clarence Park (attendance 2,912) after a 1-1 draw at Teeside in front of a crowd of around 6,000.
Removing the cup holders from the competition was a remarkable achievement for a Spartan League club, but now, as members, and the reigning champions, of the Athenian League City faced a formidable task in trying to oust Isthmian League champions Dulwich Hamlet from the Amateur Cup.
City’s form going into the 3rd Round tie could hardly have been better. Since losing 4-0 at home to Ilford in the 1st Round of the Amateur Cup on New Year’s Day 1921 they had not lost to another amateur side. The only defeat between the Ilford game and the arrival of Dulwich more than 13 months later came at Priestfields, where the professionals of Gillingham won 3-1 in the FA Cup 6th Round Qualifying in front of 8,500 spectators.

A clash between two sides in outstandingly good form was expected to attract a good crowd to Clarence Park but what transpired exceeded all predictions.
The gates to the ground were opened at 1.45pm, by which time large queues had snaked along the outside of the park. At this time the turnstiles were at the end of the driveway leading into the park from Clarence Road, rather than adjoining the football ground, as became the case in later years.
Prior to the visit by Dulwich the record attendance at Clarence Park was set on 6th November 1920 when 3,500 spectators looked on as City saw off Hampstead (later to become Hendon) in the 3rd Round Qualifying of the F.A. Cup. That attendance figure was surpassed long before kick off against Dulwich and the queue outside the park grew substantially when a special train containing 900 visiting supporters pulled into the nearby Midland Railway Station at 2.15pm.
Many people thought they would not get into the ground so ‘rushed’ one of the gates to gain entry. A small number of spectators did get into the ground but most were repelled and left with no alternative but to rejoin the lengthy queues. The attendance was announced as 7,440, which was more than 75% higher than for the Hampstead tie, with receipts of £225 9s being more than £100 above the previous record for the Park.
The receipts were boosted by the decision of the Club’s committee to increase the cost of admission. The Supporters Club, supported by the local press, complained at this move and the Club did consider the appeals at their next meeting but with all the advertising bills already printed they stuck by their original decision.
The unprecedented attendance included a number of notable figures from within the game. The Football Association’s Selection Committee was well represented and included Alfred Davis, after whom Marlow’s home ground is named. He was also at the Park a month earlier to see Bertie Butcher, Wilfred Minter and Ted Miller score during a 3-2 Amateur Cup win over Oxford City that had set up the game against Dulwich. The Isthmian League was represented by its secretary Henry Huband JP and was doubtless hopeful that Dulwich would not go the same way as fellows Isthmians Oxford City. Mr Huband described Clarence Park as one of the most picturesque grounds he had seen.

Despite the potential for problems with such a large crowd present there were few reports of unsavoury incidents although one spectator, bedecked in the colours of Dulwich Hamlet, did dash onto the pitch and kick the ball away when a free kick was awarded against his side. The miscreant received no harsher treatment than being marched back to his place in the crowd by a policeman. There were three reports of pick-pocketing during the afternoon.
Both teams were photographed prior to the kick off. To the left of the photos the end section of the tea chalet that was outside the football ground, and was run by the Manner’s family, can be seen. 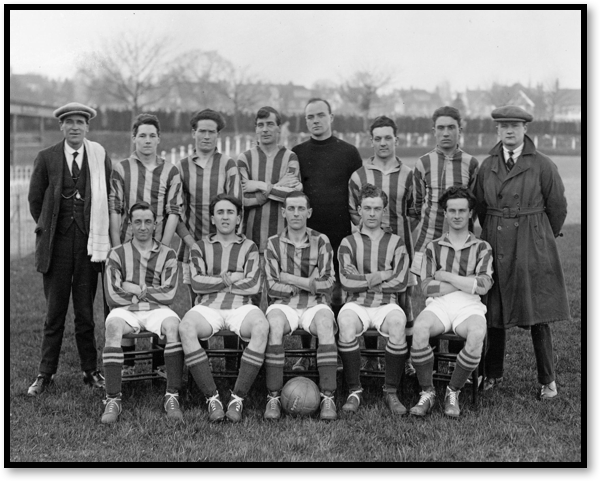 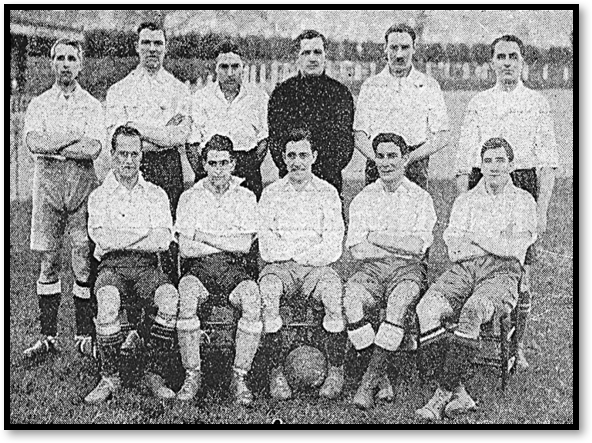 The day was bright and clear but an overnight frost, melting in the early spring sunshine, made for a slippery surface that became heavy and strength sapping as the afternoon wore on.

It was the visitors who settled the quickest, so it was a surprise when, eight minutes in, Redvers Miller played the ball out to Phil Pierce whose cross fell between Bertie Butcher and Hamlet full-back G.F. Goodliffe. As the Dulwich player hesitated Butcher darted in and ran on to fire low past England Amateur international Ernest Coleman in the visitors’ goal.
The match opened up with Wilf Minter, Harold Miller and his brother Redvers all going close to increasing the lead that the Athenians held. Dulwich also threatened to score throughout this time and caused City some concern from a number of corners. But it was in open play that Hamlet drew level when a long pass sent A.E. Hunt clear of both Harold Figg and Fred Holland before he slipped the ball inside for Bill Davis to score past City ‘keeper W. Innes Tennent on the half hour. Tennent, previously with Dulwich, was standing in for ‘flu victim W.Hempsall

The huge crowd had to wait just a further seven minutes before St Albans regained the upper hand. The Miller brothers combined to find Minter who, penned in, laid the ball onto Butcher who duly drove in his second goal with some force.
Dulwich spent the remaining minutes of the half laying siege to the St Albans goal, which was kept intact at some cost. Percy Bird suffered a nasty injury just above an eye when stooping to head clear as Davis closed in. Bird had to leave the field for 15 minutes while Dr J.W. Cleveland, the Club Doctor and who was present at the game, took the centre-half to his surgery and inserted three stitches.
Figg also saw the game out in some discomfort after taking two heavy knocks inside the opening five minutes. This was a potentially significant point in Figg’s career. One month prior to this game he played in an England Trial Match at Norwich, waiting for him at The Nest, Rosary Road, Norwich, was a Crystal Palace scout who was unsuccessful in an attempt to attract him to Selhurst Park. Tottenham Hotspur secretary Peter McWilliam wrote to St Albans expressing interest the City’s half-back and offered both him and Wilf Minter a trial. Just a year earlier Tottenham, under the captaincy of another former St Albans City player, Arthur Grimsdell , had lifted the FA Cup.
The second half opened at a frenetic pace and both sides continued to threaten further goals before, on 58 minutes, the majority of the spectators were silenced as Dulwich drew level for the second time. As with the first goal, Hunt and Davis were involved and it was from a pass by the latter that Sid Nicol scored from close range.
St Albans applied a lot of pressure during the final 30 minutes of normal time but found Coleman justifying his international status. Dulwich were not without chances but it was the Citizens who pressed with most threat. Minter was one of those to go close to snatching a winner on his 24th birthday. This was only his 35th game for the City since joining from Hatfield Road old Boys but already he had 30 goals to his credit and was well on his way to becoming the Club’s record goal scorer.
Butcher may have scored both of the City goals but the most impressive performer on the day for the home side was George Meagher. The City captain had missed the previous weeks’ game, a 7-0 Athenian League win at home to Cheshunt, following the tragedy of three family bereavements.

We have 196 guests and no members online