After playing home matches on Jacob Reynolds (left) land in Hatfield Road for two years the club moved to a new site for the start of the 1883-84 season with Bernard’s Heath becoming the Saints home ground. 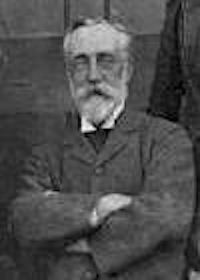 Jacob ReynoldsDespite the move to a new ground St. Albans were still in debt to Jacob Reynolds, as at this time Bernard’s Heath was also part of his territory. The Heath possessed a far larger playing area than it has today and at the time the football club played its matches there the ground was often referred to as the County Cricket Ground.

A large increase in the fixture list was made for the Saints third season with twenty-two scheduled (twenty-one were actually played). No longer were St. Albans easy pickings for other clubs as the Saints embarked on an unbeaten run spanning eleven matches that included five consecutive wins and a 5-0 thrashing of Watford side Nascot. But even Nascot got off lightly compared to the Watford Christ Church Institute who lost 9-1 at home to the Saints and then, three weeks later, 8-0 at St. Albans. 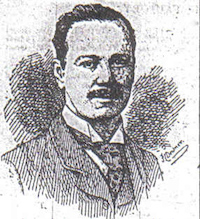 Fred A. SargentThe highest score that season though came against Barnet club Lyonsdown with the Citizens putting a dozen goals into the back of the L.Hasluck’s net with. Two players, Fred Sargent (right) and H.T. Smith, scoring four apiece while Crawford, from Berkhamsted, chipped in with a hat-trick. Lyonsdown arrived at St. Albans short of four players and were loaned a quartet by the Saints (L.Sells, Williams, H.O. Chatterton and F. Johnstone).

Of the 21 games played just 14 goals were conceded in 20 of them, unfortunately the remaining two matches, both against Hendon, saw the north London club put the ball in the back of the Saints net six times on each occasion. St. Albans were well below full strength for the first encounter against Hendon, as they also fielded a side against St. John’s College on the same day, but for the return match the Saints side was as strong as might be expected. The away game with Hendon was something of an oddity as St Albans turned up to play the game on the 13th October only to discover that they were a week early and had to return the following Saturday. That particular Hendon club are not connected to the latter day Dons and became extinct in 1934.

Sargent’s goal spree against Lyonsdown was one of four hat-tricks he scored during the season. He became the first player not only to find the back of the net three times in one match for the club but also the first to notch a double hat-trick, which he achieved during the 9-1 win against the Church Institute – not a bad achievement for someone who began his career as a full-back before moving up to half-back and then centre-forward.

The goals scored by the prolific Sargent may have caught the attention of other clubs but one of the most curious incidents of the season came during a goalless draw with Clarence at their Cricklewood home when, on 1st December, two footballs burst during the course of the game. With the second ball meeting its demise five minutes from time the two teams decided that it was an appropriate moment at which to head for the changing rooms. That game, however, was not the only one to fail to go the whole distance as the matches against Hitchin and Oxhey during February and March both ended after 80 minutes, while the 2-1 win at Aldenham School was terminated after just seventy minutes.

We have 196 guests and no members online