Alec SargentWith the formation of the Hertfordshire Football Association football in the county took a significant forward step in 1886. St. Albans were at the forefront of the new organisation with their secretary Richard Cook and Alec Sargent (right) of Watford Rovers, having overseen arrangements for that first inter-county fixture against Surrey, being appointed, jointly, secretary to the Association. Due to other commitments, Cook stated he would only be able to fill the position for a short term but would do all in his power to ensure that the new organisation would be successful.

The meeting that brought about the formation of the County Association was to have been held at the Football Association offices in Holborn Viaduct but had to be moved, at late notice, to the nearby Farringdon Hotel. Amongst those present for the meeting that was to change the course of Hertfordshire football on 12th May, 1886, were; Richard Cook, Christopher Miskin, George Hamlyn, Cecil Hugh Aylen and James Robert Ball, all representing St. Albans, whilst Watford sent Fred and Alec Sargent, Charles Wheeler, W.Horton, Valentine, Capell and Parkes as their representatives. Hoddesdon sent along two members, H.H. Stevens and G.W. Newbury. E.L. Swift, who was voted into the chair, looked after the interests of Bishop's Stortford. The meeting agreed to invite the Earl of Verulam - Lord Lieut. of the County - to be the first president of the Association. Several clubs not present at the meeting indicated they were keen on supporting the new body, these included; Wheathampstead, Hitchin, Stevenage, Harpenden, Cheshunt, Aldenham School, Rickmansworth, Barnet, Boxmoor United, Hemel Hempstead, Oxhey and Berkhampstead. Membership of the Herts F.A. was set at one guinea per year. The proposal to form the new Association was put forward by Stevens of Hoddesdon and, needless to say, was carried unanimously.

With the Hertfordshire Football Association now in place discussions took place as to the colours to be adopted and very enthusiastic support was given to the suggestion of playing matches against other counties for a County Challenge Cup. In fact, Hertfordshire played five matches during the course of the season kicking off with a 4-2 win over Surrey at Guildford and ending with an 8-0 victory over the same county at St. Albans. In between times Herts lost 3-1 at home to Hunts then 5-0 in the return match, and drew 0-0 with Bedfordshire at Holywell Hill. The games were a success for Fred Sargent who scored once in the opening match against Surrey and then four times in the 8-0 win. Other St. Albans players to turn out for the county were Cecil Hugh Aylen, W.Martin, H.T. Smith, J.Bethom, Horace Paul and H.O. Chatterton. Chatterton was the first goalkeeper St. Albans provided for the county, later in the decade he was appointed Assistant Hon. Secretary to St. Albans Cricket Club. Cook acted as an umpire.

County matches were not the only ones in which Sargent scored freely, he netted four times for St. Albans in games against Acton and Vulcans, and bagged all five during the Saints first win of the season, a 5-1 romp away to Boxmoor towards the end of September. Although still scoring goals for the Saints, Sargent was also listed as a Watford player. He continued to play the occasional match for St. Albans over the next three seasons but during eleven years with the Saints neighbours he scored 161 goals in just 152 games. He played in 12 games for St Albans during 1885-86, scoring a known 20 goals. He probably scored a few more than that as the scorers cannot be found for one match in which he played. Horace Webdale was the scoring highest scorer with 14 in 17 games.

Admission for St. Albans’ season was held at 2d although members and ladies were granted free entry. Subscriptions were set at 4s but if payment were delayed until after Christmas then the fee rose to 5s.  In addition to the admission charge the club also boosted its funds with a function held at the Town Hall on 11th November. In preparation for the forthcoming season, St. Albans improved their facilities at the Holywell Hill ground with the erection of fencing around the meadow. To further enhance the ground, improvements were carried out to the drainage of the pitch but this was not an unqualified success and the need existed for further work to be undertaken.

Prior to the club’s first serious match of the season on 19th September, a 2-0 home defeat by Luton Town, the Saints had a trial match between a Captain's XI and the Secretary's XI that the latter won 6-0. All of the Saints games were of a friendly nature but that was of little consolation to the Luton Victoria player, Brackley, who, during the match at Holywell Hill on 24th April, unfortunately sustained a broken leg, at this point the game was abandoned. Curiously, just a week earlier St. Albans had played Luton Town in a Benefit Match for the Brentford player Litchfield who also suffered a broken leg this time playing against Luton. A collection was taken for Brackley during the Easter Monday game against Champion Hill, this raised £7 8s.

St Albans made the return journey to Luton’s Dallow Lane home on 10th October and lost 1-0 with George Deacon scoring for the Strawplaiters. The Herts Advertiser gave the referee a measure of praise when it said, ‘The umpires were – Messrs. R.Cook (St. Albans) and T.Ellingham (Luton). Referee - T.Brown (Luton), who, we are glad to say, acted with impartiality – a merit which one does not always find distinguishes Luton officials in games of this kind.’

This season saw the formation of another new club, Wheathampstead, whose first opponents were the Saints 2nd XI on 7th October. Wheathampstead won that meeting 3-2 and when the clubs met at First team level on 17th March the village side triumphed again, this time 2-1. St. Albans also provided the first opposition for the newly formed Harpenden club, the Saints sent their 3rdXI to face the Harps at Station Road on 14th November and returned home with a 6-0 win under their belts.

The Albanians were still a year away from playing their first competitive match. The Herts Standard published a fixture list and stated the following that perfectly illustrates the non-competitive nature of games at this time. 'On Wednesday next the 2nd XI will play at Wheathampstead, drive from headquarters at two o'clock punctually; any members wishing to play will kindly give their names to the secretary at the ground today (Saturday)'.

As with previous seasons there were a number of high scoring affairs with eight goals being put past both Dalston Rovers and Vulcans; the Dalston match – played on Boxing Day – attracted a particularly large crowd. In all, the Saints scored four or more times in a game on 15 occasions and received just two drubbings themselves when going down 6-1 at home to Caledonians and 5-0 at Hitchin. With all matches played still classed as friendlies the outcome was obviously of only limited importance but, in a season containing a mixed bag of results, the Saints did record three runs of four consecutive wins. For the first time in St. Albans brief history the season extended beyond April into May with the final match being a 2-0 home defeat at the feet of Caledonians on the 1st.

Two players who went on to have long careers with the Saints made their debuts this season – James William Dickson and H ‘Jock’ Francis – though both also continued to play for the Grammar School for whom they scored with great regularity. Dickson, who also played for Watford and Luton Town, was a fine all-round sportsman who was good at cricket and tennis and a full back for the County at hockey; something that enabled him to play more than one sport at Clarence Park . A good organiser and two-footed footballer, Dickson, whilst still with the Saints, went on to be Hon. Sec. of the Exeter College (Oxford) Football Cub. Aside from local players the club also enlisted the help, for just one game, of the brothers H.S. and W.J. Gee, and H.W. Wigan and E.S. Swift all from Bishop’s Stortford. That quartet also played for Hertfordshire. 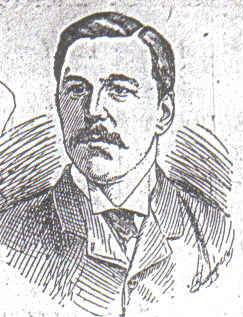 Arthur Tempest BlakistonOne player who did not play many games for the club but whose intermittent inclusion over the next six seasons aroused no shortage of interest was A.T.B. (Arthur Tempest Blakiston) Dunn. Born in Whitby, Yorkshire, he was educated at Eton and Cambridge and played for the Varsity team, more importantly he also played four times for England, captaining them to a 4-1 win in Glasgow in 1892 some ten years after his international debut, and appeared in successive F.A. Cup Finals for Old Etonians. In 1882 Dunn was victorious as the Old Etonians defeated Blackburn Rovers 1-0 at the Oval but back at the same venue a year later Dunn had to leave the pitch early through injury and his side went down 2-1 to Blackburn Olympic. Dunn not only captained but was also secretary of the Old Etonians for five years and following his death at Little Shelford (Cambridgeshire) in February 1902, the Arthur Dunn Cup was launched in his honour. His first game for the Saints saw him score four times in a 5-0 win over Bedford Town on 17th October, 1885. He bettered that a year later with all five goals in St. Albans 5-4 win over St. Mary’s Hospital.

We have 692 guests and no members online