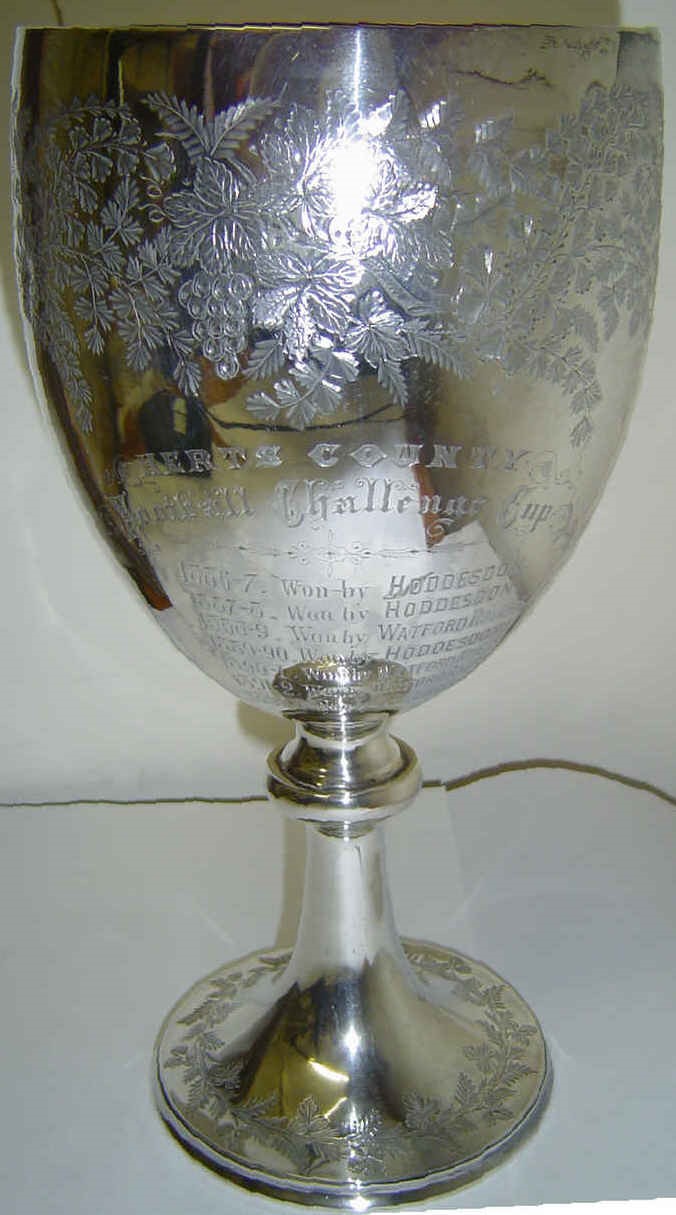 Herts County CupAt a meeting held at the Crystal Palace on the 16th August 1886 it was announced that receipts for the 1885-86 season were £85 5s 2d, there were made up from subscriptions of £51 1s and gate money amounting to £31 15s 2d. After all the expenses had been cleared the football club went into the new season with a balance in hand of 11s 7d. It was agreed that Season Tickets would be priced at 2s 6d.

Christopher Walter Miskin, who made just one appearance during the forthcoming season, stood down as captain to be replaced by Reverend R.C. Marshall, the captain of the Wheathampstead club. Having played in St. Albans second game at the start of the 1881-82 season Miskin went on to feature in more than 60 First team games for the club, all of which were friendly matches.

St. Albans no longer had first call on Fred Sargent as the prolific centre-forward took centre stage with Watford Rovers. He did make four appearances in St. Albans colours during the season but it was to be a further seven-and-a-half years before he would return to make his final two appearances for the club.

Finding a goalscoring replacement for Sargent was a task that St. Albans failed to achieve during the season and the goals were shared between several players rather than one individual. John Charles Lomax, one of three brothers who were regulars for Luton Town, would have been a suitable replacement for Sargent but only played in seven games this season during which time he scored six times.

Overall, it was not a great season for the club despite eight goals being put past Hampstead and nine past Hatfield. The Saints were also on the receiving end with Wheathampstead being the first side to score ten times against them. That 10-3 defeat came during a run of eleven winless games before the club ended the season with four consecutive wins. In defence of the Saints they were a touch out of their depth against Wheathampstead as the village side included players from such clubs as the Corinthians, Old Etonians and Wellingborough.

A match involving somewhat less illustrious players took place on Easter Monday when a friendly was played between the Married and Single men, the married side fared better than in an earlier meeting but still went down 2-1. During the course of the season, 23rd October to be precise, the St. Albans First team faced the new Harpenden club for the first time; the Saints won 2-0 at the Holywell Hill Meadow.

Of far greater importance than any of those friendly games, however, was the match St. Albans played on 6th November 1886. This was the day football in St. Albans took another tentative step into the unknown when the club was one of eleven to compete in the inaugural contest of the Herts County Cup, since better known as the Herts Senior Cup.

Several clubs within the county had expressed a desire to compete for a ‘silver cup’ but at a meeting of the County Association at the Crystal Palace on 23rd August no decision could be reached as to the formation of the competition and the meeting was deferred. It was a busy evening for the landlord of the Crystal Palace, James Gentle, as, immediately following the meeting of the Herts FA, the St. Albans committee moved in for a meeting concerning their club. Gentle, who ran a clothes shop in the town centre after giving up as publican at the Crystal Palace during the early part of the 1890s, had quite a reputation as a good host and earlier in the summer, on 3rd July, he laid on the refreshments for a Mid Herts Tennis tournament at Gorhambury. It was just one of numerous prestigious and major events of the era for which he provided the catering.

Fred Sargent eases St. Albans out of the County Cup

The Herts County Cup finally came into existence during a meeting at the Bedford Head Hotel, Tottenham Court Road, which, at the time, was where the Association had its headquarters. St. Albans were paired in the 1st Round with Watford Rovers. The first competitive match involving a side from St. Albans was to take place at the Rose & Crown Meadow, Watford. The two sides had last met the previous April with St. Albans running out 4-0 winners but Rovers had won four consecutive games between the two clubs prior to then.

Watford made light of atrocious weather conditions to return to winning ways with a 3-0 victory. The man who inflicted most damage to the Saints was Fred Sargent who scored two of the Watford goals but the cause of the Albanians was not aided by goalkeeper H.O. Chatterton having an off day. The custodian was felt to be at fault for a couple of the goals and at half time a decision was made to switch the ‘keeper to back with F. Johnstone going between the sticks. The move to replace Chatterton was not as big an insult as it may appear for he frequently switched between goalkeeper and an outfield position. Although some players from the team that first represented the city five years earlier were still playing none were in the side to face Watford, the line-up being:

In addition to St. Albans, the 1st Round ties in the County Cup that year were the first competitive games played by most of the entrants although Watford Rovers had gained ninety minutes experience of competitive football on 23rd October when going down 1-0 at home to Swindon Town in the F.A. Cup. Despite their early admission into the F.A. Cup, Watford Rovers did not become members of a league until 1896 - just one year earlier than St. Albans. Rovers went on to reach the final of the County Cup, on 26th March, but were defeated 5-2 in the final by Hoddesdon who received the cup from Mr G. Faudel Phillips, the owner of the Balls Park ground at Hertford where the final was contested.

St. Albans and Watford met twice more during the season, both times at the Holywell Hill Meadow, but the Albanians fared no better in going down 4-0 and 7-0. Included in the side beaten 7-0 was A.T.B. Dunn, just a week earlier he had put together a side of his own, which featured several members of the county team, that defeated the Saints 4-3 at the Holywell Hill Meadow.

Identifying exactly just how many First team games the club played during the season has not been as straightforward as it should be. Some games that appeared to be First team matches when going through the newspapers week by week then appear as 2nd XI matches in the end of the season review. To further complicate matters, the Herts Advertiser failed to record the County Cup tie against Watford Rovers at all in the end of season round up. However, when that game is included in the First team records it would appear that St. Albans played thirty-two 1st XI matches during 1886-87 and ten 2nd XI games.

At the close of the season the St. Albans captain, Rev F.C. Marshall, left the club due to moving out of the district. Full-back and county player Cecil Hugh Aylen was appointed as the new club captain.

We have 717 guests and no members online