Season tickets remained priced at 2s 6d for the 1888-89 season. The clubs faced by St. Albans varied wildly from Westminster Criterion and Rob Roy to Fulham and Tottenham Hotspur, but only one competitive fixture was played.

The Crystal PalaceThe club held its AGM on 11th September at the Crystal Palace in London Road where it was revealed that the debt had been reduced to £3 16s 4d. (Photo courtesy of St Albans Museum). This was quite an achievement given the amount of work carried out at the ground during the preceding twelve months. It was anticipated that no more than £2 to £3 would need to be spent on the ground over the coming season, this despite the fact that the club had been moved to a different section of the meadow. At the meeting it was disclosed that the new area set aside for the football pitch measured 120 yards in both length and width, perfectly suitable for the staging of matches. The actual size of the football pitch was 112 yards by 72 yards. The annual rent remained unchanged at £20, this had to be forwarded to Charles Woollam. Richard Cook was once again elected secretary whilst Henry Partridge Smith was the sole nomination for club president and Alfred Herbert Debenham was chairman.

When St Albans first played at the Holwell Hill Meadows in 1884 the land had been in the ownership of George Debenham, he had acquired it in 1852. A one-time Mayor of St. Albans Debenham died in 1883 and three years later Charles Woollam purchased a much-reduced seven-and-a-half acres of the site from Debenham’s widow. Along with Alfred Debenham, Woollam levelled the land and presented it to the Grammar School as their playing field. Alfred Debenham was a Governor of the School.

St. Albans enjoyed an outstanding start to the season but whether the campaign overall could be viewed as a success or not has to be measured by their triumphs, or otherwise, in the County Cup. One of just seven clubs to enter the competition, St. Albans were drawn to play at Hoddesdon on 26thJanuary, the Saints headed across the county defending a 22-match unbeaten run and a winning streak stretching for 15 games. In the month preceding the game St. Albans hammered St. Paul’s (Stepney) and Rob Roy 18-0 and 13-2 respectively whilst back in October Hertford Excelsior were beaten 15-0. Despite such free-scoring form the Saints could not weaken the holders grip on the trophy and Hoddesdon duly took their place in the final after seeing off St. Albans 5-1, Tom Long scored for the Saints. St. Albans’ defeat was not too much of a surprise as it was felt that the team was below full strength and their cause was not helped on the day when county full-back Cecil Hugh Aylen wired a telegram to say that he too was unavailable.

But where St. Albans failed Watford Rovers succeeded and in the final, played in front of around 1,000 spectators at the Holywell Hill Meadow, Hoddesdon, in going down 2-0, suffered their only defeat in the first four years of the competition. Walter Coles and G.R. Bacot, who was making one of his only two appearances for the cup winners, scored the deciding goals. Watford had been at St. Albans just a month earlier to see off Hitchin Town 6-0 in the semi-final with Fred Sargent getting his almost obligatory hat-trick.

St. Albans put the cup defeat behind them to quickly return to winning ways and ended the campaign with twenty-eight wins and four draws under their belts from thirty-three games, just one game was lost. These figures are subject to alteration as the reports did not always distinguish between what was a 1st XI and 2nd XI fixture.

The 2nd XI suffered five defeats in 11 matches but the club itself may have considered some of these to have been 1st team games at the time. In theory, the 1st team remained unbeaten at home throughout the season but a friendly played on 6th April is one such 2nd XI match that may have been billed as the First team. The opposition was put together by Sidney Margetts Stanley who brought a side to St. Albans from Harpenden on 6th April that saw off the locals 4-1. Stanley, a St. George’s Old Boy, was already well known to the Saints having made his debut for the club during the previous season and he was to spend a further six years with the Citizens. Prior to bringing his own XI to the Holywell Hill Meadow, Stanley had played against St. Albans earlier in the season when he scored twice in St. George’s 7-1 win in Harpenden, Sandford Moore also took advantage of knowing the weaknesses in the Saints side as he scored four times that day.

One of the most notable victories came on 29th September when Tottenham Hotspur were defeated 2-1 at the Holywell Hill Meadow with Moore notching the first home goal. In the Spurs line-up was the long serving Jack C. Jull who was the first Tottenham player to achieve representative honours when he was selected to play for Middlesex. At this time Tottenham, like St. Albans, were not members of a league but the north London club were playing competitive games in the London Cup (later to become the London Senior Cup) and the Middlesex Cup.

An anomaly appears in the Herts Advertiser when in the end of season review it lists St. Albans as having beaten St. Pauls (Stepney) 19-0 at Clarence Park on Christmas Eve. The report from the actual week the game was played clearly states that it was Oaklands who were on the end of an eighteen-goal feast rather than St. Paul’s. The Herts Standard, however, confirms that the opposition was indeed St. Paul’s and, unlike the Herts Ad, gives some indication as to the scorers by stating that, ‘the points were registered by A. Miskin, Dickson, Sharpe and Moore, the latter getting about half the number.’ This leaves open the possibility of Moore having notched double figures in one game for a second time although, sadly, no definite verification of this can be found.

The game against Bowes Park on Boxing Day morning could, possibly, be downgraded to a Reserve team fixture although the line-up did include a large number of First team regulars. The kick-off, 10.30am, proved to be too early for some players and two players were plucked from the crowd while two more were called up from the side due to face Rob Roy in the afternoon. Half-back Hod Paul played in both games and the afternoon match ended up as a ten-a-side affair.

Unsurprisingly, Moore was top scorer for the 1888-89 season with at least 32 goals, including a six, five and two fours. Those goals came from just 14 appearances. As previously mentioned, Moore is thought to have scored at least eight times against St. Paul’s and he may well have had another rewarding day when Rob Roy were defeated 13-2. Ten goalscorer are unaccounted for that day with Moore credited with being one of the three known scorers, it is hard to believe that he did not add significantly to that total. Moore also scored four times during the 8-1 rout of Westminster Criterion but the biggest winners in that final match of 1888 were St. Albans Hospital and the London Children’s Free Dinner Fund as the 6d admission was collected for the benefit of both organisations. 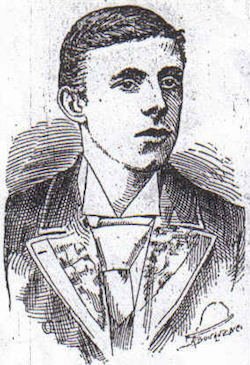 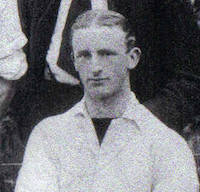 IG SharpeThe game against Hertford Excelsior, a 15-0 win on 20th October, was bit of an unnecessary farce, as the visitors actually only challenged the Saints 2nd XI to a game but ended up as lambs to the slaughter as St. Albans fielded their First XI. Whilst scores of 18 and 13 may make headlines nowadays, the local press was not always impressed by goal feasts with St. Albans rout being described thus, ‘the play as being very slow and not a single point of interest arriving throughout the game.’

Hertford, with plenty of justification if their account of the game is correct, did not take too kindly to the drubbing and the Hertford Mercury did not hold back when criticising St Albans. ‘It is to be regretted that what promised to be an interesting match was completely spoiled either through unsportsmanlike tactics, for the purpose of adding largely to the aggregate of goals, or, to be more charitable, a mistake, though it seems the latter could hardly have occurred after a distinct understanding had been given by the home side that the first eleven should not be put into the field. To make matters worse the visitors were miserably weak, hence the game was neither interesting not enjoyable.’

Due to clubs selecting players from within their own locality at this time it was not uncommon to find several members of the same family turning out for the one club. During the early years St. Albans frequently took to the pitch with a good sprinkling of Webdale's, Miskin's or Gentle’s in their side but the latter part of the decade saw the Sharpe family figure strongly with possibly three members of that family turning out for the Saints during the 1888-89 season. Leading the way were John William senior and John William junior (left), they were joined by the strangely named Ernest Northern Sharpe. In years to come two more members of the Sharpe family, Cecil and Ivan (right) (the latter a noted sports journalist, author and England Amateur international), turned out for St. Albans Abbey and then, briefly, the City club. 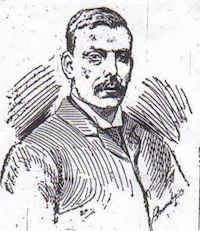 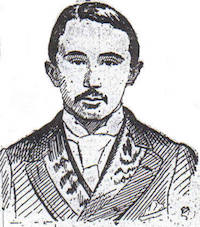 James William DicksonOne of the Paul brothers, centre half-back Horace, or Hod as he was affectionately known, had a benefit match towards the end of the season when on 20th April St. Albans defeated Caledonians 8-0 with W. Sharpe scoring three times. Although not selected this season, Hod Paul was one of many St. Albans players called upon to represent the county, he also had spells with Luton Town and Enfield Town.

Virtually all of the players also featured for other clubs with Sandford Moore, Sidney Stanley, James Dickson and Fred Sargent all playing for Watford Rovers during their F.A. Cup 3rd Round Qualifying defeat at home to Great Marlow on 17th November 1888

Hertfordshire played just two matches during the season, neither of which were at St. Albans, but James William Dickson (right), who set up the Herts goal in the 1-1 draw with Surrey at Watford on 12th December, represented the club in both games. The second match, on 27th March, saw Hertfordshire lose 2-1 to Middlesex again at Watford. The county association held its AGM at the Bedford Head Hotel on 25th September at which it revealed a balance in hand of £11 7s 8d.

We have 665 guests and no members online