The Herts and Middlesex League leaders completed a "double" at the Citizens' expense, but they were just as fortunate to win the return game at Hitchin, on Saturday, as they were to succeed in the first match at Clarence Park . Saturday's encounter, played under almost ideal conditions - apart from a stiff breeze - was exceedingly keenly fought out, but produced a wealth of bright football and held the interest of a large crowd until the last kick.

Except that S. D. Chapman deputised for P. E. Chamberlain at right back, Hitchin Town were at full strength. St. Albans had difficulties in raising a side. Reid, who had been injured in a military match during the week, had to cry off; Wright was on leave; Jack Richardson had to miss his first game of the season owing to indisposition, and W. Saunders decided to rest the damaged ankle which has been giving him so much trouble in recent weeks. St. Albans, however, had strong military reinforcements, including W. Stone, an Artilleryman introduced by Stan Kirkham, at left hack; A. Kinnard and E. Jones, of the South Lancs Regiment and B. Pipe, of the Suffolks, in the forward line, while D. Rand. home on leave, assisted his old club once more.

The Citizens' nondescript eleven quickly settled down to play together with excellent understanding and, with Hitchin Town also combining well, exchanges which were, for the most part, evenly contested. were full of good movements. Hitchin Town were strongest in attack: their forward line, which now totals sixty goals for fifteen matches, an average of four per game, is fast and incisive. St. Albans' best department was the half-back line, where Kirkham, who captained the team in the absence of Richardson, Hall, who subdued Lingwood, and Crossley were all in capital form.

St. Albans' forwards approach work was good, save for a weakness on the right wing, where Kinnard, who was playing out of position, for he is a half-back, never recovered from a vicious tackle early in the game which left him dazed. Robinson gave by far his best display for the club, dribbling cleverly and passing to advantage. Rand and Pipe, a clever little player, formed a good left wing, and E. Jones, who led the Citizens' forwards, made up for his lack of inches by a skill and persistency which certainly perplexed the Hitchin Town defenders. Had the Citizens' finishing been as accurate as their approach work, they would not have returned pointless.

Twenty-live minutes passed before there was any scoring. Then E. JONES gave the Citizens the lead by following up a big kick by Cook. The Hitchin goalkeeper stood guarding the ball while it was apparently going behind, but Jones nipped in to get possession, dribble round the goalkeeper and hook the ball into the top of the net from an acute angle. He might have scored again, but was foiled by his namesake, the Hitchin custodian, who dived at his feet. Then the ball ran loose but there was no other forward at hand to give it the touch needed to carry it into an unprotected goal and Isaac got back to effect a clearance.

Hitchin's wingers bothered St. Albans most. J. T. Jones showed a fine turn of speed and centred to advantage. Cook, who was never perturbed by the barracking to which he was quite unwarrantedly subjected, made many strong clearances, but Stone, who tackled well and used his head to great advantage, kicked poorly and it was an attempt by him to dribble clear that led to the equaliser. He was robbed by Flint. The ball went across to Murphy, who centred to LINGWOOD. He had a clear opening and gave Powell, who kept goal splendidly, no chance.

The teams crossed over on terms and that was a fair reflex of a sternly-fought first half. Hitchin took the lead in dramatic fashion on resuming. It was their kick-off, and their inside men, by clever combination, went straight through for FLINT to score from Clarke's pass without any members of the ‘Citizens' team, which was completely nonplussed, having played the ball. St. Albans fought back in determined fashion and forced a number of corner kicks, but most were wasted, being placed behind. Once E. Jones got through and, with the goal at his mercy, shot wide.

Twenty-three minutes after the interval, however, St. Albans drew level. Crowley placed a free-kick perfectly, and the diminutive PIPE, beating the taller Hitchin defenders in a jump for the ball, headed through. Immediately afterwards, Jones netted following another free-kick placed to advantage by Crossley, but was ruled offside. Four minutes after St. Albans had equalised, Hitchin regained the lead. Theakstone placed a free-kick across the field to CLARKE, who was unmarked, and he netted while a linesman was flagging for offside. The referee, however, allowed a goal and refused to yield to St. Albans defenders' request that he should consult the linesman. Four minutes later, Hitchin increased their lead as the result of a delightful movement. J. T. Jones finished a fine run by lifting the ball across the field to Murphy, who, with a quick return, made an opening for FLINT to score with an unstoppable drive.

The Citizens had the better of the remaining exchanges, but missed chances. The Hitchin goalkeeper made one grand save from Robinson, who eventually reduced the deficit five minutes from the close. He made a strong run on the right and delivered a hot drive which was charged down. ROBINSON, following up, regained possession and beat R. Jones with a capital first-time rising shot. In the closing minutes, a long pass from Crossley provided Kinnard with an opportunity to save a point for St. Albans, but he failed to steady himself and lifted the ball over the crossbar. 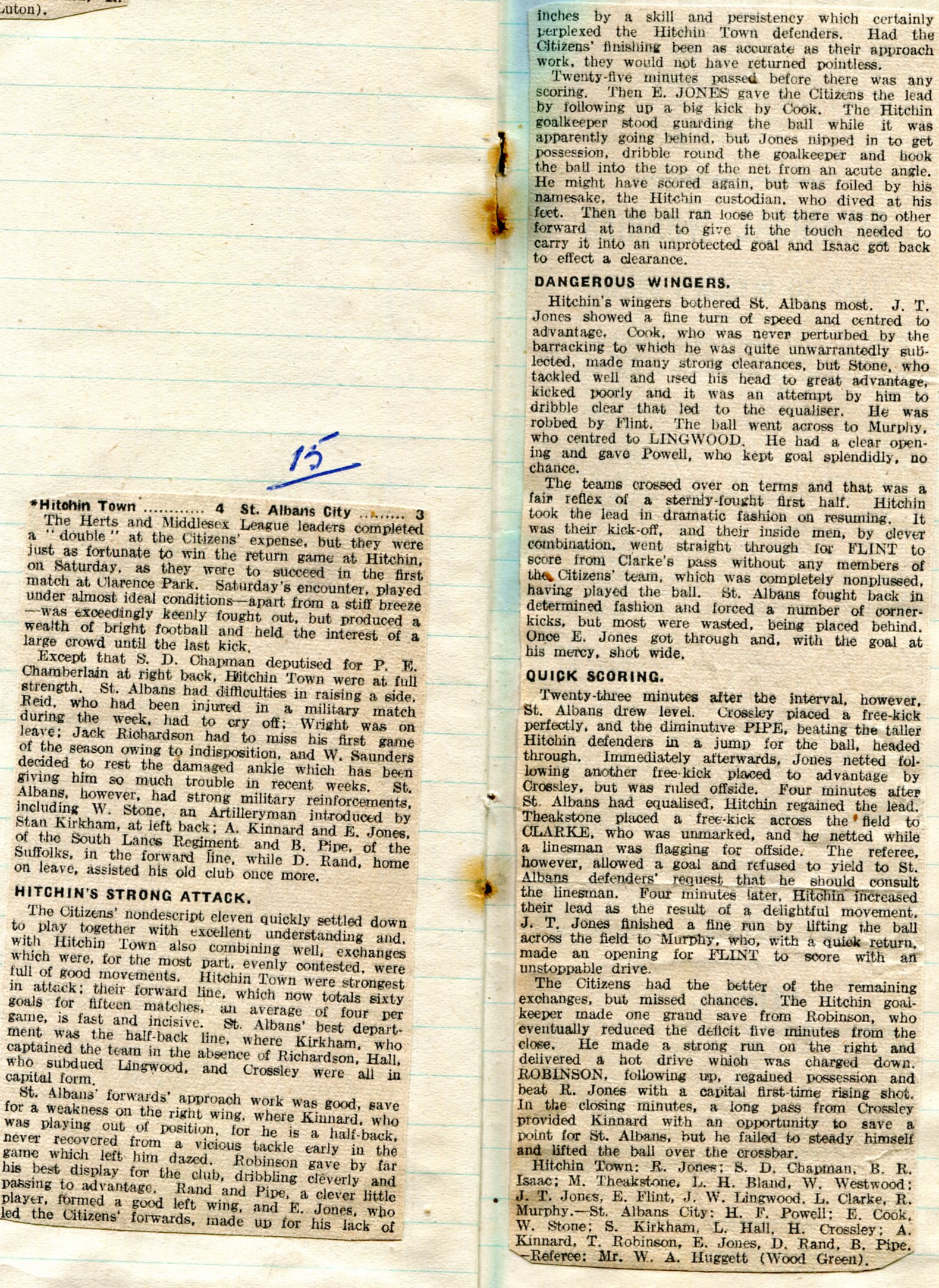 We have 70 guests and no members online